I went to Salute in London, as I do. I was trying to be responsible in my spending, but I still saw and did some cool stuff. I didn't take as many photos as I normally do.

Anyway, here's what I did:

I participated in a speed painting contest, and I won! My job was pretty rough; lighting wasn't great, tools weren't perfect, etc. I think I won because I did a little rudimentary wash on the armour plates and the hair. 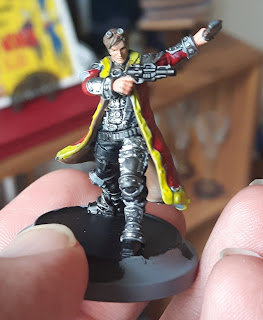 I won a bunch of swag as a result of this contest, including Salute exclusive models from previous years and a set of brushes. I'm pretty excited about these brushes, actually: brushes were on my shopping list. I'm probably going to sell off the surplus models, since I already have one of each of these. 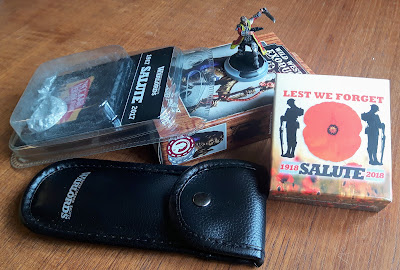 Speaking of free models, the theme for this year was WWI. Last year's theme was a centennial one as well -- the Russian Revolution -- and this year's model was not just one model but three, a little diorama showing British, French and German soldiers at the end of the war.

I'm going to mount them on a plinth and paint them up as a war memorial sort of a scene, I think.

Speaking of WWI, there were some living-history types around, and they had brought a very imposing looking mockup of a WWI tank.

What else did I do? I painted some models at the Mantic paint-and-take, including a couple of the new models from Star Saga. I don't know that I'm going to play the game, but a character in an armoured spacesuit armed with a length of pipe will certainly come in handy in my post-apocalyptic game.

Here are some things I saw: 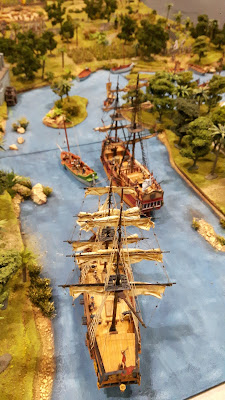 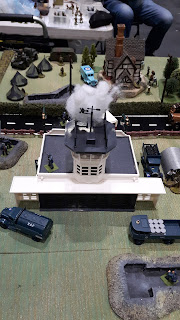 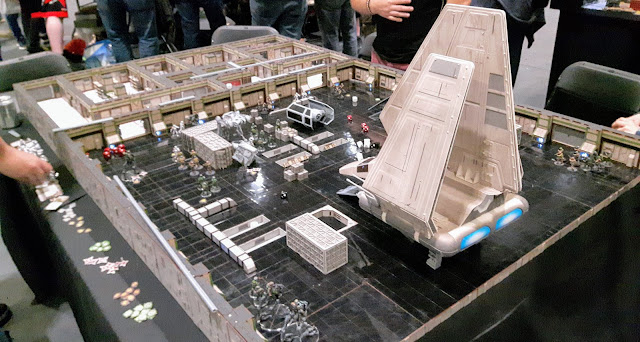 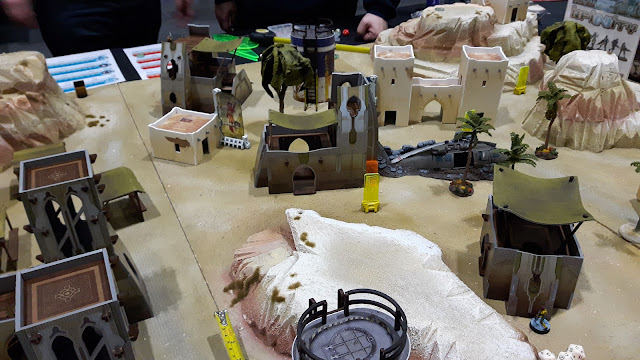 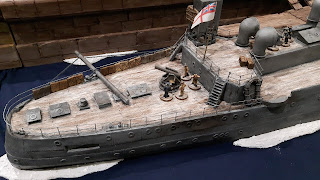 I was pretty restrained in my purchases. I collected some Kickstarter models from Bad Squiddo Games -- photos coming soon, hopefully -- and I bought some models from Bear's Head Miniatures as well. I also picked up some scenery for Frostgrave and Frostgrave Ghost Archipelago, as well as the new FGA book, The Lost Colossus. I'm gonna have to make some colossal scenery. Speaking of scenery, I picked up a prototype Wasteman piece that I hope to be able to show you soon.

It was also good to see friends, including people I don't often get to see other than at wargames shows. You never get enough time to talk to people at the show, but it's still good to catch up and say hi. I do like the post-show social atmosphere of BOYL; honestly, it's the main reason to go on Friday. I had a few conversations that reminded me that BOYL is actually pretty soon and that if I'm meant to be participating in some of the things I hope to participate in I had better get a move on.

The downside is that I have a big project deadline coming up and a lot of words I need to write over the next two weeks, so painting time is going to be pretty limited. In fact, I'm forcing myself to schedule some as a form of stress relief.
Posted by James Holloway at 04:59 No comments: