Earlier this year, I replied to an ad on Facebook Marketplace offering a big job lot of Warhammer figures. I really wanted the plastic Rogue Trader Imperial Guard and some Genestealers that were in the lot, but I also wound up with a bunch of the early multi-part Chaos Warriors. These miniatures are ... not kindly remembered. They're hunched and ugly, and usually thought of as not as good as the subsequent, more upright models with the cloaks. But I had a load of them. 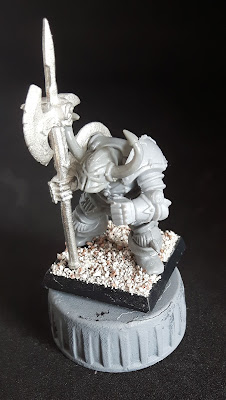 As you can see, they have a stooped, hunched posture with weird, long, gangly arms, and the metal halberd arms are pretty crude. The upper and lower parts of the halberd don't even line up clearly.

Anyway, I decided that since these models were a bit crude and since I tend to play Nurgle, I would paint them up in a beat-up and rusty paint scheme that would focus on overall effect rather than individual detail.

I was inspired by a rust-painting workshop I did at BOYL 2019, taught by Curtis Fell of Ramshackle Games, whose rusty paint jobs have always impressed me. Here's the rust-work I did on the model from that workshop (I later went back and did the cloth and so on). 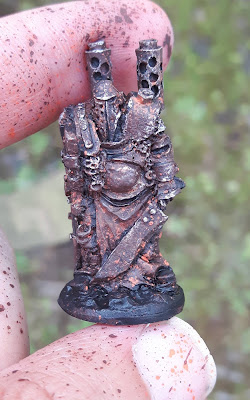 I don't think I achieved the same effect here, but that was the inspiration.

I put my test models together and primed them black. This will be more forgiving for the loosey-goosey paint scheme I'm going to apply. 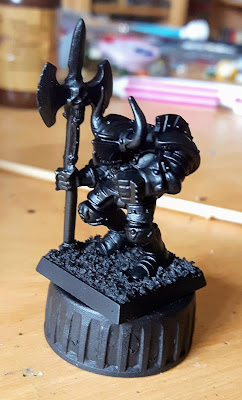 Next, I just took a big brush and jabbed this thing over and over with brown masonry paint to give it the necessary flat, dark brown colour. I didn't care if this clogged up the detail, because ... well, you know. 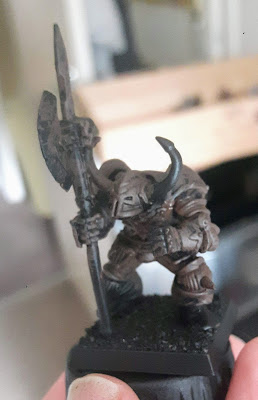 Then I applied a few more stages. Again using a big brush, I applied gunmetal grey over the exposed edges and points, bringing out the edges of the armour plates, blades and so on. Then I flicked watered-down orange-brown paint at the model with a toothbrush to add some rust.

I picked out a few details in a bright fluorescent green that I thought would stand out against the dull background. 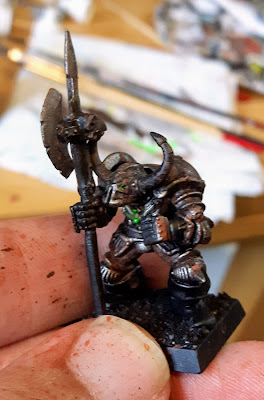 Next, I went back and tidied up some sections with thinned-down black. If there were soft boots I did those, for instance, I painted the weapon hafts, and in some places I cleaned up the joints between armour plates. I also added some bone colour to the decorative skulls, the horns, and what have you. 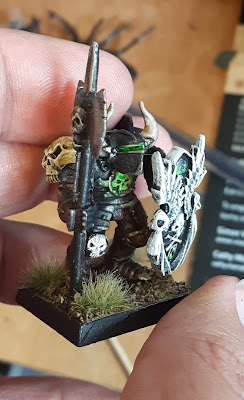 I wanted to add one feature to each of these guys that would stand out, and I resolved on giving them weird shields. I went into the bits box and pulled out various bits and pieces that would do, including some Reaper Bones shields and a Renedra tombstone. Then I did the bases. 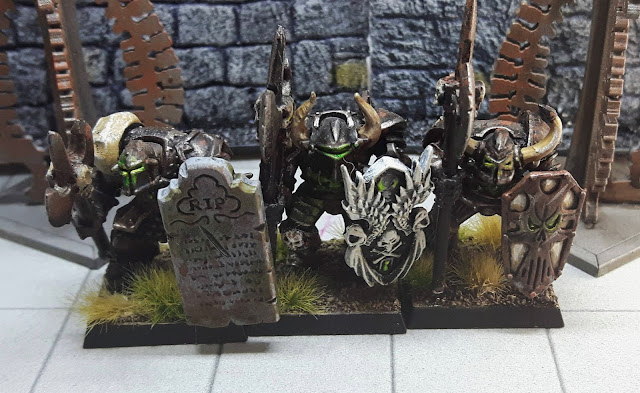 I've got three in so far, and I think they look pretty OK! I'm going to do a leader and a standard bearer to bring them up to a standard unit of 5, just to complete the project. But for models I can polish off in a spare hour or two, I'm really happy with them.
Posted by James Holloway at 01:20 20 comments:

As you know if you read my blog, I like making cheap gaming materials from junk. This is for several reasons: I like the stimulus to creativity, I like the affordability and I like reusing things that would otherwise wind up in landfill.

So imagine my delight when I discovered the Cambridge Community Scrapstore. This is a place you can go that's just basically a big warehouse full of crafting bits and bobs. I bought a membership and have been a few times, filling my cheek pouches with bits of fabric, card, and miscellaneous junk.

Among the things I got on my first trip were some sheets of fake grass material. I marked out some rough shapes on the back of the sheets with a silver Sharpie, then cut them out with a utility knife. 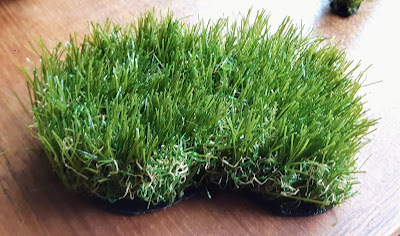 At this stage, I also brushed the fake grass material a lot because it sheds like mad, especially if the cuts go through the base of a tuft.

The base of the material is flexible, but I wanted to stiffen it a little, so I hot-glued the pieces to sheets of card, which I also got at the scrapstore. 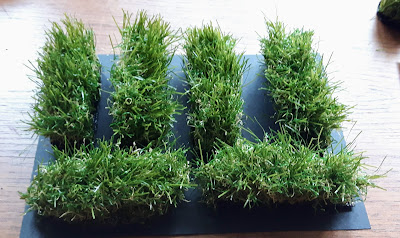 I then cut out the shapes, leaving a little bit of a lip around each one. After cutting out about a third of my grass material, I had enough to fill a shoebox. 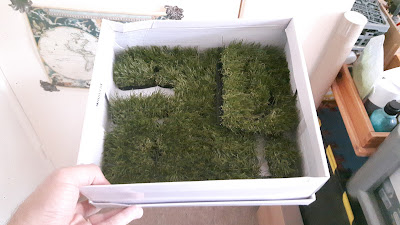 These pieces then got a bead of hot glue to seal the edge between the grass material and the card, then a layer of PVA and sand. I let that dry, then painted it light brown with a lighter drybrush and called it good. 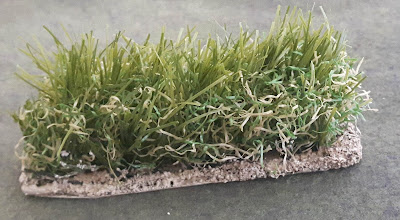 As you can see, they're a bit rough and ready, but at a price of pennies I'm perfectly happy with them. They'll serve as reed beds in Frostgrave: Ghost Archipelago or my Crusades games, or long grass in other settings. Here's the same patch of long grass with a model for scale. 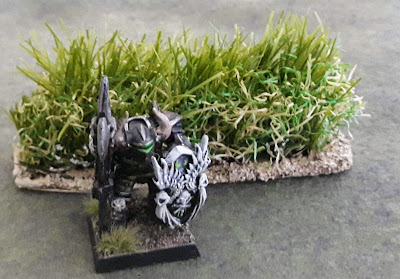 Apparently, these scrapstores aren't uncommon, so if you like to trash bash you should see if there's one in your area. I expect more frugal gaming posts inspired by the things I find there.
Posted by James Holloway at 01:35 8 comments:

I have been painting some things!

I realise this blog has been quiet for a long time. Blame the siren song of Facebook and the less siren but much more remunerative song of blogging for the Gaming the Crusades project! However, I was inspired by my annual trip to Bring Out Your Lead to get some painting done in the week or so afterward.

First on the table were these models from a standby of this blog, ThunderChild Miniatures. By now you know that I love Jason Fairclough's 3D-cartoon style, and these little guys are no exception to that rule. I bashed the whole squad out in a relaxing Sunday afternoon. Very simple paintjobs but I think they came out quite nicely. 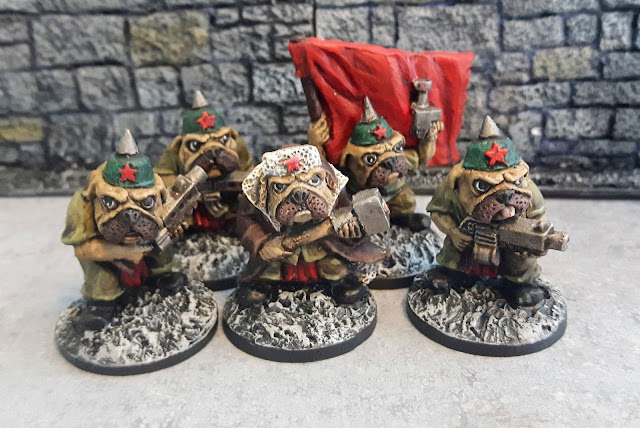 Next up is one of Mark Copplestone's lovely halflings from the old Grenadier fantasy range. I believe this little guy is still available from Mirliton, although I haven't checked. He was part of a very thoughtful gift from a friend literally years ago -- in fact, I got him around BOYL 2016, maybe? Anyway, he is great and will represent my character, Lucullus Mortsafe, in a D&D game even though the game does not include miniatures. If I had him to do over again I would redo the sleeves; the contrast between the layers is too stark. Also the primer went on quite grainy, although you can't really see it here. 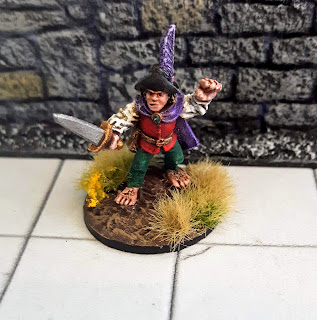 These Daleks are from Doctor Who magazine and now that I look at them I realise that they are of two slightly different designs. Curious! Anyway, I primed them and then "painted" them with silver and black Sharpie. I'm not gonna do that with the grey primer again; it was a real hassle. 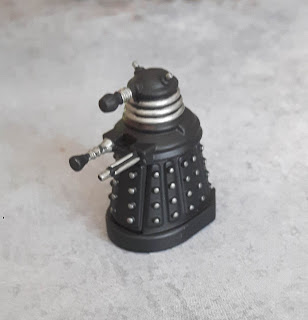 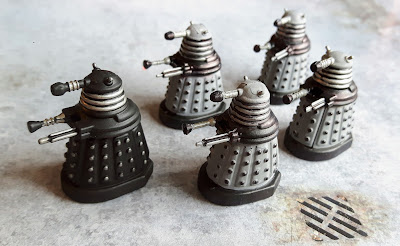