So another thing I picked up while at UK Games Expo was Forgive Us by Kelvin Green, a supplement for the Lamentations of the Flame Princess RPG -- although like pretty much everything for LotFP, it should work super-easily with anything based on old D&D, and pretty easily with more or less any similar RPG system. There's not a whole lot of mechanics. 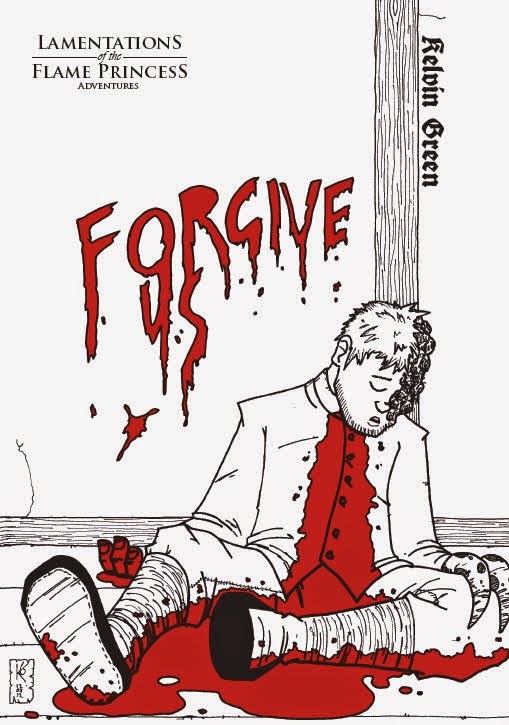 It is both written and illustrated by Green, and it looks superb. It's in a little A5 paperback, and the layout is just so clean and smooth. Observe: 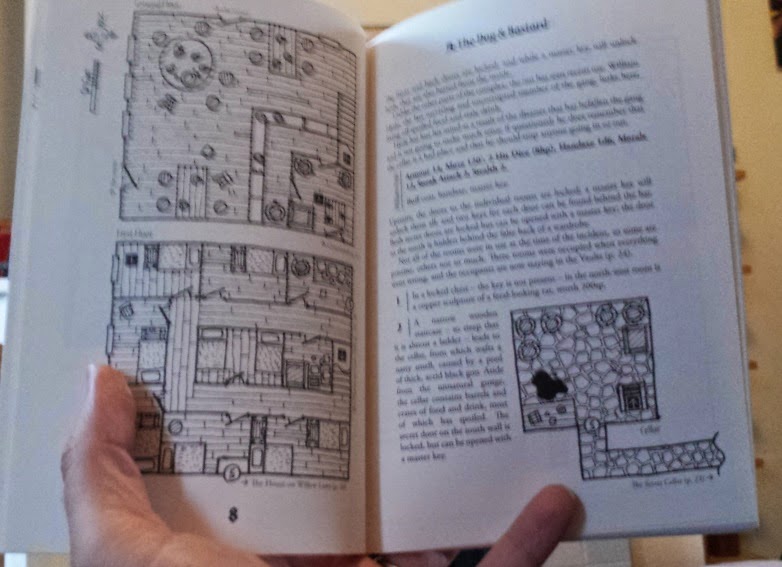 The really clever thing is that the main scenario (there are three in total, one big one and two little ones) has its "dungeon" in the form of a complex of connected buildings -- so it's effectively broken up into modular chunks, each of which has just enough map and text to fit a two-page spread. It's really readable. Check out the little indented sections on the right-hand page up there: the top one is the stat block of a character encountered in the building, and the bottom two are specific descriptions of the numbered locations on the map. So easy to look up!

OK, so the book looks terrific. What about the scenarios themselves? I'm not going to go into too much detail, because I intend to use these in my game and I expect that at least one of my players periodically reads my blog. I will say that it's nominally set in Norwich(!) in 1625, and that it deals with scoundrels, theft, secretive cults and grotesquerie.

"Hmmm," you say. "Scoundrels, thefts and grotesquerie in a 30 Years' War setting? I wonder where I've heard that before." And it's true -- this scenario is very WHFRP-ish. In fact, you could run it in WHFRP with about 15 minutes' prep (figuring out spell lists for spell-casting NPCs would be about it). Green even says in his intro that he was inspired by White Dwarf scenarios from the golden age, and the influence is very clear. Which is a good thing.

My own campaign is scumbag-heavy and magic-light, so Forgive Us is perfect for me. I think I will probably invest about half an hour in changing the scenario to be more consistent with my own game (oh, and I will probably half to come up with some D20 stats for the monsters, so maybe make it 45 minutes). Even if your campaign doesn't dovetail so well with the way this one is presented, there's a lot of good material in here that you'll be able to use.

I paid £10 for this book, which seems like a lot (by my standards anyway) for such a small book, but when I consider that I'll probably get 3 sessions out of the main scenario and one each out of the remaining two, that's pretty good value for money. You can also (if you like) buy the PDF on RPGnow for under £5. As a side note, the A5 format of this book would probably display really well on a typical computer monitor with two pages side-by-side, considering that most game book PDFs are a pain to read on a laptop. And a single page should display cleanly on a tablet, although you'll lose the cool side-by-side presentation, I should think.

So, yeah, it is good quality.

Honestly, the only thing I didn't like about it was when he talked about the White Dwarfs of that era and that made me feel a stab of regret at selling off all of mine at a flea market about 11 years ago. I did really need the money, though. I bet the good scenarios are all on the internet somewhere, though.