Nostalgia overload: rich beyond the dreams of avarice

Way back in the day in 1996, I joined the Cambridge University Roleplaying Society. They were a lovely bunch of folks who introduced me to people I'm still friends with today. They had a library of RPG books, but we mostly played World of Darkness and the library mostly contained other games, so we didn't get much use out of it. Over the years, I believe the library went even more out of circulation until eventually it was barely used.

So when they finally recovered it, they started selling it off to clear out the old D&D stuff and other games people in the society don't play and replace them with games published in the last 15-20 years. I picked up a few items from the library for my collection, but I also received an incredible bonus.

The society just gave away a bunch of their old magazine, allowing me to expand my run of White Dwarf from the golden age. 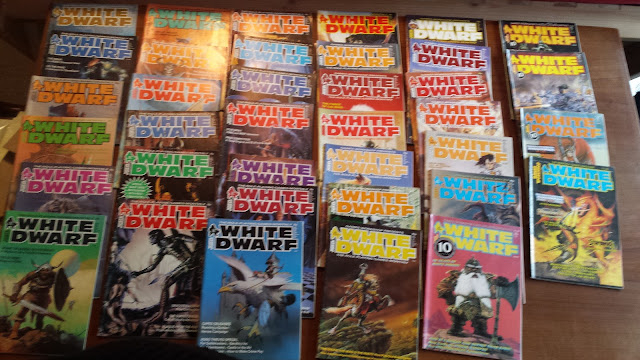 Just look at it. It's glorious. I'm so thrilled by its very existence.

Back when I lived in California, I used to pick up old White Dwarfs from the used shelf of my local gamestore for like $0.50 or $0.99 each and pore over them. There was quite a lot of Call of Cthulhu and Paranoia, which were my main interests in those days, but the other stuff was an interesting glimpse into another gaming culture. Also pretty pictures, miniatures, etc.

Reading through these things is absolutely fascinating. Most of the mechanical stuff for AD&D and Runequest and so on isn't really useful to me, but some of the scenarios are quite good; I definitely have a few that I'm going to be using at the table. And the discussions about the state of gaming are compelling; sometimes they're fumbling toward solutions that exist today, and sometimes they're having the same arguments we're having today.

There are a lot of notable names in here from the world of science fiction and fantasy and so on. In addition to well-known game designers, we've got game articles from people like Charles Stross, Garth Nix and, of all people, chaos magician Phil Hine. Colin Greenland wrote the movie review column.

With the collection I also got a couple of various magazines including these homemade zines, which were ubiquitous back in the day. They're amazing. 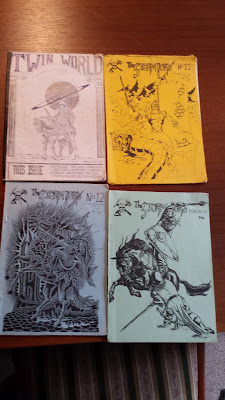 Now, if you're into this stuff, I'm selling off the duplicates! Proceeds go to buy new games for the society. Let me know if there's anything you're interested in. Here's a list:

I'm in the UK and can ship them to wherever or hand-deliver them at Dragonmeet. I'm assuming that we'll say about £5 for the compilations or £1 for an issue, but if you think I'm way off base in any direction just let me know.
Posted by James Holloway at 01:23