It's week three of the Monster Man contest, and there's some big news, but there's one really big item:

The contest submission deadline has been extended to Thursday 30 November!

Basically, this is just because I know a lot of people are still working on their entries and "the end of the month" is really easy to remember.

I mentioned listener Edwin's 24-hour charity gaming stream in my last update post. Well, it went very well, with Edwin and his friends raising a lot of money for children's charity Extra Life. I don't know if any of the Monster Man contestants sent in their monsters, but I did one, and apparently it was well received. I haven't seen it yet, because I was out all day Saturday, but apparently it's somewhere in the second 12 hours of the stream. I don't know if I'm going to watch 12 continuous hours just to spot something I made, but we'll see. I will be posting the monster up once I've got its writeup done properly and the model painted, though. Here's a preview photo: 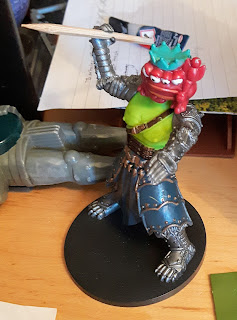 We've had a few more great submissions. I'm going to post the full entries once the submission period is over, but here are some photos:


I'm really looking forward to making these available for voting, but there's still plenty of room for more submissions, so get cracking!
Posted by James Holloway at 05:53