Earlier this month, I posted that I was going to start a new tabletop campaign. How's it going? It's going well.

Character creation went smoothly. The random mutation tables in Other Dust van produce some pretty bizarre characters, and I was worried that players who started with strong concepts wouldn't enjoy seeing them get derailed by random rolls (although you can get out of this using the rules as written), but people got into it and there was much laughter.

I use miniatures in a lot of my games, and most of my players are also fans, so they have created or are creating minis for their characters, adding mutations and so on. It's pretty cool. I don't have photos, because the light isn't quite right in the evening, but here's one of the model for my wife's character, which I hurriedly painted just before the first session. I'm going to go back and touch up some details. 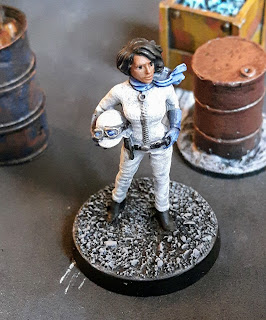 The original model is "Talia Torino" from Crooked Dice, who I take to be Penelope Pitstop.

Anyway, we have a good mix of characters: a tough survivor thrown out of her enclave for being a mutant, who's lived in the wilderness as a hunter ever since; a scientist exiled from his enclave for violating their law against advanced tech; a gunfighter betrayed by his own gang and a corrupt judge; and a diplomat from the pre-apocalypse world who only just emerged from suspended animation.

Session one saw all four PCs escape from having been captured by baddies, who were going to sell them into slavery in a remote northern location called Emerald Lake. Reesix (the wild woman) thought this was a bit odd, since she had heard of Emerald Lake only as a quiet enclave in a remote spot. They staged an escape, which involved Jaime (the diplomat) distracting a guard, Twiggs (the gunfighter) bashing a guy with a big rock, and Jeb (the scientist) shooting four people with his cactus spines ... including a member of his own team, who went down and had to be revived with patch stims (which fortunately, having been stolen from Jaime, were in the bandits' cart).

They also befriended another prisoner, Femi, a monk originally from the enclave of Credo, who told him that a party of his fellow monks had gone missing in this area looking for something called "Transfer Station 70." He had come to find them but been abducted by the bandits. They headed to the nearby transfer station, hoping to find shelter to rest and heal their injuries. They found traces of the missing monks, but no one was to be seen.

The next day, with the injured feeling a little better, they decided, at Femi's urging, to continue the search. A hatch in one of the transfer station outbuildings led down into some kind of tunnel complex, and the stub of a candle spotted on the concrete floor below suggested that the monks had been down there. Holding their breath against the chemical stink, they descended ...

Of course, this bare-bones summary doesn't give a sense of the overall feeling of desperation and the laugher around the table. They were very pleased when they found a device to recharge batteries with, for instance, and they felt very fragile in the combats. Jaime went down in one shot (from her own side, no less) and the other characters who were hit were very aware that they couldn't get hit again. I started them off with some points of Hunger to give them a sense of urgency and that seems to have worked as well.

Overall I'm very pleased with how it's going so far!
Posted by James Holloway at 03:55

Email ThisBlogThis!Share to TwitterShare to FacebookShare to Pinterest
Labels: Other Dust