By the time you read this, the second session of my Other Dust campaign will already have happened and the players will probably know all of this. However, there might be one or two things they haven't spotted, so if you're a player in the campaign, you might not want to read this.

OK, everyone gone? Let's take a look at how I created this short Other Dust scenario. There isn't a lot that's system-specific; it's really just an example of how I develop an idea and the value of random generation!

To begin with: I started out with the parameters of a randomly-generated ruin from the Other Dust rulebook. I knew that this place was a former research establishment that people had attempted, but failed, to reactivate. I also knew that it was inhabited by "beasts." I initially planned for it to be inhabited by a pack of wild Gorehounds who would attack the caravan that was holding the PCs prisoner, giving them an opportunity to escape. But they up and escaped anyway without my intervention, so that was OK.

I had decided that the party trying to restore the Transfer Station were a group of monks from a settlement named CREDO. The random rolls for CREDO produced some weird effects: it was a theocracy that had access to a very powerful piece of pretech but was otherwise medieval-level in its technology. I decided that the ruling caste of priests had some knowledge of pretech but everyone else was at a swords-and-horses level. I then decided there would be a heresy within the faith that was interested in going out and getting more pretech, while the conservative rulers would object to anything that diminished the uniqueness of their big pretech doodad.

As a result, among the prisoners I put another CREDO monk, who had gone looking for his missing colleagues after they never returned from their attempt to reactivate the site, which I named Transfer Station 70. I still hadn't decided what the station actually did, and after the gorehound attack became unnecessary I started to get the sense that simple predators weren't interesting enough to be a main antagonist -- they had been intended to be a complication in a battle with the bandits.

So the last session ended with the PCs about to descend into the access tunnels under Transfer Station 70. I improvised during the session, saying that the Station was a nanofabricator facility -- a neutral nanobot slurry was pumped in here, then encoded with the requisite programming and pumped out as everything from construction material to shower gel. Lot of nanites in the Other Dust setting, where "nanite" = "magic" throughout.

So, over the next week I had to figure out what was down there, based on the following information:

So I sat down to think about a background. Now, I have mentioned here before that this game uses miniatures. They're not vital, and I'm not picky about positioning, but I do feel that a game with a strong visual inspiration component benefits from having something like them -- and anyway, I just enjoy painting. I decided that for my antagonists in this scenario, I wanted to use the Melty Men, some cool models from ThunderChild Miniatures. 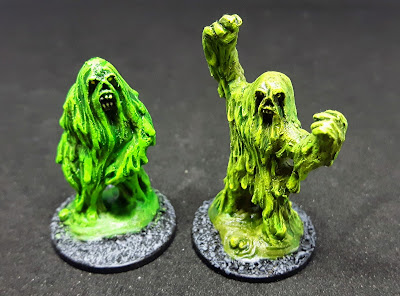 However, I only have two Melty Man models, so that wasn't going to be enough. I decided that there would be an intermediary stage, someone who was not yet completely transformed into a Melty Man by being immersed in wildly malfunctioning nanovector slurry. I later decided that these were what you got when you put a corpse, rather than a living person, into the slurry. I used some army men and hot glue to quickly knock up three of these zombie-like creatures. 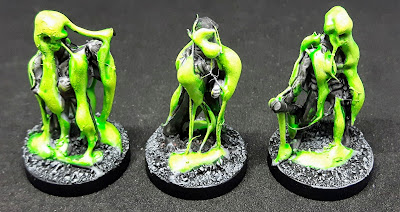 They're a little bit rough, but they were essentially free. Working with cheap materials and not paying attention to the fine details is part and parcel of creating single-use miniatures. If they cost a lot or took a long time to paint, you'd never make them, or at least I wouldn't.

Initially the fact that they're wearing some kind of uniforms was just "eh, they're army men," but it would later come to be significant.

So here's the outline I roughed out: 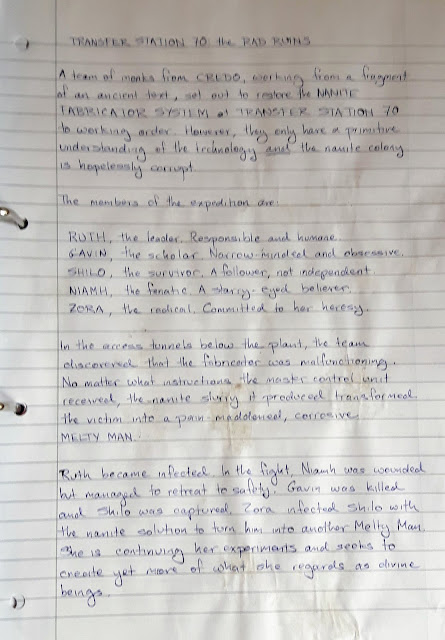 It doesn't look very good, but that's because the cat walked on it with muddy paws.

You may notice that Zora lacks a goal; what she winds up doing sort of depends on how the PCs interact with her. She basically comes from a religious context that tells her that pretech machines are divine. This one seems to want to turn people into glowing sludge monsters, which is definitely weird, but who is she to question the divine will? She's not completely out of touch with reality, though -- she's just got really bad tunnel vision on this issue. She could be persuaded to help shut down the machine, as long as the PCs are willing to overlook the fact that she turned her own colleagues into monsters. (Update: they killed her with a grenade and didn't give a heck.)

Anyway, I then pulled out my dungeon-mapping pad from Squarehex and roughed out a map. 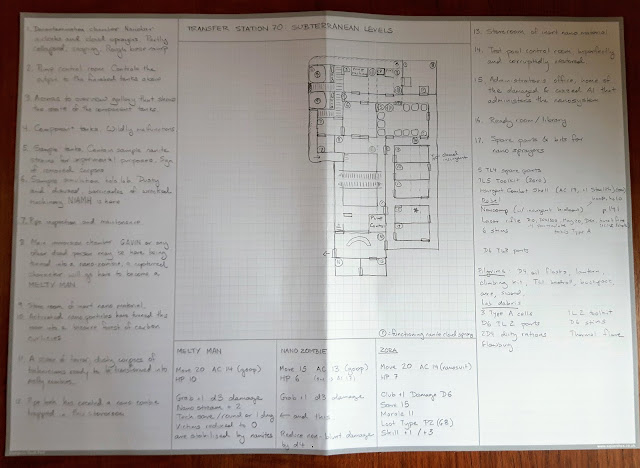 In retrospect, it could have been twice as large, but I left myself some room in case the session runs over and I want to link the complex to some other underground feature. (Update: it ran bang on the dot, reaching a satisfying conclusion just when it was time for everyone to go home.)

I ginned up some stats for the Melty Men and then went to do generate some loot from the random loot tables. I got a good amount of military equipment, as you can see, including an Insurgent Combat Shell and a laser rifle. It seemed that the backstory of Transfer Station 70 was developing.

I decided that there were dead insurgents scattered throughout the complex. This seemingly innocuous civilian nanofabricator had been making, I dunno, something to keep the population docile. An insurgent squad had attacked it during the panic of the immediate apocalypse and managed to shut it down, but most of them had died in the process. Now that Zora has reactivated the corrupted fabricator (you kind of have to know about Other Dust's apocalypse for this to make sense, but basically all the magic nanites got turned evil, which is much more sciencey sounding than radiation in 2018), it's turning their bodies into melty zombies. The navcomp contains the coordinates for the insurgent base, which might make a fun adventure location.

So we have a main antagonist, two different kinds of minion monsters, a subplot and some fun environments (it's not very clear in the photos, but there's a pipe level below and around the complex that the Melty Men can flow through). That should be good for a session, and it's all on two pieces of paper, only one of which I'll really need at the table.

Update: the players used sample nanites from the decontamination units to reprogram the system to stop making evil goo and remove the infestations from people. They managed to save Gavin, one of the monks, although they killed the other one before they realised this was possible. The session ended with two PCs on zero HP and the remaining two with three HP between them, which makes me think I balanced it pretty well.
Posted by James Holloway at 00:59

Email ThisBlogThis!Share to TwitterShare to FacebookShare to Pinterest
Labels: Other Dust, post-apocalyptic