Shadow War Armageddon retrospective: or, in defense of bad games

Back in the autumn, I joined in the Shadow War Armageddon campaign put on by the fine young people of (deep breath) the Cambridge University Roleplaying and Tabletop games Society, hereinafter CURTS. This was just after Shadow War Armageddon had come out, and I was keen to put my Orks to good use. The campaign has now wrapped up with a big final bash, and although I missed a few sessions I feel like I played enough to prompt some thoughts.

So, first off: it seems like I spend a lot of time talking to people who care a lot about game design, and I sort of care about it myself. This leads me to think about games in design-y terms sometimes. In those terms, Shadow War Armageddon is ... well, I don't know if it's a bad game, but it ain't great. It has the following flaws:


Now, all of this sounds like I didn't like the game, but actually ... my view on it is much more equivocal. I had a good old time playing in this campaign, although getting all the terrain to a place far from my house was a bit of a nuisance. Still, I was getting the hang of it by the end. I'm gonna buy one of those crates with the little rolly wheels.

Sorry, yes -- I enjoyed it! I mean, it's not going to win any awards, and if it does there's something fishy, but its very goofiness works in favour of it. Its high level of randomness and its goofy exceptions wind up provoking more laughs at the table than frustration, and it produces the kind of wargaming moments everyone likes -- moments that illuminate the personalities of the players and get retold at subsequent sessions. The thought of one of my Orks running around carrying a lectern, proudly proclaiming that he was the Boss now because he had a table, or Badlug squishing people like grapes with his power klaw and then, surrounded by the corpses of his foes, deciding it was time to bottle out, is good for a laugh.

I've mentioned that randomness cancels out the balance issues to some degree, but another thing that can compensate for balance issues is a general attitude of insouciance and/or inexperience. In a group that was half veteran killers and half total rookies, the weird disparities between some of the kill teams would have been frustrating, but in a group mostly composed of beginners no one really tried to build some ultimate murder squad. I encourage this attitude. 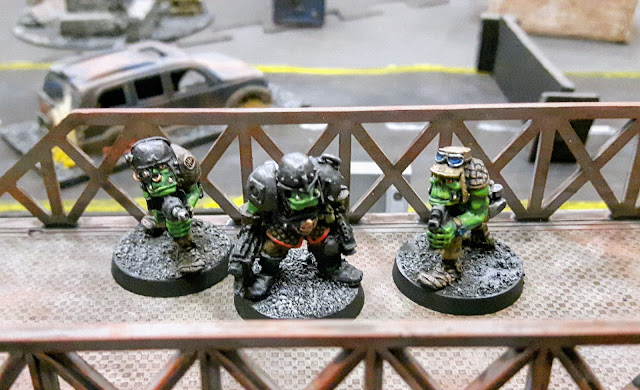 GW games are expensive, but they have this weird effect where their shared vocabulary works in favour of them. If Shadow War Armageddon were released as a spin-off for, I dunno, Beyond the Gates of Antares, no one at CURTS would play it, partly because they wouldn't already have models knocking about to play it with and partly because it would be unfamiliar to them. It was really interesting to see how the one guy in the group who didn't have a lot of familiarity with 40K struggled -- you sometimes forget that not everyone grew up with this game and take for granted the ability to, I don't know, tell a flamer and a meltagun apart at a glance and assess their relative capabilities.

(I feel bad because I think I was a little hard on that guy, actually; I am 90% more chilled out than I was when I was younger, but sometimes I still get impatient and I ought to learn to relax about stuff more.)

My main point is that the familiarity does have genuine benefits. On paper, Shadow War Armageddon is a hard game to learn. In practice, a huge segment of the gaming population already owns the miniatures and already understands what the statline means.

This may be for historical reasons that are more to do with savvy marketing and fun IP than how good the game is, but here's a question for you: who cares? Game designers, I have no doubt. Other than them? 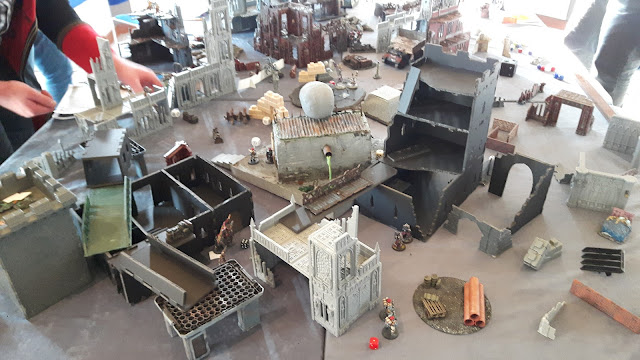 So take a look at that photo. That's the final game, with seven players playing on an 8 x 4 (ish) table. You can see that there's painted terrain, stuff scratch-built out of foamboard, fantasy terrain, terrain made from junk, army man toys, I mean the whole bit. The whole thing's a mess. But it was a ton of fun.

And that's really important for me to remember. Like a lot of people who are into miniatures gaming, I spend a lot of time paying attention to the writings and works of people who are much better painters and terrain makers than I am. When you do that, it can be easy to feel frustrated about what you perceive as your own lack of progress. But this game was set up pretty quickly and there were all kinds of interesting sightlines and tricky angles and people cursing the terrain and people forgetting where models were hiding, and much laughter. And it has stuff people made themselves, and creative use of found objects -- the things I love!


I have often lamented that there doesn't seem to be a sci-fi Frostgrave. I have to confess that I haven't tried Mini Gangs yet, even though I have the rulebook, and I have backed the Factious Waste Kickstarter, so I guess there's that, but I haven't found a game that gives me the simplicity and the ... interesting swinginess? ... that Frostgrave does. I absolutely accept that it isn't perfect, but right now I think it's very close to my preferences in a skirmish game. I just want the same thing but with aliens and zap guns, which may be the root of my problem.

In short, then, I have had a good old time over the last two terms playing a game that is ... let's call it flawed. My enjoyment of this may be more revealing in terms of my priorities than the actual game, but as I've got older I've found that I care about games in the abstract less and much more about my own priorities -- this is because I'm no longer really interested in universalising from the stuff I care about. I'm just interested in meeting my own specific goals.

And that's why a game that isn't all that great can still be a lot of fun.
Posted by James Holloway at 03:30