Inquisitor on the cheap: fun with 54mm models

A few months ago, I was chatting with Curtis of Ramshackle Games. I had just been notified that a lot of my classes had been cancelled (I am fine; please don't worry) and I was feeling a bit down. We got chatting about playing games with larger-scale figures for that proper "toy soldier" feel; we also discussed the old GW game Inquisitor, which used 54mm scale models and consequently always felt a bit inaccessible because of the high price point. He mentioned the cheap toy soldiers produced by Russian firm Tehnolog. Browsing eBay, I discovered that I could get a random assortment of 50 models for under £30.

I have always had a bargain problem. The mental conversation goes something like this:

Also me: It's not a bargain if I don't want 50 models in the first place.

Me again: But think of the savings!

So that's how I wound up ordering 50 random 54mm models off eBay. It was a nice little treat to get myself in an uncertain time, and as I made the transition to working from home I had the fun of anticipating when my armyman playtoys would arrive. And arrive they did! 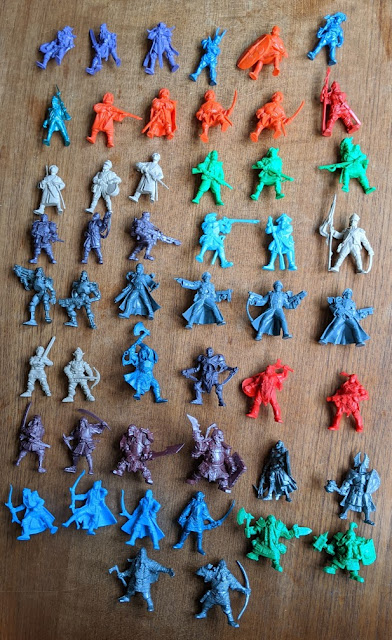 As you can see, I got a pretty good mix. There are elves, dwarves, knights, Vikings, samurai, orcs, undead, futuristic soldier types, historical soldier types ... all sorts. A pretty promising start for some future-fantasy conversions. I decided my party would be the crew of a Rogue Trader. These are the flamboyant space pirate crews who act as deniable agents of Imperial interest but often include lots of shady characters. Unlike most groups in the Warhammer 40,000 setting, Rogue Trader crews are highly diverse, and could include robots, aliens, mutants ... whatever! It seemed like a good start for an adventuring party.

I began with my Rogue Trader himself. I loved the authoritative pose of the Cossack officer figure, but I wasn't wild about the hat. I decided to cut the fancy tricorn-hatted head off one of the figures representing soldiers of the Preobrazhensky regiment. 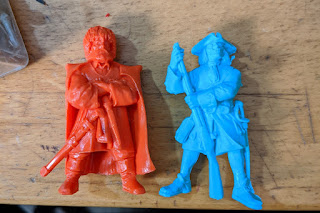 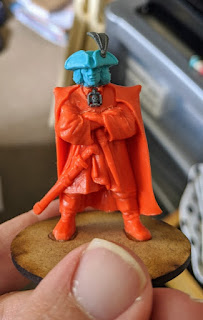 I added a few flourishes and we were off. One of the things I learned here was that scale is very much an illusion. The plume and ornament here are from GW models -- nominally 28mm -- but they look fine on the 54mm character. In the heroic sculpting style of GW minis, items that the viewer should focus on, such as weapons, can be very exaggerated in size, meaning that they look much larger when you put them on more realistically scaled models. 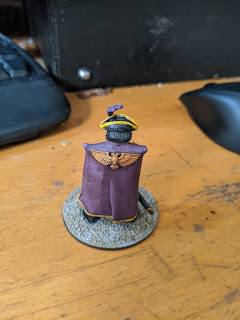 I also gave him some Imperial bling for the back of his cloak. 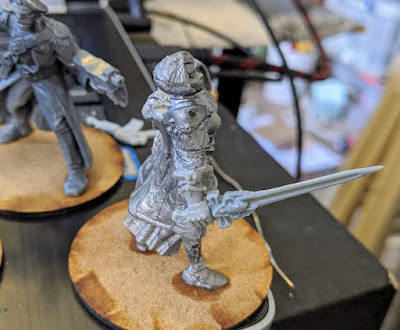 As soon as I saw this Joan of Arc type model, I knew she would be a great Sister of Battle. She even has the distinctive bob haircut that you see on a lot of those models. I didn't like the weapon she was carrying, so I cut it off, together with the whole forearm. The replacement right arm is from an old Chaos Warrior, and the sword is a Reaper accessory. I thought the hooded, winged figure looked suitably spiritual. 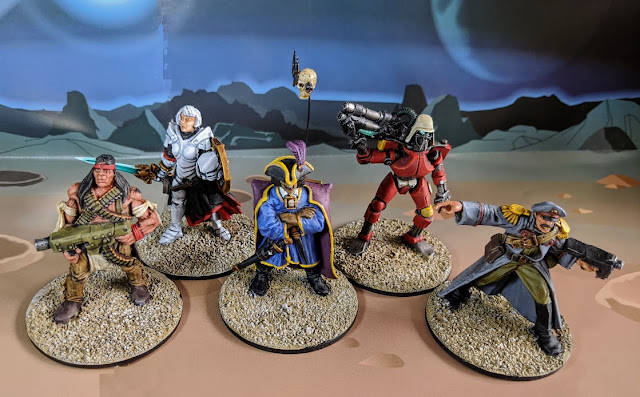 And here they are, my Rogue Trader crew! From left to right:
And that's the crew! Next I need to work on some opposition for them. I'm thinking a Chaos cult -- and, unusually for me, I'm thinking Khorne rather than Nurgle! Time for a little change-up. I'm going to make them as filthy and gore-splattered as these guys are clean and colourful. 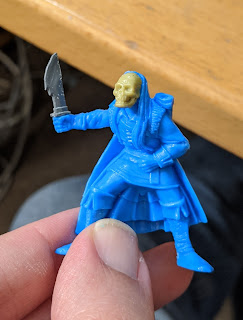 I also sent off selections of models to a couple of other people who created their own warbands. One of those was game designer and publisher Grant Howitt, who has just posted photos of his cool Inquisition party. Check them out here!
Posted by James Holloway at 03:21