Halloween monsters in D&D: or, stuff that shouldn't work but does.

Right -- it's Halloween tomorrow, so let's talk about monsters. 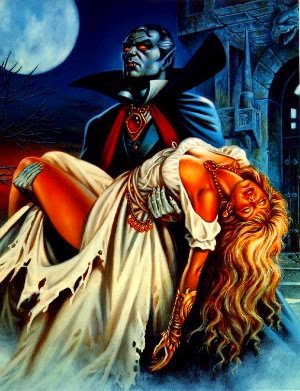 You can see this principle at work in D&D easily. Some monsters -- owlbears, for example -- are just very dangerous wildlife. Others are stand-ins for various human stereotypes -- orcs as brutish barbarians, hobgoblins as military stormtrooper types. Yet others are much more science-fiction-y and often have a kind of puzzle element to them. I'm trying to think of an example right now, but the only one that comes to mind is beholders and I think that isn't 100% accurate. Anyway, my point is that D&D and similar games mash up lots of different monster types, in ways that probably shouldn't work.

Let's take the vampire, for instance. Vampires turn up in a lot of media, of course, but when they turn up in horror stories it tends to be personal. There are very few horror stories -- as opposed to paranormal romances or comedies or whatever -- in which a vampire is part of a larger monster-y context. Vampires are individual monsters, or at the very least a little conspiracy of monsters.

The vampire's horror comes partly from how unnatural it is, partly from the way it transgresses social conventions (which is also why it's sexy), partly from its spooky powers. But in a setting that's completely different from ours, where magical powers are commonplace, a vampire shouldn't be really scary. He's basically a particularly buff stirge in a tailcoat, a wizard with a few extra powers.

And yet, I think that vampires do tend to work in D&D. I have no problem having them in my game, certainly, although they haven't really come up yet. But my experience of most horror monsters in fantasy games is that they don't work too badly. I think this is to do with the way D&D is usually pretty comfortable genre-hopping.

I liken this to early Doctor Who -- back in the day each new story was not just the same characters arriving in a new location, but very much the same characters arriving in a different genre. "The Romans" is full of weird farce, "The Gunfighters" is a parody of westerns, but others are horror stories, historical adventures, and more-or-less straight science fiction. My campaign tends to work in discrete episodes -- usually anyway -- so perhaps that's part of it; each sequence is its own thing so each sequence has its own genre elements.

I'm not sure if that's reflected in published scenarios; obviously, when TSR decided to horror things up they created their own horror-y setting for it. Someone with more knowledge of the history of D&D could tell you.

On the other hand, this may not be a feature of D&D specifically, since as far as I can tell Frankenstein's-monster-types don't work in D&D at all. The idea of a "flesh golem" just thumps the whole Frankenstein thing. Perhaps it's because the monster's thing is pretty much just where he comes from. He doesn't have any special powers or anything, other than being very tall. His whole thing is that he's unnatural, which kind of means he doesn't work when made part of a type and part of a broader category of constructs. Frankenstein's monster just isn't as versatile as a vampire.

Perhaps, then, the reason that vampires work in D&D is that the supervillain aspect is already there? Dracula already has that mastermind aspect, and a castle is not un-dungeon-like, so he works as an adventure-story villain and perhaps brings that horror quality with him. But poor old Frankie, robbed of his subtext, is just a brute, which is OK, but it's not like fantasy games were short on brutes. You could mess around with the Monster to make it tactically interesting, but I don't know what you can do to make it thematically interesting.

Anyway, I don't know. I was just musing on the ways in which you can steal horror, mystery and crime drama elements for D&D games and they somehow work, even divorced from their original context. Broadly speaking, I think it might be a strength of the ripoff pastiche nature of a lot of games; you bring in a particular symbol and players are happy to assume a lot of the things that go with that symbol, even if those things don't make a whole lot of sense given your system or setting.

Speaking of horror, if you've read this far I should mention that my little Lovecraft-y Viking-y ebook "The Barest Branch" is on sale until the end of Halloween over at Drivethru. It's just £1.25 until the end of the sale. Check it out if that's your kind of thing.
Posted by James Holloway at 03:14