This past Sunday, pal Chris (of new steampunk fiction blog Dreadnaughts and Dragons) and I went to the annual SELWG wargames show at Crystal Palace National Sports Centre in London. And it was pretty good!

I got some stuff -- nothing too exciting if you're not me, I guess. I'm mainly on this SAGA kick right now, and I got some Conquest Games Norman knights, discount Foundry Vikings (£8 for 10 figures, which is pretty good, especially for Foundry) and a Norman church from Timeline Miniatures, which is going to be a little 11th-c church for my Anglo-Saxon setting. No double-arch windows, but it'll do. With its later medieval crenellated top, it will also be the village church in my Strange Aeons games. I will be doing a more detailed blog on building and painting this. And I can use the last of my Renedra gravestones to give it a little detachable cemetery.

I also picked up a few bargains at the Bring and Buy, including this:

And from another trader, I picked up a copy of the Havok starter set for £1. I only became aware of this game recently -- it was a little game with plastic figures and stat cards and stuff, and it was one of those early attempts (1996, I think?) to do a totally-integrated game, where each figure comes with the rules for it. Mainly I got it out of curiosity, and for the robots! It has big stompy robots.

And of course there were games to see and participate in. 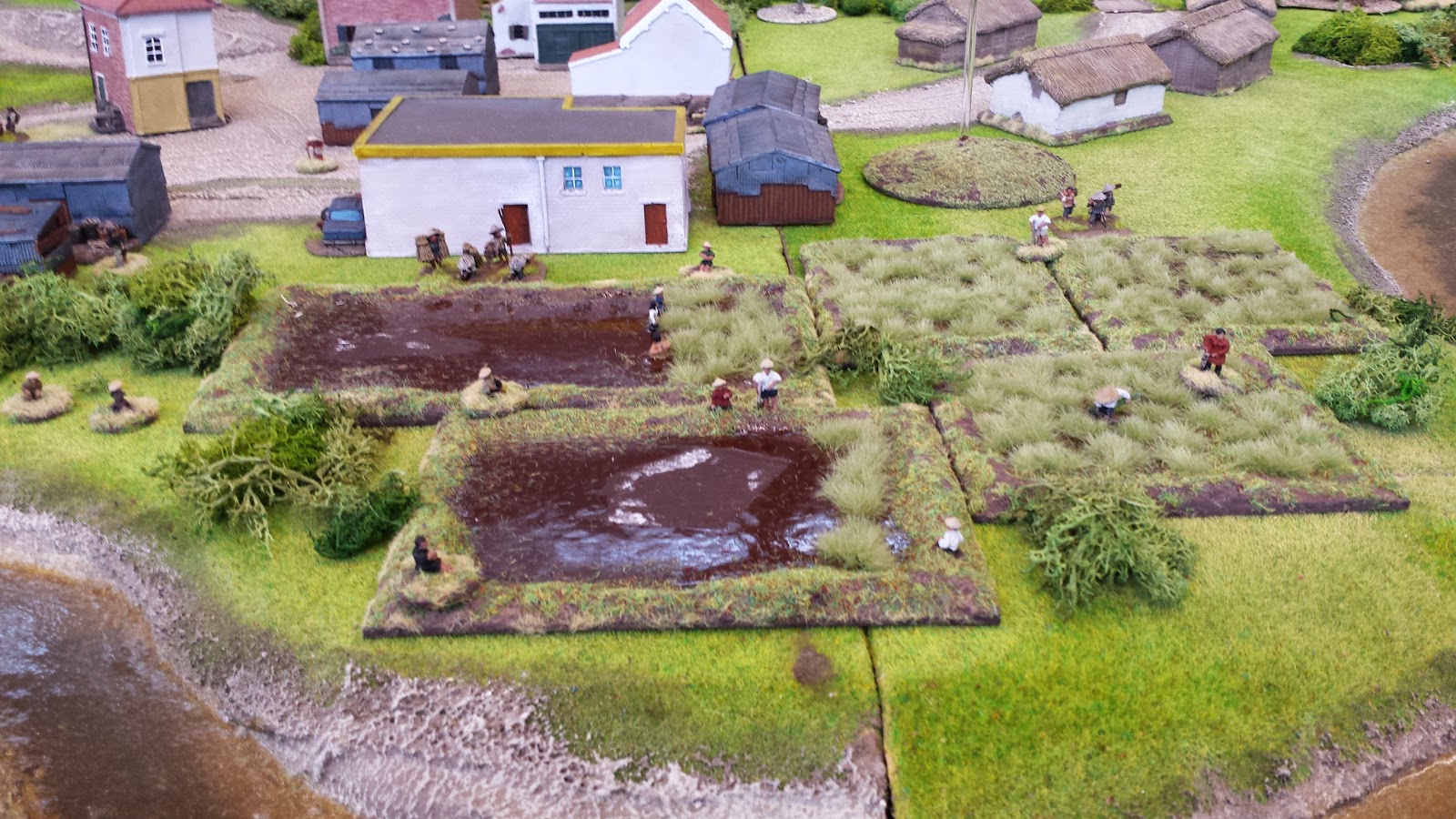 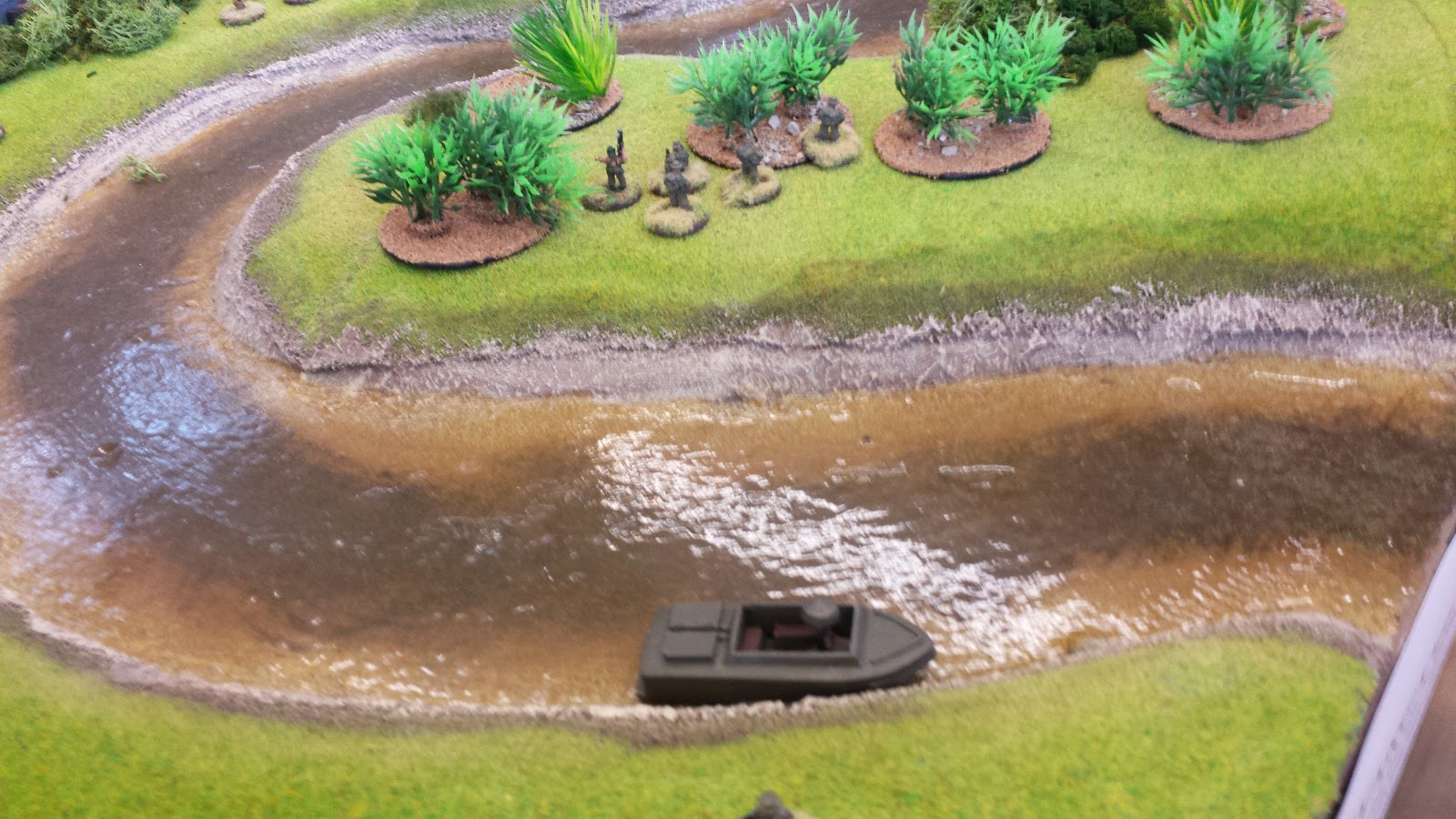 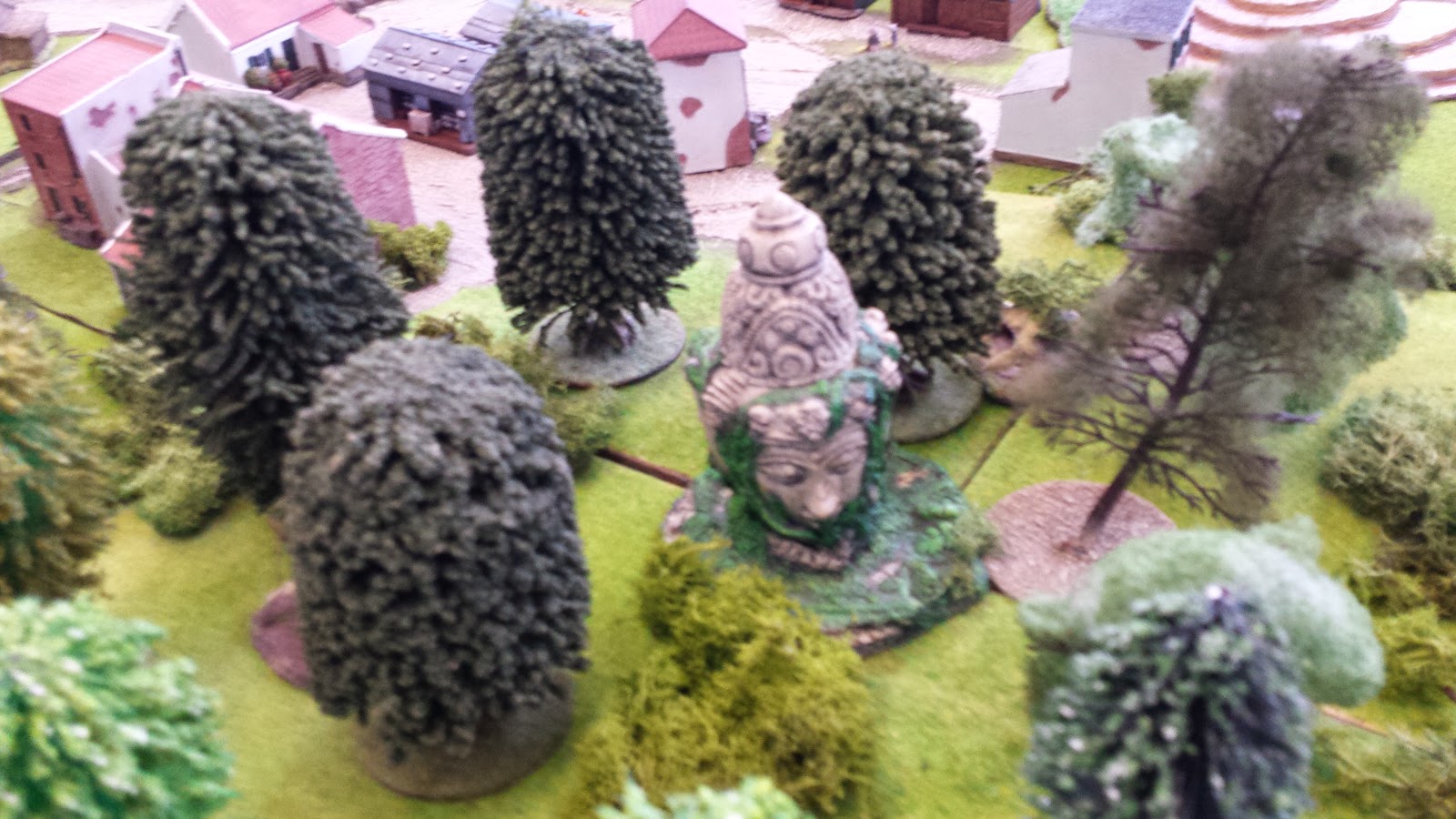 Deal Wargames Society presented this Vietnam game in (I think) 15mm. I think my favourite thing about it was the little touches, from black-suited CIA agents stopping a car to villagers working in rice paddies. There were also some nice aircraft models, giving the game a multi-level appeal. 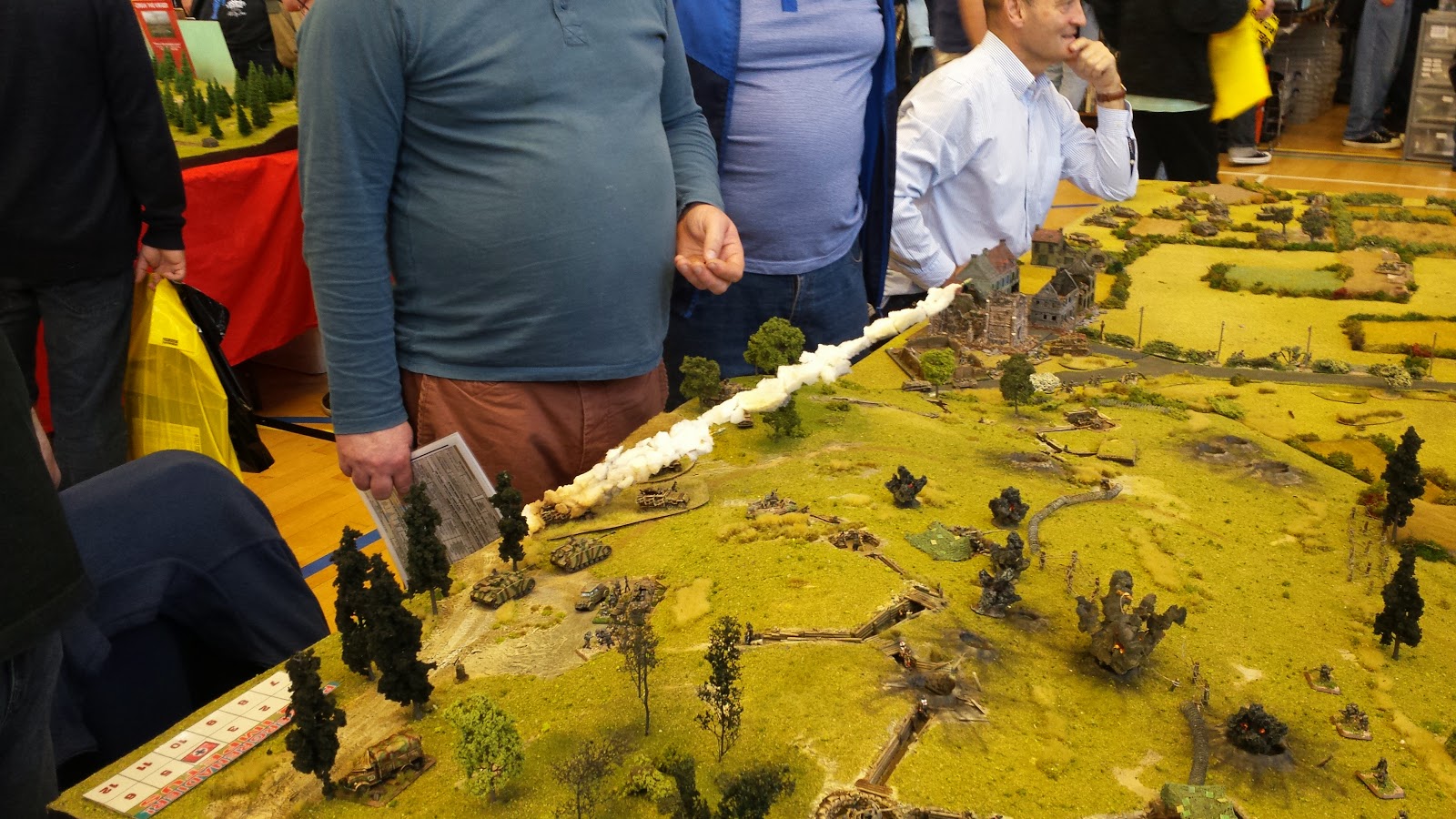 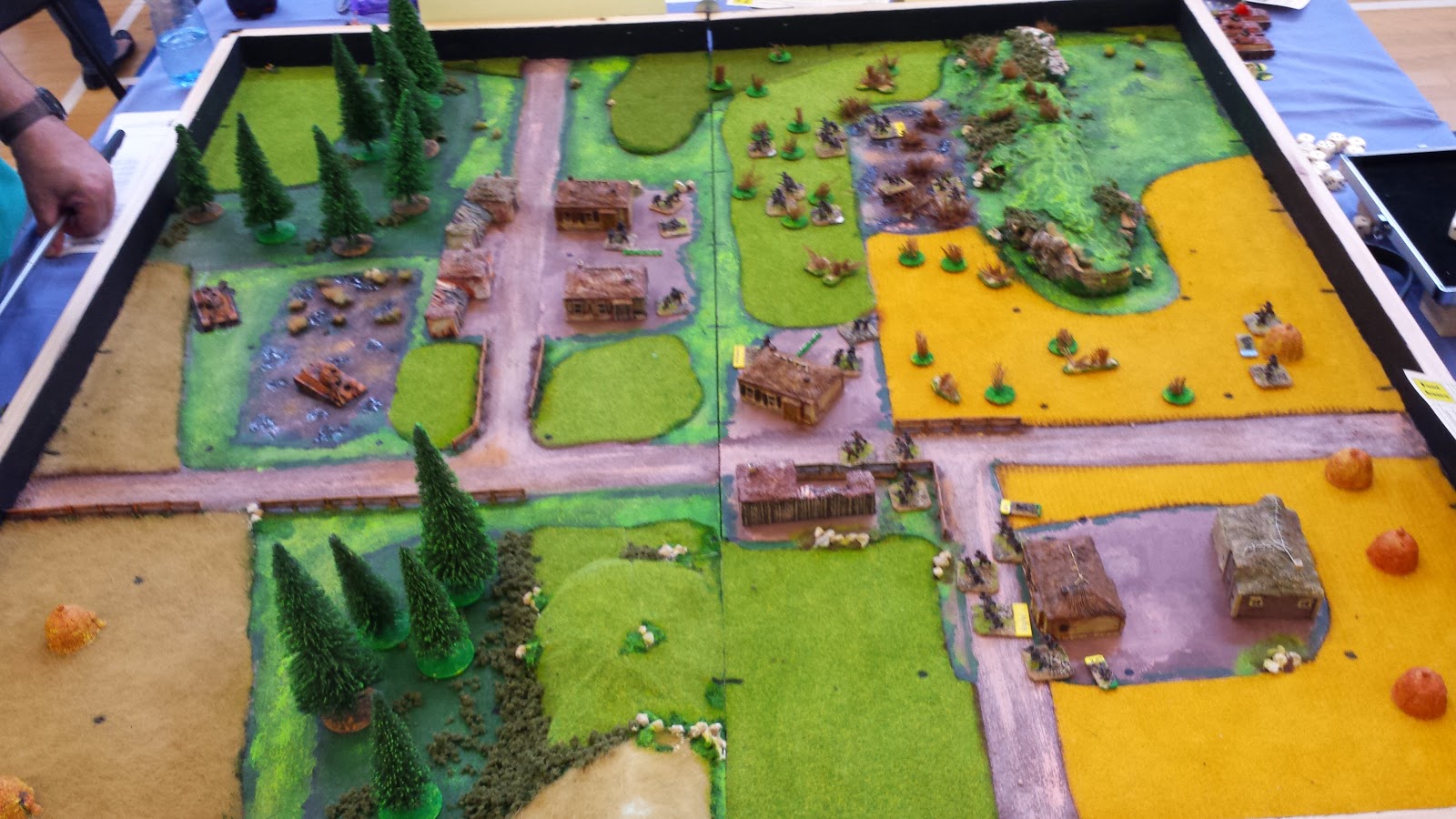 Peter Pig were running a demo game (PBI, I think?). The thing I really liked about it was that the roads, ground colours and even some of the small terrain features like walls and haystacks were painted or mounted on the inside of this collapsing table. The trees and buildings were then added separately. If you look at the middle, you can see that it's hinged, sort of like a wallpapering table if the folding edge were the long edge. I thought that was a pretty cool idea. 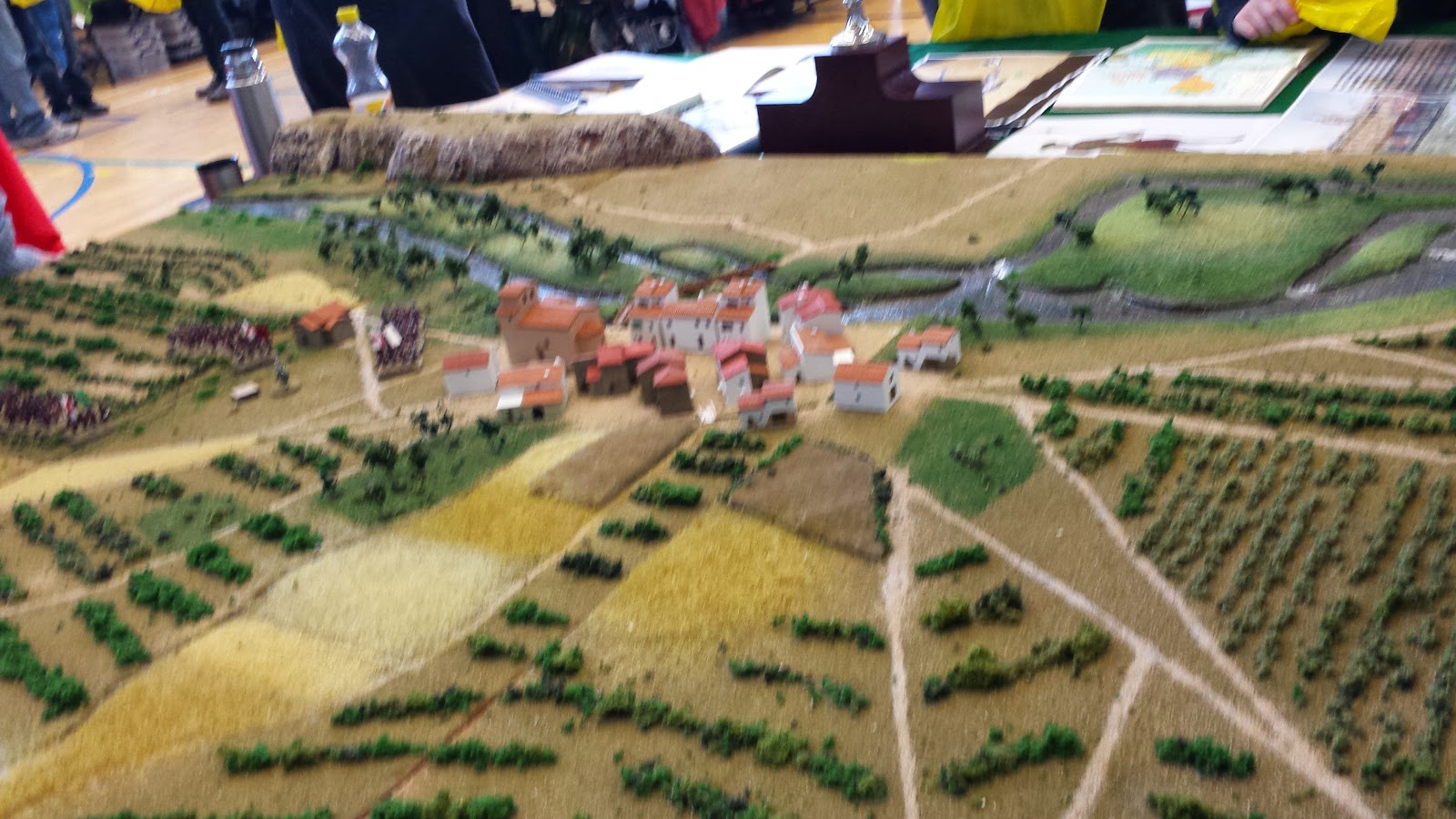 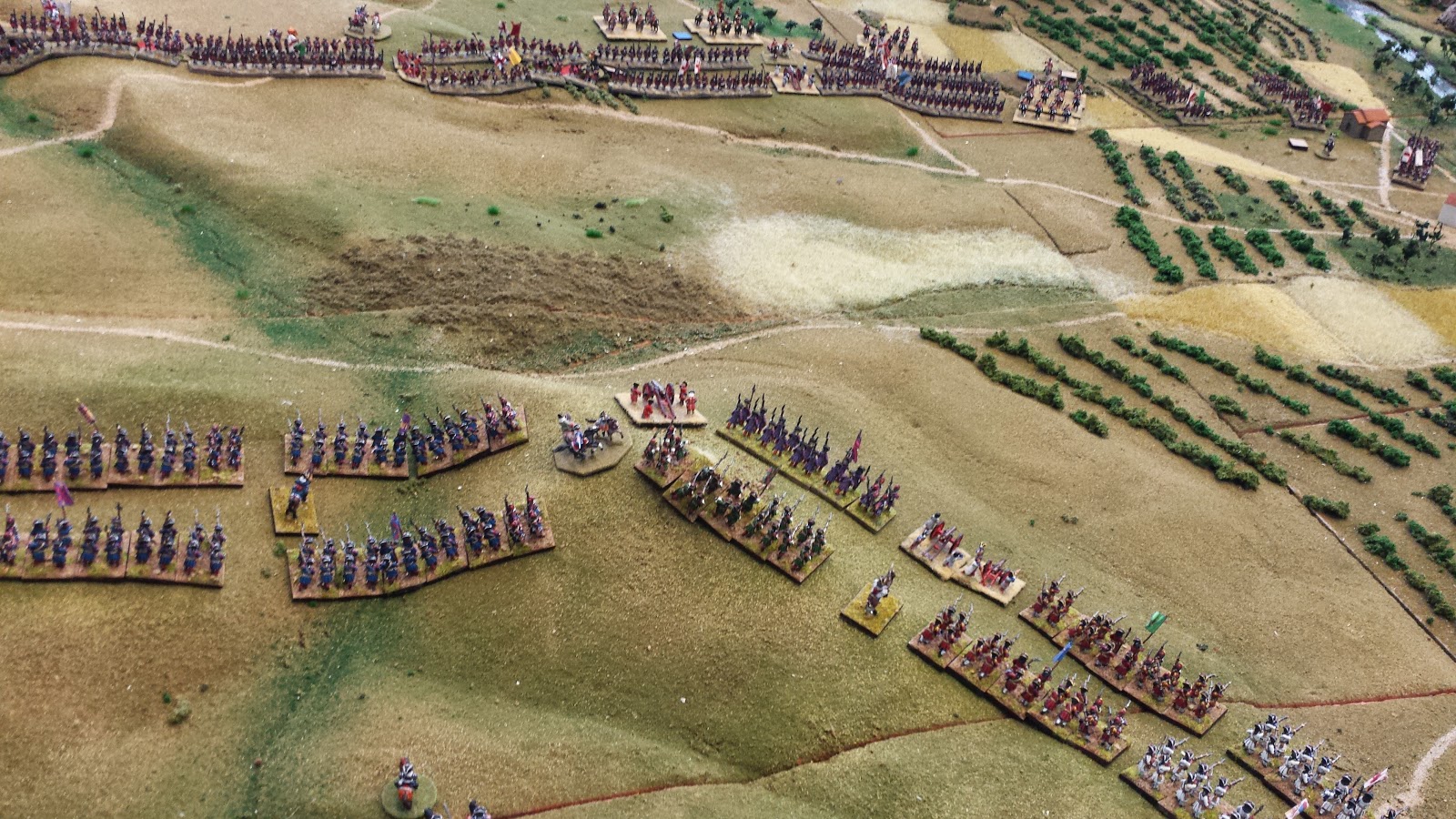 Southend Wargames Club did this "Talavera, but not as we know it" battle set in 1709. I really liked the fields, roads, and hills, which I felt were really lifelike. The makers informed me that they had actually chosen the terrain based on what was known to be planted in the fields around Talavera. That's more effort than I want to go to, but just varying the crops and patterns certainly makes the ground look very natural. 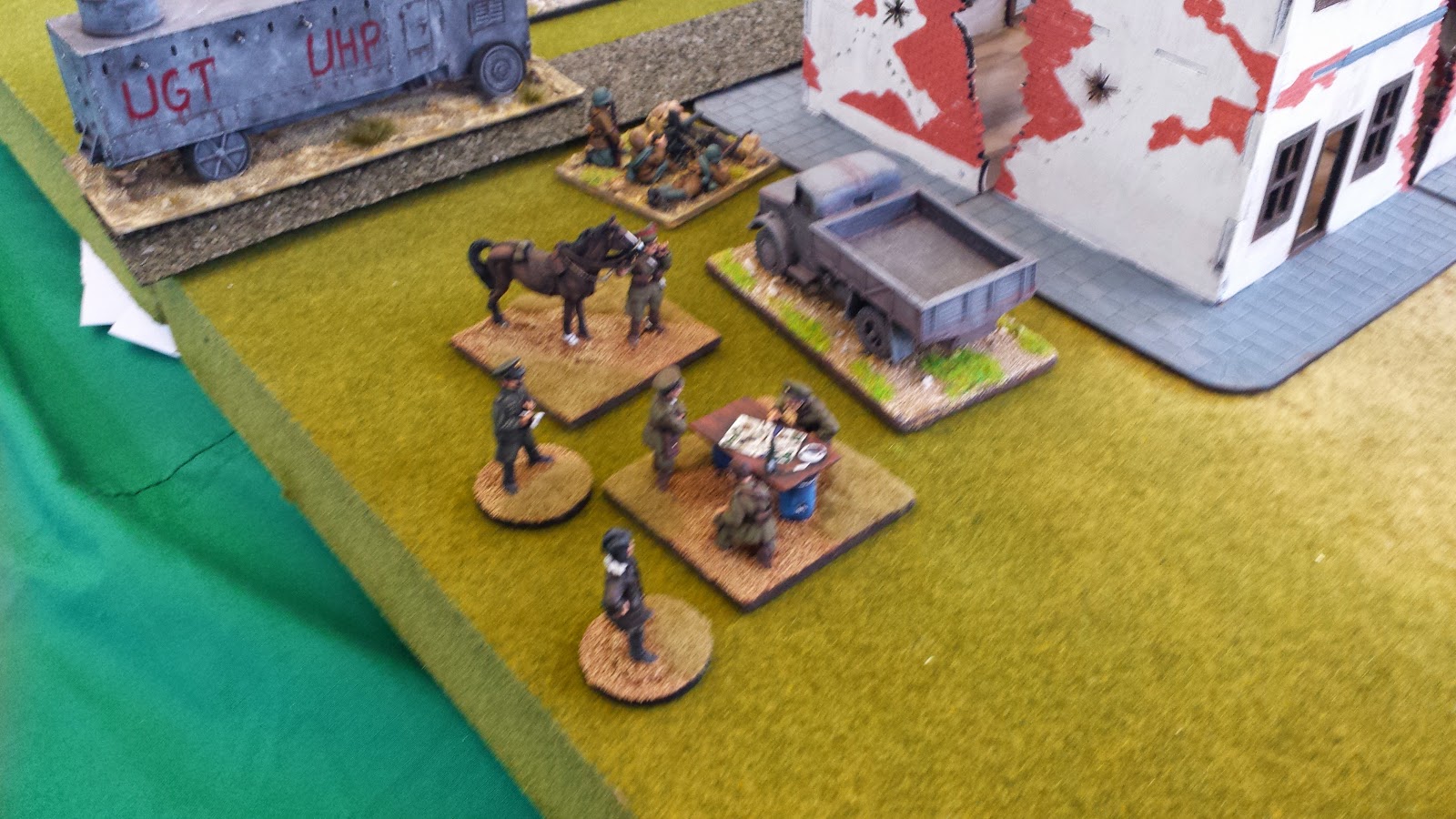 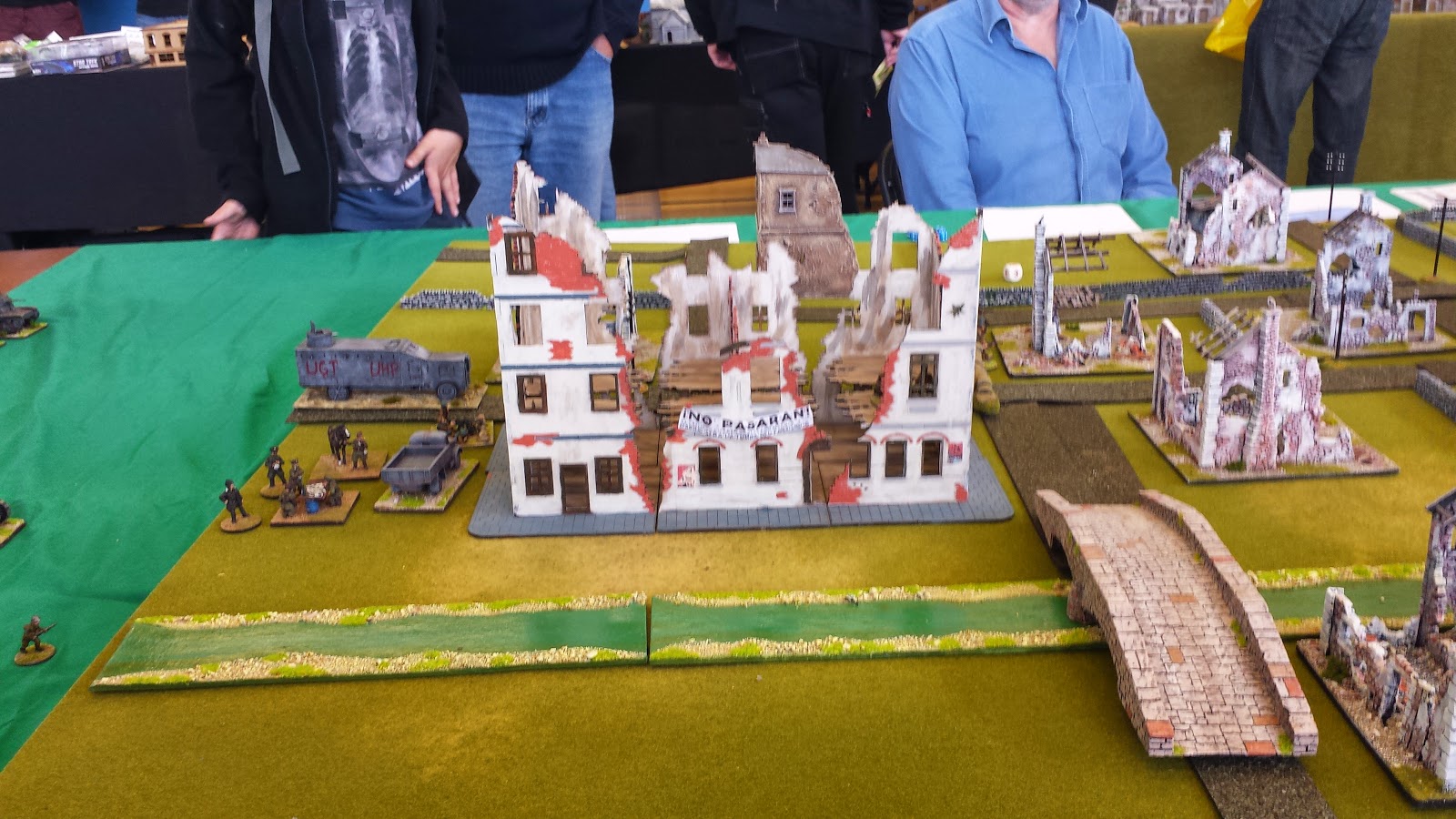 GLC wargames club put on this Siege of Madrid game, featuring lots of MDF terrain -- the lightness of this material means nice tall buildings at a reasonable cost, and it really works well for an era like this one, where you have rendered walls and tall buildings. The added banners give it period flavour. I liked the command vignette, complete with Soviet military advisers. 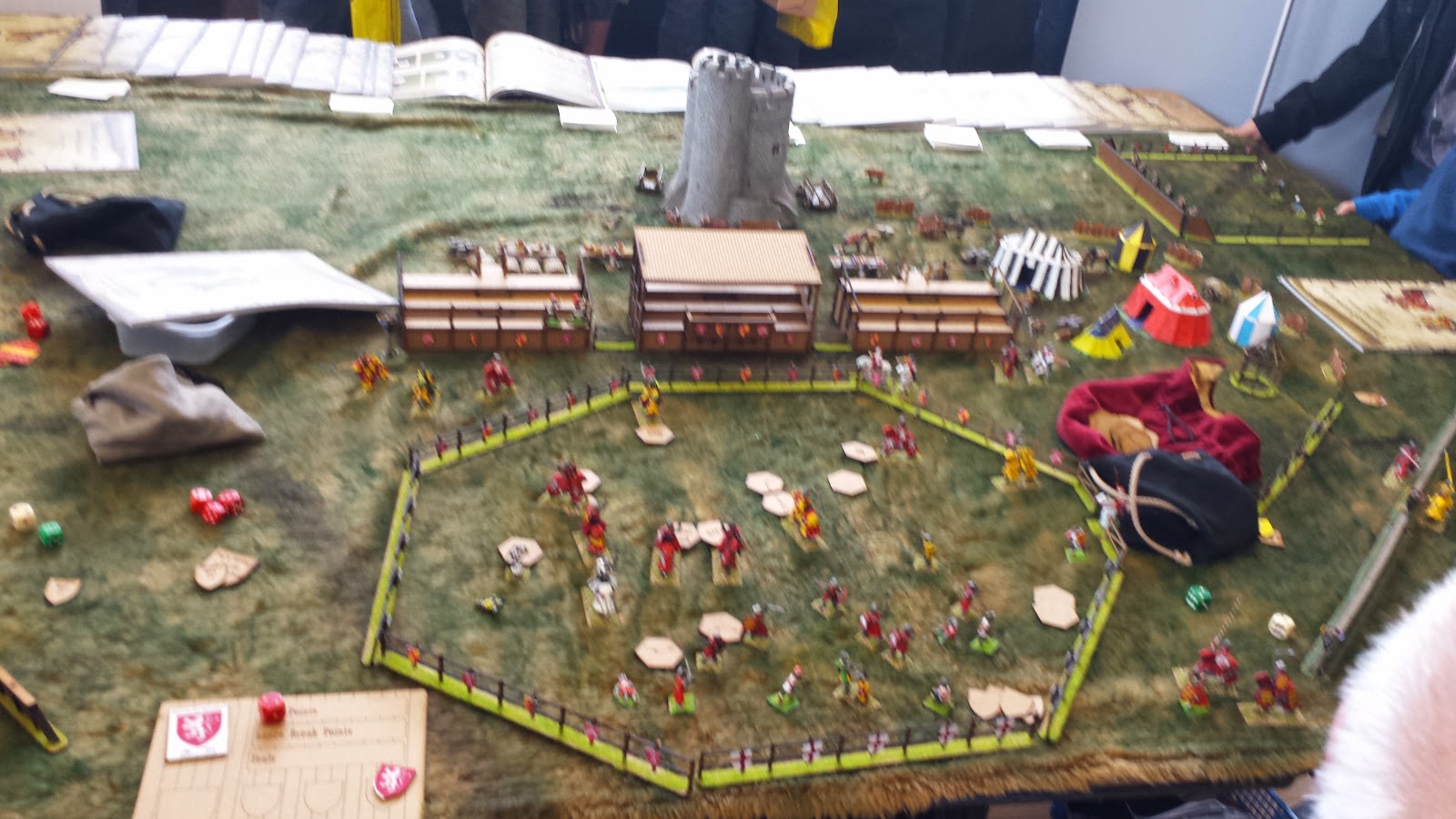 More MDF terrain on display in this participation tourney game of Crossed Lances. A big ring for the melee, lists, stands, archery butts ... it was pretty complete. We played a game of this. We also got to play in a chariot-racing game hosted by Crawley Wargames Club. Like all good participation games, there were hats:
This was a great little participation game, with much reckless driving, breathless anticipation of cards turning over and applause when a young player took the victory and was rewarded with a free figure.

I also picked up some free 15 mm sci-fi models from the Ground Zero Games stand, and Chris very generously gave me his. They will go into the 15 mm sci-fi pile, which is very definitely a project for next year, after the Vikings and the Normans and the 1/72 Romans and maybe some more Cthulhu stuff and then there will be the Reaper kickstarter arriving and and and ...

Overall, I didn't do too badly. My painting score took a pretty nasty hit, but nothing I can't fix in a couple of weeks. I bought things I wanted, but other than the Havok box, which was a one-quid impulse buy, I don't think I bought anything I won't use or at least read. I even had a few pounds left at the end to put back in my conscience-free go-ape-shit-at-conventions tin.
Posted by James Holloway at 02:19