As I may have previously mentioned once or twice, I am currently getting ready to move house. That means that many -- indeed, most -- of my books are packed up. Nothing daunted, I'm going to do another two-thing mashup post because my creativity is at a low ebb. Let's do it. 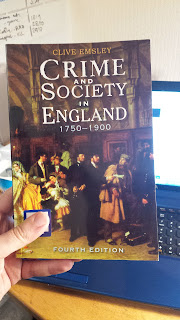 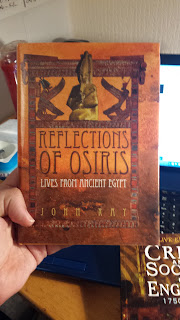 Opening these books to random pages, we find the following passages:

The term 'monkey-handler' is not to be taken literally, but is probably the late Eighteenth-Dynasty equivalent of 'shyster'. It goes without saying that the real handlers of monkeys can have done nothing to merit such an unjust reputation. There are other colourful expressions in this text, which Horemheb may well have picked up during his army career.

A promising start! Let's look at the next one:


In our District and Experience ... we find Riots and dangerous affrays among foreign seamen (many of whom continue on shore until they are destitute and then seek a support by plunder) the most prevalent offences and most difficult to be prevented. Discharged merchant seamen, their pockets bulging with pay, encouraged other forms of offences. 'Street robberies and particularly larceny from the person (chiefly committed on seafaring people)' appeared the most prevalent forms of crime in the Whitechapel district of Regency London ...

OK, so clearly what we have here is a dishonest monkey handler who has trained his monkey to pick the pockets of sailors on shore. That's all very well and good -- and it would be a fun ability to give a rogue, for that matter -- but let us, instead, agree with the spirit if not the letter of the first piece and assume that the monkey-handler is the victim here.

OK, so sailors are a shady bunch in general, right? The cult of Cthulhu had lots of sailor members and seems to have employed them as assassins, and that's leaving out all the purely mundane smugglers, pirates, drug-runners and fugitives you get among sailors in various eras.

So our monkey-handler sends his little pal to swipe something from a sailor, but instead of the usual embroidered handkerchief, scrimshaw keepsake or roll of coins he comes up with something sensitive, something that reveals an important upcoming rite of the cult of Cthulhu. When the terrified swabby realises he's lost something incriminating, he immediately puts two and two together, and he and his buddies (maybe not even cultists, just outraged shipmates) hunt the otherwise-harmless rogue through the streets of Port Said with big knives. So when a frantic monkey comes running into the tea-house where the PCs are planning their next excavation ...

Easy-peasy, although it works a little better if your PCs have an inherent reason to care if a monkey handler gets knifed up. It's not hard to introduce the monkey guy in advance, though, because after all a monkey handler is a fun street-contact NPC in any fantasy or historical setting. Heck, you could even do it in Vampire and make any player who spent points on Animalism eternally grateful.