So at this year's Oldhammer weekend I cavorted shamelessly among the bag of miscast models provided by the generous Curtis Fell of Ramshackle Games. I picked up lots of stuff to use as the base of various projects, and here are a few I've begun work on!

This little guy is a cool model, but he was missing a foot and a head: 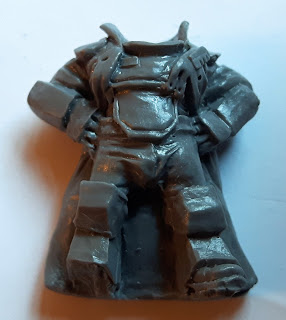 Anyway, I cleaned him up a bit, then added a boot crudely sculpted from green stuff and a spare head from the old Wargames Factory shock troopers box. I am not much of a sculptor, as you know, but I think this foot looks pretty OK. 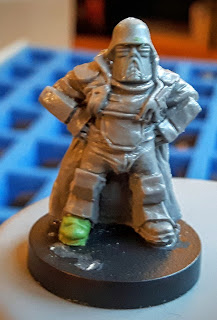 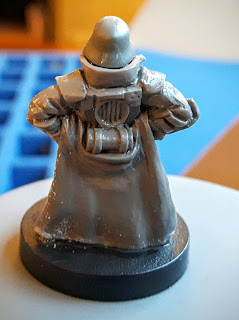 Overall I'm pretty pleased with him! I will texture his base, paint him up and add him to my generic trench-coated space bad guy force.

The next one is a Frankenstein's monster made of various Ramshackle and other bits. He will end up in my Ork army, with the idea that he's had maybe one too many cybernetic replacements. 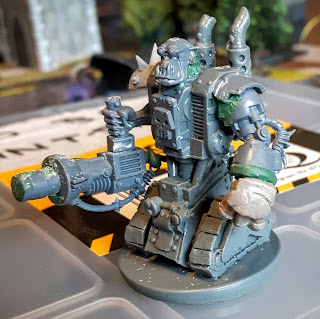 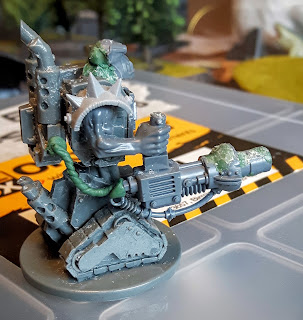 The main parts of this model, the treads and torso, come from some Ramshackle robots, which, coincidentally are on sale right now for cheaps! He also includes bits from an Ork Stompa, a vehicle crewman, the Ork Boyz kit, a Space Wolf terminator and a Ramshackle Gorillagon. I am pretty pleased with him, although he still needs quite a bit of work.
Posted by James Holloway at 01:39

Email ThisBlogThis!Share to TwitterShare to FacebookShare to Pinterest
Labels: miniatures