So I went by ExiliCon 2016 this past weekend, and while it was quiet (as I expected it to be) I thought it went pretty well. I got a good turnout for my talk, which should be online before long, and I got to play and buy some games, including some older WHFB stuff I had persuaded myself I was looking for and a copy of Grant Howitt's RPG Goblin Quest, which I also had a great time playing. You can buy it on DTRPG or on Itch.io if that sounds like your thing. Here's a photo of me playing it, with some of my character illustrations: 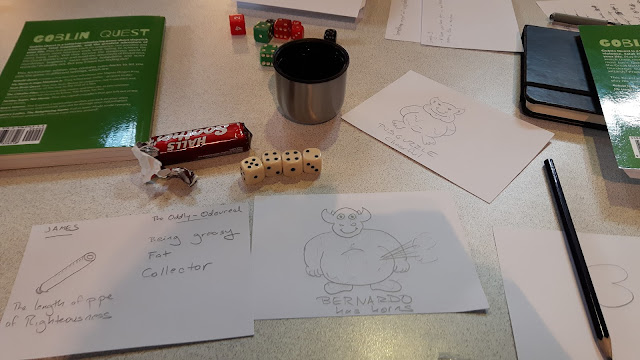 I didn't take photos like I did last year, except for one of my game set up for playtest. But because of my talk schedule I didn't actually get the chance to run a game! Oh well.

Anyway, I felt, as always, like I learned a lot from the con, and hopefully you'll see some of the lessons learned here on this blog over the next year.
Posted by James Holloway at 01:00