I've been to the zoo again, which means it's time for more cheap monsters from the zoo gift shop!

These plastic jellyfish are 40p each or 10 for £3.50 in the gift shop. Mount 'em on a length of floral wire, base them on a coin, cover the wire up with some foliage, and Bob's your uncle.

I think they'll look great as juveniles of the larger floating space jellyfish critter I made from an ornament I found in a charity shop nearly a year ago. 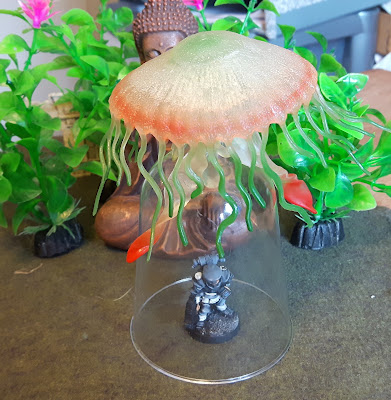 Anyway, here's a writeup of these monsters for Rogue Trader, the first edition of Warhammer 40,000.

This lighter-than-air species is indigenous to Peterson's World. Typically found in schools of 1-2 adults and 2-6 juveniles, they drift across the landscape, paralysing prey with their stinging tentacles and consuming them. The gas that fills their lift sacs is highly combustible; ranchers and mine companies have encountered difficulties when stingpods collide with electrified fences or other energy barriers.

On its first round of hand-to-hand combat, the stingpod attacks with its tentacles, attempting to incapacitate its prey. If successful, it will bite in subsequent rounds unless attacked by another opponent and driven off.

The lashing impact of a stingpod's tentacles inflicts no lasting harm, but causes overwhelming agony that can temporarily paralyse the victim. Each creature hit by a stingpod's tendrils must make a Cl test or be paralysed. It may test at the beginning of each of its turns to recover.

When a stingpod is killed, there is a chance that its lift sac ruptures and combustible gas is released. Roll a d6: on a 6, the creature explodes like a grenade with S4, D1, -1 save, 1.5" radius. If the stingpod was killed with a las, auto, shuriken, bolt, power, or other similar weapon, it explodes on a 4+ . If it was killed with a flame, plasma, or melta weapon, it explodes automatically.
Posted by James Holloway at 02:48