(This is just one of several pages of monsters for the Monster Man contest. To see the rest of the entries, click here!)


by Goblin’s Henchman
Bone-Butcher
The Bone-Butcher (also known as the Bone-Bane and the Clerics’ Bane) in its ‘grub’ stage is a silver wire-thin parasite, which is about an inch long. Its preferred host is humans followed by humanoids. In its adult stage, the parasite is often mistaken for an undead creature (which it is not).
Grub stage - At this stage in its life cycle the parasite has 1 HP, AC of 4 (because it is small and fast moving), and is unintelligent.
The Bone-Butcher grub tends to lurk in places where curious fingers find themselves, e.g. jewelry boxes, lock mechanisms or even items like a broken clock. The grub lies in wait, coiled up, and springs at its victims. The grub moves along the ground (and walls) at surprising speeds and readily slips between gaps in armor.
Stages of infection - Within seconds of attaching to the victim’s skin, the head of the grub detaches and stealthily bores towards the victim's bones. The body portion of the grub remains attached to the victim’s skin and acts as a visual decoy, sucking blood like a silver leech for 3 rounds before dropping off (1 HP of damage per round).
When inside the host's body, the Bone-Butcher steadily and stealthily grows, forming a wire cage-like structure around the victim's bones. There are four stages of growth before the Bone-Butcher becomes a fully mature adult, these stages are:
Stage 1 - the victim gains +1 STR (if they have 18 STR, then they gain +D20% to their 18/xx STR, even if they are not a fighter); because the parasite is growing into and reinforcing the connective tissue of the victim;
Stage 2 - the victim gains +1 DEX (if they have 18 DEX, then instead they gain a further STR bonus as outlined in the first stage); because the parasite stimulates the growth of new nerve connections and taps into the victim's brain; the victim becomes unusually attracted to small metal objects;
Stage 3 - one of the gained bonuses listed in the two stages above is lost (as the parasite begins to take over the victim's body);
Stage 4 - the other bonus is lost, for the same reason.
The DM decides how long each of the above incubation stages last. Anything from a few days to a week per stage would fit in with most games/campaigns.
Adult stage – Each week after Stage 4, there is a 10% cumulative chance that the parasite will be fully mature. When fully mature, the parasite literally walks the victim's skeleton out of the victim’s flesh popsicle. 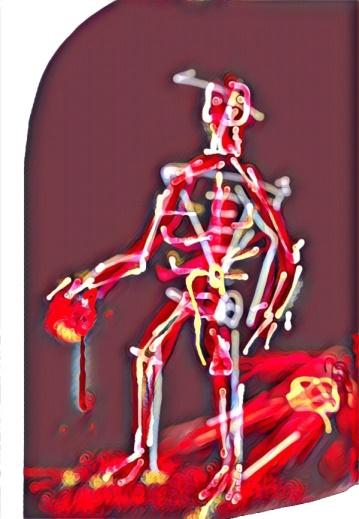 That is, in one swift movement the cage-like structure (i.e. formed around the victim’s bones) moves, neatly slicing the victim's soft tissues away from their bones, acting somewhat like a three-dimensional cheese slicer. The victim’s external tissue sloths off their bones, falling away like a bag of wet meat. What remains standing resembles an undead being, i.e. bones and sinew being held together by a network of silver-ish (blood covered) wires. Many of the victim’s internal organs (like the brain) remain trapped within the boney exoskeleton, and will begin to rot.
When this ‘butchering’ of the victim occurs, there is no saving throw; it is instantaneous and non-reversible death. Therefore seeking a cure before this happens is imperative.
In the adult form the Bone-Butcher is highly intelligent; the network of wires is in fact a multicellular neural net capable of higher thought. The Bone-butcher can make use of the victim's knowledge and memories, but cannot make use of the host’s former abilities (e.g. no spell casting). It can speak crude words if the victim’s internal organs have not fully rotted away.
Propagation stage - The skeletal-like creature wanders, seeking to propagate its species. When the adult Bone-Butcher finds a promising location, the parasitic network splits up into hundreds of inch long infective 'grubs', each grub in search of a fresh victim. All that is left behind is a pile of grisly notched bones. A few of the grubs will always remain with the bones.
Combat - If encountered in the skeletal (i.e. adult) manifestation, the creature fights as if it were a ghast (Monster Manual I, page 43), having two claw and one bite attack.
Each time the skeletal form is hit with a blunt weapon it will shed a number of inch long grubs equal to the number of HPs of damage done. For an edged weapon, just one parasite is dislodged per hit. Of course, the dislodged parasites will seek to infect any nearby human/humanoids.
Special abilities – The adult Bone-Butcher shares the same special abilities and weaknesses of a ghast (i.e. gives off a 10’ radius stench (due to trapped rotting organs), failing a poison saving roll leads to a -2 to hit it due to nausea; they are immune to sleep and charm spells; but cold iron does double damage to them). The Bone-Butcher does not have the paralysation touch of a ghast and cannot be turned (because it is not undead, it just looks undead).
Cure - The parasitic infection during Stages 1 to 4 above can be cured by most normal curing spells (e.g. cure disease), but spells that restore only hit points are not effective at curing this infection. Some rare herbs known to druids can be curative. Indeed, druids are sensitive to this abomination of nature. Druids have a 25% chance, with +2% per level, of having an uneasy sensation when in the presence of an infected person. The druid’s bones may even appear to itch. If a druid is infected by this parasite, there is a further +50% chance that the druid will sense that something is wrong with themselves.
Killing the infected victim will also kill the parasite, a crude but effective remedy.
Cure bonus - If a victim is cured during Stages 1 to 3, there is a once in a lifetime 25% chance that one of the gained STR/DEX bonuses will be retained permanently. 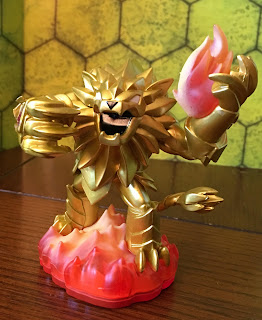 Brass lions are natives of the fire elemental plane, where they form the bulk of the guards of the City of Brass.  They appear to be animated, flowing bronze statues of leonine humanoids, some 10' in height.  Their eyes are smoldering orbs and flames burst from their joints as they move.

They may throw an orb of flame up to 6" that explodes as a 1" radius fireball for 6d6 damage.  This can be done every d6 rounds.  Their metallic claws and teeth inflict devastating damage.  On a to-hit roll of 20 their bite rends, degrading the defender's armor by one point.

Brass lions have fully formed hands and can use weapons, but rarely do so.
A brass lion that has served well and faithfully in its guard duty will be granted a sabbatical of d6 years every century during which it can pursue its own interests and goals. 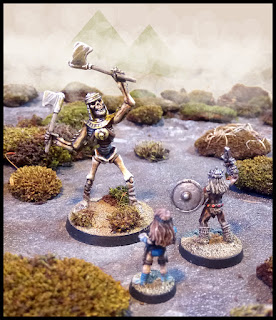 Crypt guardians are magically animated remains of the dead, set to protect burial sites of important figures. Often the ancient Egmetians set them to defend their Unfairo's dodecahedron tombs. The favoured skeletal remains of the ancient sorcerer-kings were giants. Imposing in size these monsters cause mortals to quail in terror. 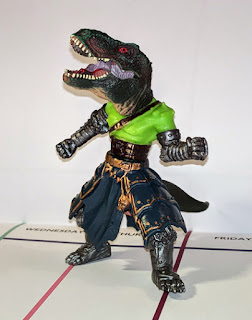 Aggressive. As a bonus action, the orc can move up to its speed toward a hostile creature that it can see.

Multiattack. The tyrannosaurus makes two attacks: one with its bite OR greataxe, and one with its tail. It can't make both attacks against the same target.
Greataxe. Melee Weapon Attack: +5 to hit (+10 if target grappled in bite), reach 5 ft., one target. Hit: 9 (1d12 + 3) slashing damage.

Bite. Melee Weapon Attack: +10 to hit, reach 10 ft., one target. Hit: 33 (4d12 + 7) piercing damage. If the target is a Medium or smaller creature, it is grappled (escape DC 17). Until this grapple ends, the target is grappled, and the tyrannosaurus can't bite another target. 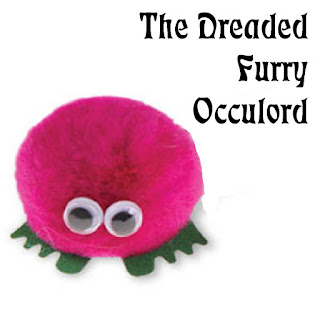 The friendly looking Furry Occulord dwells in caves and other dark places waiting for the curious and incautious to approach it.

When first encountered the Furry Occulord will look up at the adventurers with big, sad eyes and make cute but hypnotic noises. Everyone present capable of seeing and hearing the Furry Occulord must Save vs Spells or be unable to resist petting it's fur. If this is not the first Furry Occulord they have encountered they receive a +2 bonus to the saving throw. On touching the Furry Occulord the unfortunate victim will discover that the creature is in fact covered in thousands of very fine spines containing a paralysing venom - the victim must Save vs Paralysis or be paralysed for 1d6 game turns. If all of its foes become paralysed the creature will then begin to feed. Otherwise it will begin to screech very loudly - the DM should check for wandering monsters each combat round until something turns up.

Attacking the Furry Occulord is a difficult proposition. Its relatively small body is well concealed within the furry poison spines. Attacks must be made with polearms or the attacker must be completely protected by leather or plate, otherwise they must Save vs Paralysis every time they attack.