Some years ago, I responded to an ad on Freecycle offering a bunch of "Warhammer figures." They turned out to be mainly GW Lord of the Rings figs in a big old Quality Street tin. I was pleased enough; I repurposed some Wargs as generic fantasy critters, painted up the terrain, traded or gave away most of the rest and was pleased. Right at the bottom of the box was ... well, I thought it was one of the old fantasy buildings that came with the 4th edition Warhammer Fantasy Battle boxed set. But it isn't! It resembles, but is not quite the same as, the watchtower from the old Warhammer Townscape; however, this one has an arched front door rather than the square one found in Townscape and the 4th ed box. So I have no idea. Anyway, it was pretty beat up, so I threw it in a drawer and forgot about it.

The other day I was having a bit of a terrain clearout (which is also how those brick walls got painted) and I decided to finish it off. So I bashed together a new roof out of a bit of scrap card and some coffee stirrers, stuck it on a piece of scrap foamboard that had been sitting in the shed for over a year and stuck some flock on. 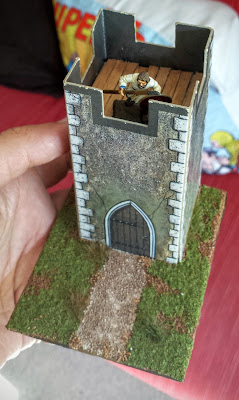 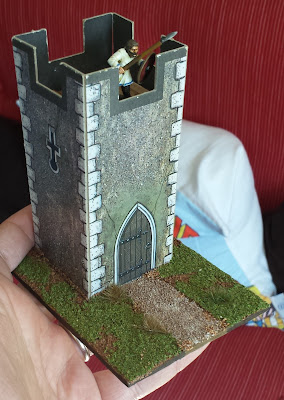 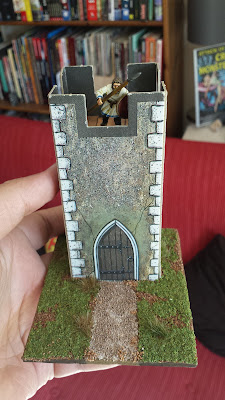 Not the most realistic or detailed piece of terrain ever, but for a total cost of, oh ... £0 ... it'll do. It looks like something I would have failed to produce in my young days.

The grey border thing was supposed to be cut off, but the tower was already stuck together. I'll maybe do it at a later time; it would help with the messy edge. On the other hand, I'm constitutionally disinclined to go back to a finished piece at the best of times, let alone when I've got a crapload of other stuff on.

"Good enough" is a vital concept for the frugal gamer.