A joint project: Age of Sigmar

It's not that I play Age of Sigmar. I've never even really thought about it. But scheduled painting projects help clear the ol' backlog, and I do like that idea. With that in mind, Tim of The Responsible One's Wargaming Blog and I are starting a joint project. We're each going to paint 1,000 points of Age of Sigmar forces over the next five months with the goal of creating little armies for a game in the new year.

I don't intend to use actual Age of Sigmar models, unless some fall from the sky onto me, because I am not made of money. Instead, I'll be using whatever I've got lying around plus whatever I happen to come across in the next few months. There's oldhammer metal in there, Reaper Bones, historical plastics, whatever.

If this sounds like fun to you, why not join in? The idea is that by posting frequently, we encourage each other to stay on schedule and even create a little shared mythology for the characters. I should probably be focusing on the painting I need to do for next week, but you know how it is -- I'm already thinking of stuff for this project instead.

Anyway, here are some of the models that are going to wind up incorporated into my budget vanguard. Starting a project box is always fun! 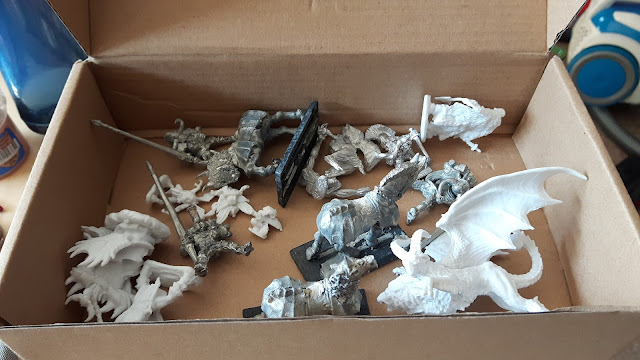 I'm not including the sprues from Sprue Hell that are going to contribute to the Marauder ranks, of course.