I needed some muscle for the baddies in my D&D game, and I didn't have much time; I was dreaming up this scenario while on holiday in Italy. As soon as I came home, I rummaged through the Box o' Bones to find some guys who might do the trick. I wanted some burly dudes in evil-looking armour, and here's what I had lying around: 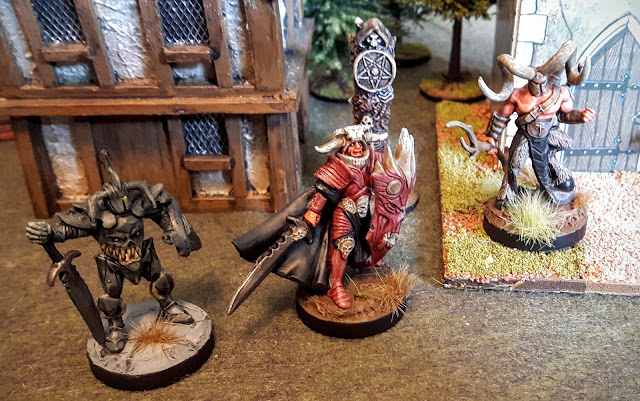 These guys are from the Reaper Bones II Kickstarter; I painted them in my usual speed method, priming them grey, highlighting up to white and applying colour with washes. Torso-face guy was easy (he's just that method with a 50/50 black and green wash all over his body and some contrasting areas picked out) but the one I'm really happy with is the guy in the centre, whose evil flesh-armour looks pretty good. It's a layer of GW Carroburg Crimson followed by a 50/50 mix of Carroburg Crimson and good old Tamiya Clear Red. The bony areas are Army Painter Soft Tone highlighted up with VMC Ivory.

These knock-off Chaos Warriors look a bit sloppy but I think they're all right for rush paintjobs on one-off baddies. If I were going to go into more detail I'd define the edges of the armour panels more clearly, maybe add some metal scuffs and wear, stuff like that. But to be honest I don't feel like most of the Bones models reward that level of investment for me; cleaning them up is such a nuisance. They really shine in situations like this one: I would never have bought these models, but I got them super cheap and when I needed some evil-looking dudes, I just pulled them out and gave them a super-quick paint job. I'm pretty pleased. 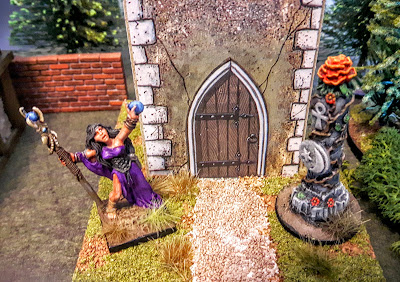 Plus I mashed out this quick sorceress -- also from that Bones Kickstarter -- while I was at it. I think she looks OK, although this photo could be better. She might turn up in Frostgrave or other games.
Posted by James Holloway at 23:57