In addition to working on The Magonium Mine Murders, I've also been contemplating doing something with my whole frugal gaming miniatures-from-toys habit. As I mentioned in my last post, there are three principles: substitution, inspiration and modification. Today I want to talk about the first two, which aren't all that different from each other.

When I talk about finding inspiration in toys, a lot of people are surprised: I get a lot of "where do you find all this stuff?" And the answer is that I do have a slight advantage, in that work takes me all over town and it's not hard to just poke my head into charity shops or The Works or Poundland or whatever. I also used to live just up the road from a big car boot sale, so there was that. But really, you just have to kind of remain passively alert to what's out there.

Giant animals are an obvious example of substitution figures. Indeed, I assume one of the reasons there are so many giant deer or whatever in D&D is that it was easy to just get some plastic toy animals and stick 'em on the table. If they're a little out of scale, well, they must be giant wolves.

You can take these to extremes, as with these caterpillars I got from a zoo gift shop: 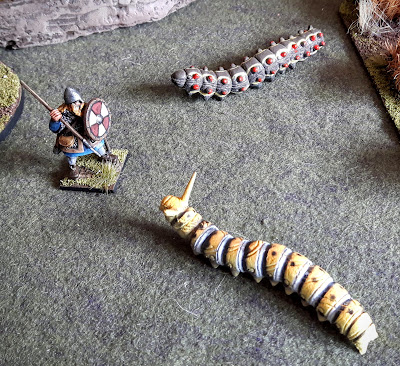 These are pretty good frugal monsters: cheap, visually distinctive, and full of resonance for people. In a sense that's substitution, because I'm sure there are giant caterpillars in the game setting somewhere. But it's more like inspiration, because it's the model that gives rise to the monster by making you think about its visual element. Caterpillars are cute but also weird, and you can see what sort of role they might play in a game setting. If they eat organic detritus, where do you get that much? They can crawl on walls and ceilings, which makes them fun dungeon inhabitants. They're not very fast and probably not aggressive, so they can be a hazard rather than a fight. And, of course, what sort of butterflies do they turn into?

When I saw the caterpillars, I immediately thought about what they'd look like on the tabletop. They were cheap -- something like 25p each -- and they were fun and colourful. Then I started to think about how they would work. They'd likely be a monster mainly intended to creep out or confuse the players, which is a monster type that really benefits from some kind of visual representation.

There are monsters that don't -- for all that skeleton models are easy and fun to paint, for instance, everyone knows what one looks like. So unless you see a bunch of skellingtons super cheap, it's not really worth going out of your way for them, or orcs or whatever. But weird monsters are a different story.