If you've played Warhammer 40,000 or one of its derivatives, you probably know who Ghazghkull Mag Uruk Thraka is. He's the Orkiest Ork of them all, a big tough dude with a metal skull and a humorous sidekick. He's appeared in various iterations of the game in various forms, getting bigger and tougher with every incarnation. Here's the first Ghazghkull model I encountered: 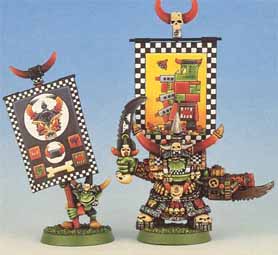 This guy still remains the definitive Ghazghkull in my mind, even though (or perhaps because) the current one is much larger and less Adams-y. 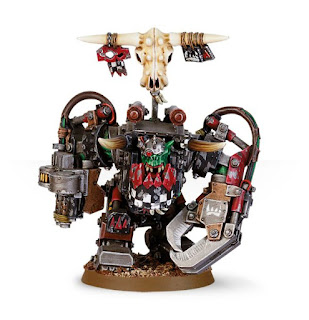 Still got the metal skull, though.

Ghazghkull has the controversial distinction of being, together with his nemesis Commissar Yarrick, one of the first special characters ever created for Warhammer 40,000 -- that is, one of the first character models to have unique rules rather than simply being an example of his type. For instance, Marneus Calgar's stats were published in a much earlier White Dwarf, but he's just a Space Marine officer who's had his arms ripped off and replaced them, as one does, with power fists bristling with Jokaero digital weapons. Original Marneus is an example of what a Space Marine commander is like. Ghazghkull is Ghazghkull.

But, interestingly, Ghazghkull started life as just that. Let's take a look at his first appearance.

Ghazghkull's first appearance was in White Dwarf 134, where he was the leader of Andy Chambers' Goff Ork army. In the article, Chambers talks about creating the character's steel skull and psychic abilities by rolling randomly on the tables in the then-forthcoming Ork book 'Ere We Go. 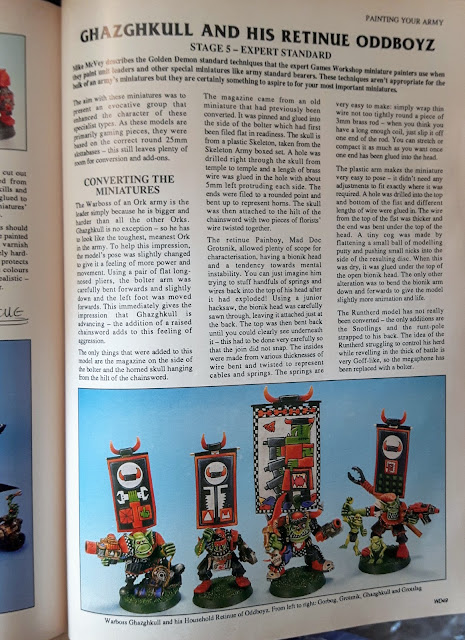 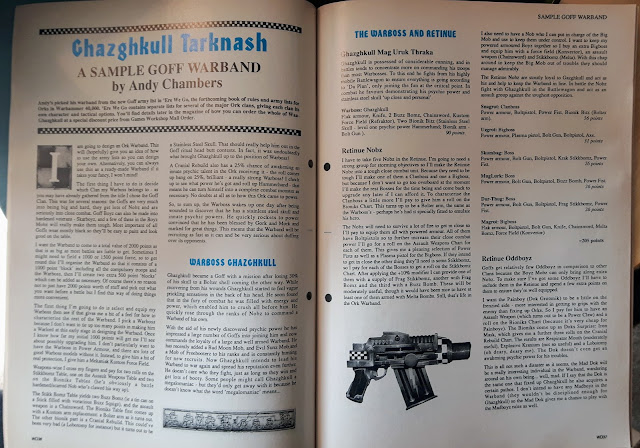 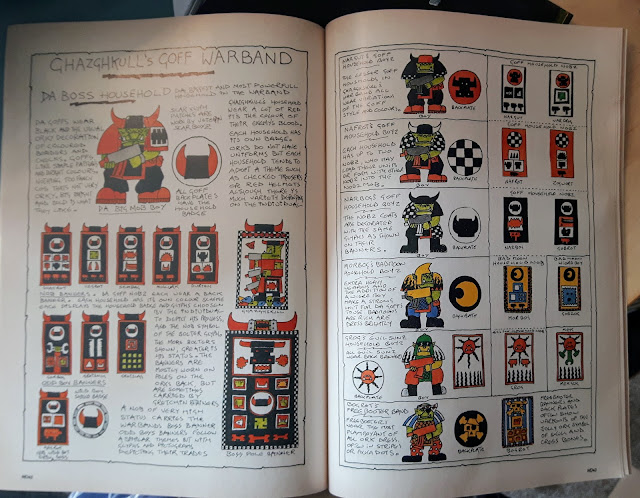 So original Ghazghkull was just like Marneus Calgar -- an example of what kind of character you could create to lead your armies. Then, like so many designers of games, the people who made 40K stuck their own characters into the narrative for funsies.

Over the years, though, the 40K universe has become very focused on these characters. I don't just mean in game terms -- by high 2nd edition, that ship had already sailed. I mean that, largely because of the success of the Horus Heresy novels, people are very invested in the personalities and fates of the various characters of the franchise. And, of course, these characters have models and appear in the game. For many people, the idea that "my guy" could be as important as Fabius Bile or whoever is bizarrely alien.

And I think that's a bit of a shame. Andy Chambers seems like a very cool guy, and Ghazghkull is a fun character. But he's Andy's guy, and Badlug is my guy, and I'm fond of Badlug, dim-witted, status-obsessed narcissist though he may be.

I often refer to this as the Owlbear Problem. If you know about the history of D&D, you know that Gary Gygax created the owlbear, and other monsters, by repurposing cheap plastic dinosaur toys. And again, I love owlbears as much as the next guy. Hootroar, and all that. But I do think that something was lost when we looked at Gygax's example and instead of thinking "hey, I too will make fun monsters from the things I find in my daily life," we thought "gosh, I sure like owlbears." Obviously in a perfect world we would do both.

I don't think that any of the designers who do this intended that result. I think they intended to show that it was fun to make your guys and fun to use certain tools to do so, and they put their own characters in books because that's fun too. It just kind of worked out this way (and publishers are, of course, invested in getting people to care about their IP), and that's fine. It is what it is. But I still think taking the other perspective can be helpful.
Posted by James Holloway at 03:23