So, another car boot sale find! I suspect this was originally an aquarium ornament. Models fit on it nicely, although I expect I'll get more use out of it in RPGs. Not bad for 50p. 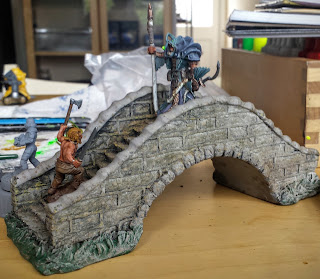 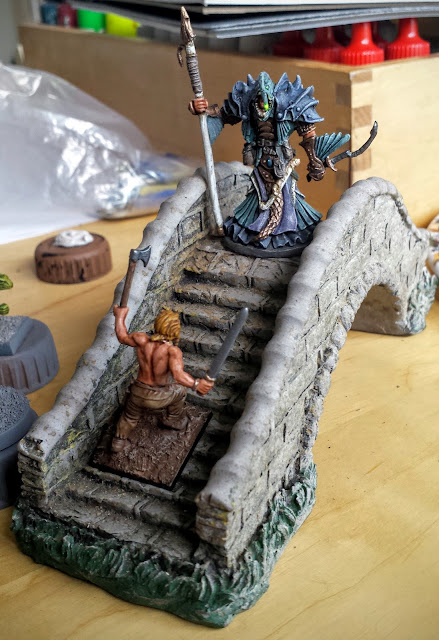 We've seen the berserker model previously, but the guy standing at the top of the bridge is a Reaper Bones ... something or other. Apparently his name is "Eregris Darkfathom," and in my D&D campaign, rife as it is with cultists of Dagon, I think he'll make a rather dandy villain. Like most of today's models, he was primed grey, then progressively drybrushed up to pure white. I went back and added the colours with washes, letting the combination of the wash and the underlying drybrush do the highlighting for me. I picked out a few details and the job's a good 'un.

Basically, I've been trying to clear a lot of my backlog lately, and that means speed painting. Sometimes -- like with this guy -- I get a result I'm quite happy with! Other times, it doesn't look as good, but it's OK because speed has a virtue of its own. Here are a few other things I've painted since my last painting update: 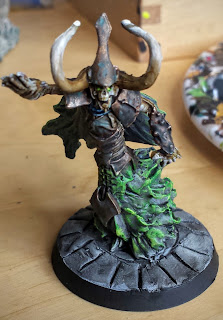 This model, by contrast, is everything a Bones mini shouldn't be -- a mess of hideous mould lines all along flimsy parts that will just bend out of the way when you try to clean them up. He looks a little better than this -- this is not a great photo -- but by the time I'd been struggling with him for a while I just didn't give a crap. He got done because I'm nearly done with all the various skeletons that came in the Bones 2 Kickstarter, and he'll probably turn up in D&D but other than that he can go to hell. 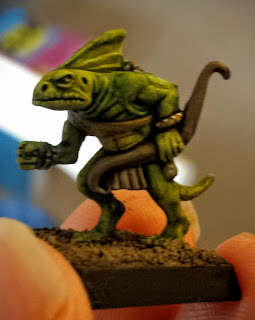 A couple of weeks ago -- while I was at Bring Out Your Lead, in fact -- my wife picked me up a big box of old miniatures at a charity shop. Most of them were the old 5th edition WHFB plastics, mainly Bretonnians, but there were a couple of late-90s metal elves in there too. Sold the elves for a small profit on eBay and now effectively have a couple of dozen free models. That I have no use for. But free! Anyway, this little lizardman (from the WHFP 5th ed boxed set -- was one of them, and he too was tinted using washes and then had some detailed areas picked out to pretty him up. For a cheapo plastic rank-and-filer I think he looks not bad, although there is a dreadful old-timey mould block thing just sticking right out of his back.

Anyway, that is ongoing painting for now. A more substantive update to come!
Posted by James Holloway at 01:39