Minis for RPGs and skirmish games like Strange Aeons sometimes require a different approach than painting for a wargaming army; chances are they're only going to get out on the table every once in a while, and you want to paint a lot of them for variety. This means developing effective speed-painting techniques and not worrying too much about the details. Case in point: this frog-guy and turtle-men from the Reaper Bones Kickstarter (possibly a mix of the first and second Kickstarters, I think).

As the characters in my D&D game are heading back toward a tropic island inhabited by a tribe of laid-back frog guys, I thought I had better finish up the various frogs and lizards in my miniatures collection, so I pulled out this part-finished shaman and these two snapping-turtle guys. 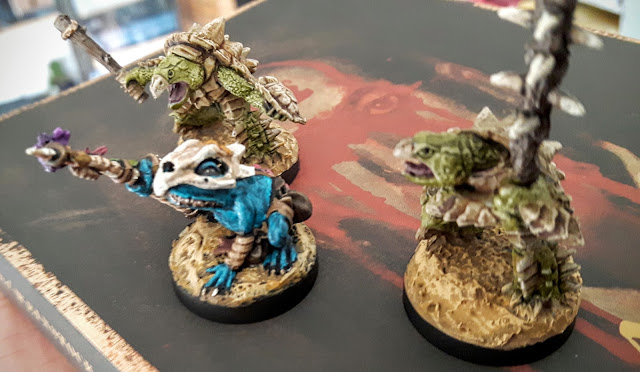 The shaman is an older Bones model, back when I was brush-undercoating them black, but the turtle guys are examples of a technique I'm currently using as much as possible: I prime the figure with grey car primer, then apply a two-layer drybrush, starting with a mid-grey craft paint followed by Vallejo Medium Sea Grey. I then applied the colours using washes -- a mix of yellow, light brown and green for the flesh, and Army Painter Soft Tone for the shell, plus a little red on the inside of the mouth. I went back, dotted in the eyes, painted a few incidental details and gave the shells a quick highlight along prominent edges, and Bob's your uncle.

You'll notice that there are some pretty prominent mould lines on the turtles -- that is because removing mould lines from areas of heavy texture on Bones models is a ballache and I don't have the patience for it. I am conditioning myself not to see them. 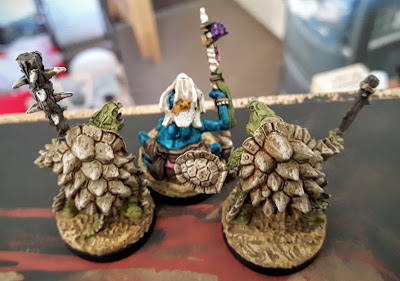 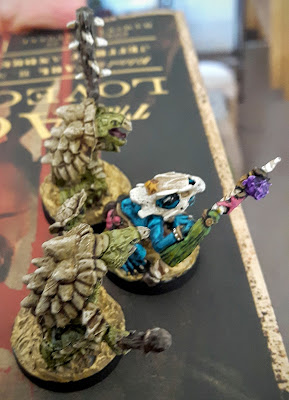 There are definitely things I would do better if I wanted to spend the time, but overall I think they look not bad, and now they're painted and I can move on to a new thing. Although I'm gonna need a separate box for all these various beast-men types if this keeps up.
Posted by James Holloway at 00:54