Review: Sagas of the Icelanders 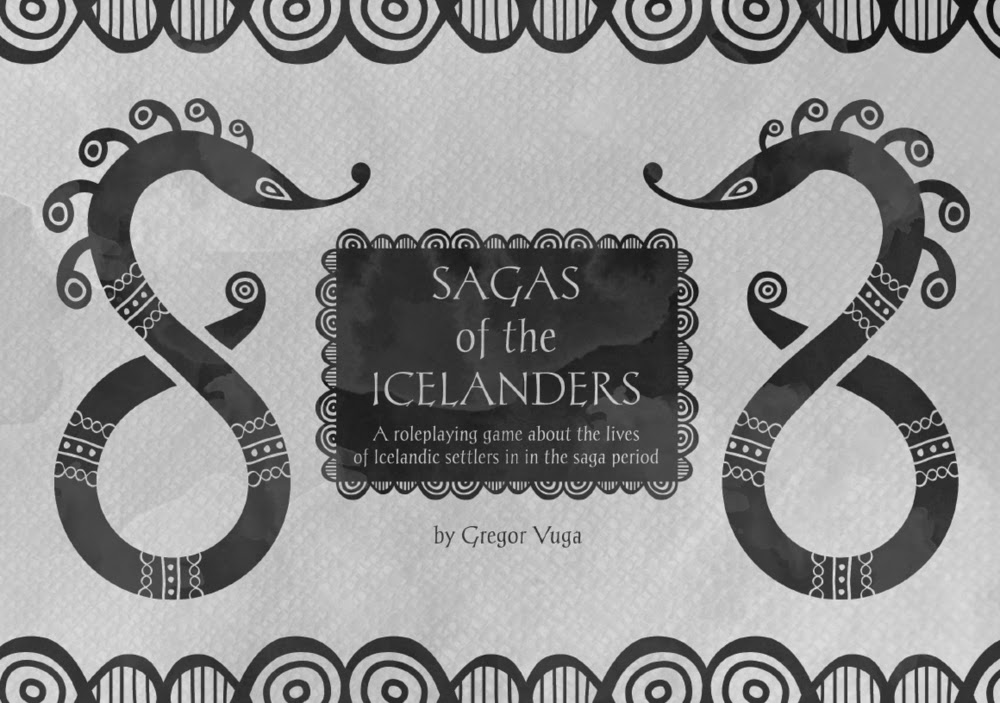 Although a friend had been trying to get me to look at this game for ages, I kept forgetting to, but I picked it up a while back with a bunch of other indie games, including its ancestor Apocalypse World. They get me with these Bundles of Holding, man, no joke.

I have the PDF, which you can get from the publisher for 6 Euros(!). Looks like the print version is sold out.

So, despite sharing the same foundation, this game and Mythic Iceland are very, very different.

I have never played an Apocalypse World-inspired game, but basically most of the things your character can do mechanically are codified as "moves," some of which anyone can do and some of which are unique to your particular playsheet (which is basically a sort of character class in brief). Each different *World game has different sheets: those for Sagas of the Icelanders are:

Each of these has their own particular moves, plus the basic moves anyone can do and some moves that are specific to their gender. You get one free one and then choose another from a list. So for instance, the child might choose to be be able to get adults to sympathise with him or her, or the woman might choose an ability that lets her scrounge up supplies in an emergency. As you go on, you can develop new ones, I believe, although it's late and I'm not going to look that bit up again.

The basic system is very simple: you roll 2d6, usually adding one of the four stats (Young, Versed, Gendered, and Wyrd). Get a 7 or better, you succeed. On a 7-9, you succeed but with some kind of flaw or cost. On a 10+ everything goes swimmingly. Each move specifies what the flawed condition is. Stats start out anywhere from -1 to 1, with some going as high as 2. Again, I imagine they improve over time.

The four stats might seem a little weird, but they're basically measures of how well you do at physical challenges, knowledge challenges, things relating to your social gender role (this is quite a big deal in the sagas) and luck or magical challenges.

You also have relationships to other people, created at character generation, which have a certain number of bonds on them. You can increase bonds by doing favours, giving gifts and so on, and use them to do various things. I like the mechanical reinforcement of social norms; you can also see this in the gendered moves. For instance, the female moves include seduction, hard-headed pragmatism and what saga scholars call "whetting," that thing where women goad men to go kill some fools. Meanwhile, male ones are all about the prickly maintenance of honour and face, which is yet another reason for fool-killing.

I'm at a stage in my gaming life where I'm drifting back toward the traditional, relatively secure in my GM skills and unconcerned with questions of game design per se, so this elegant but unfamiliar design doesn't have the appeal for me that, say, Dogs in the Vineyard did when it came out. Still, a lot of people rave about it and I will try to play it at least once.

Sagas of the Icelanders is a much "thinner" game than Mythic Iceland, both literally and in the sense I have discussed previously. It's much more focused on a relatively small region and set of characters (or at least that seems to be the assumption). While character creation in Mythic Iceland tends to produce a sort of supergroup ("Gunnar, Egil and Grettir team up to solve mysteries"), Sagas is largely about creating a connected group around a single farmstead and leading them through the long-term story of feuds and rivalries and loves and what have you.

Which isn't to say that Sagas doesn't have good historical detail; it's mostly pretty thin, but there is a pretty solid appendix on legal proceedings, some recipes, and other flavour-type text.

I had a couple of gripes: for instance, the book refers to an MC sheet, which is nowhere in the book nor in the downloads that came with the Bundle of Holding. I had to go look for it on Google and find a version of it from 2012. That seems like an oversight. There's also a little mismatch between parts of the book: for instance, the currency system is super abstract -- you have a bit of silver, a handful, a pouch, a chest. Which makes sense, I guess, even though the pedant in me preferred Mythic Iceland's elaboration of the wadmal exchange system. But then in the legal appendix, all the fines are given in marks. Now maybe I just missed where it tells me how a mark fits into that system, but ... is it a little? A lot? I can go look it up (I have a pretty good shelf on the subject of early medieval Iceland), but still.

I'm going to play it at some point, and I'll report back, but for now I'm still happy with enough of the ideas in it that I consider it a good buy, and at £5 I imagine you will feel the same.
Posted by James Holloway at 00:30