No Week of Synnibarr yesterday, I'm afraid -- I was out all day and not able to get around to it. However, I wasn't idle! With the aid of my lovely wife, I recorded what was intended to be a short video explaining the intricacies of Synnibarr character generation. However, while recording the "short" video we discovered the intricacies were ... intricate. My wife pointed out that around the 50-minute mark I said "now we're getting somewhere!"

So instead, I'm cutting it down and breaking it up, and this short piece is only the first installment. I hope you will enjoy it regardless.


The other thing I wanted to talk about today was Synnibarr's art. Unlike a lot of fantasy games, Synnibarr's art is very comic-like. Outside of comic-based games, I think this is actually pretty unusual in games, isn't it? The only example I can think of is Palladium, which always had a lot of art by comic artists, whether Richard Corben and Berni Wrightson in Beyond the Supernatural or Denys Cowan in Ninjas and Superspies. And there was some Mike Gustovich in there as well, but I assume that's because Palladium published a Justice Machine supplement for Heroes Unlimited. Come to think of it, Synnibarr is quite Palladium-like in some ways, although maybe I'm just saying that because it has a pre-DTP 80s-style layout and that's what Palladium games also look like.

Now, when we think of a 90s game that has lots of mutants and ninjas and whatnot and comic-inspired art, we probably assume that there's going to be 80 million teeth and lots of pouches strapped tight across the thighs, floppy hair, all that kind of thing. I hate that stuff as much as the next guy, but that's not what's really present in The World of Synnibarr. I think Synnibarr's art is actually more consistent with a sort of late-80s comic fandom in a lot of places. That's not to say that there aren't any obvious 90s-isms, like these guys: 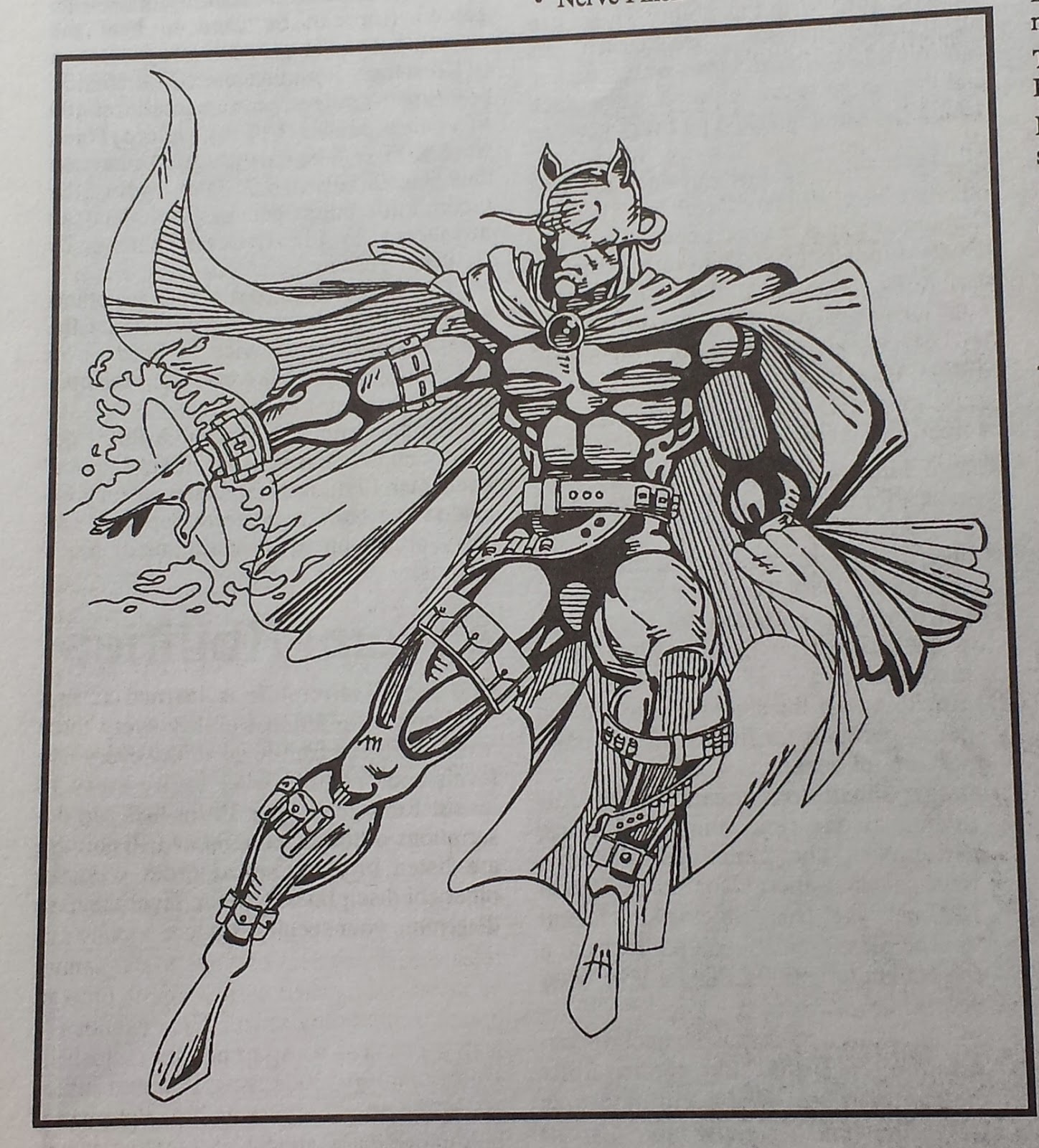 But there's also what appears to be a lot of John Byrne influence, particularly around the mouths and also the wholesale copying of characters from Alpha Flight.

Take this image of a "Tiger" martial artist, for example. I looked at that and thought "hang on, that's Guardian from Alpha Flight." 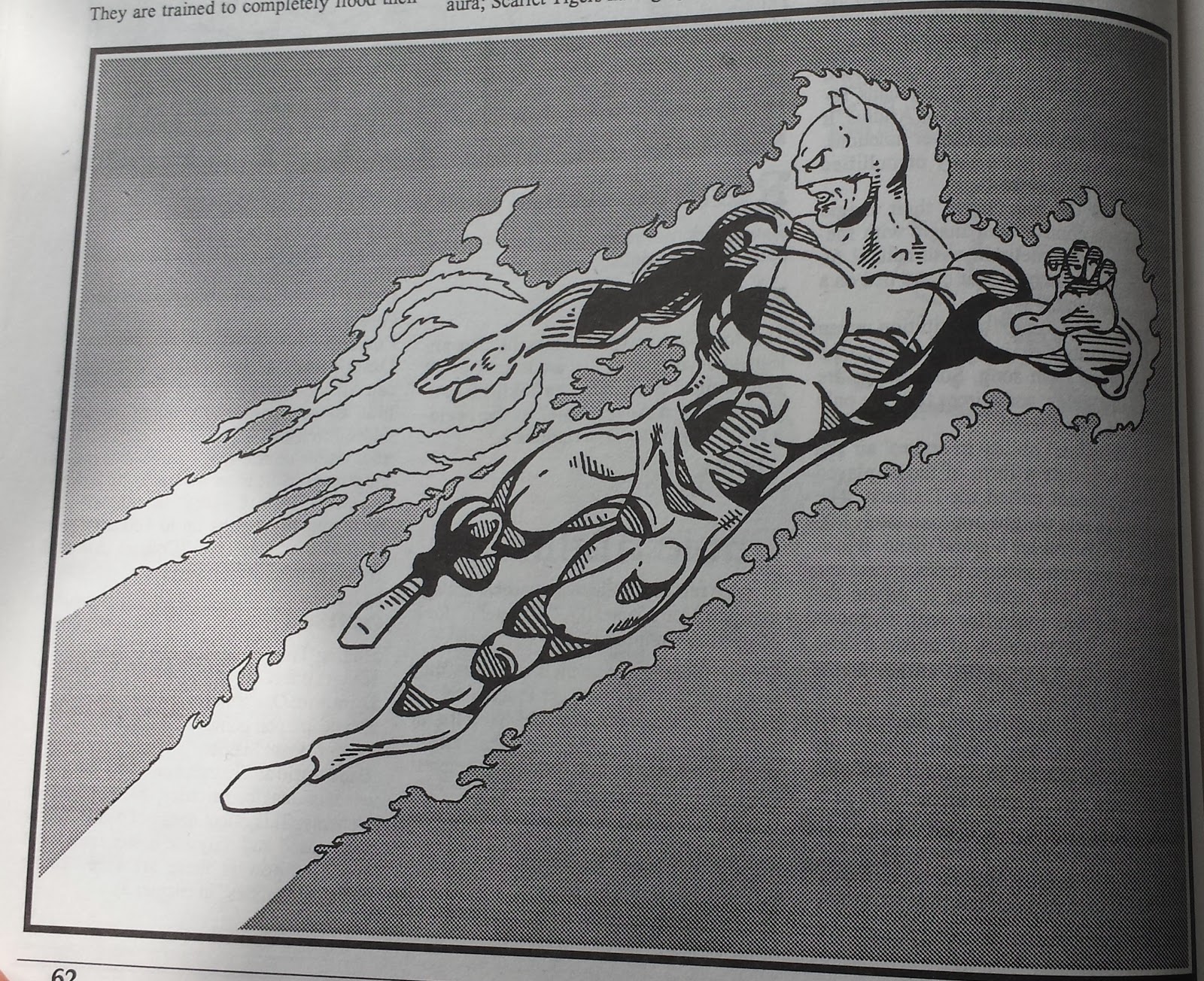 So I Googled "Alpha Flight John Byrne" and what was in the first row of search results? 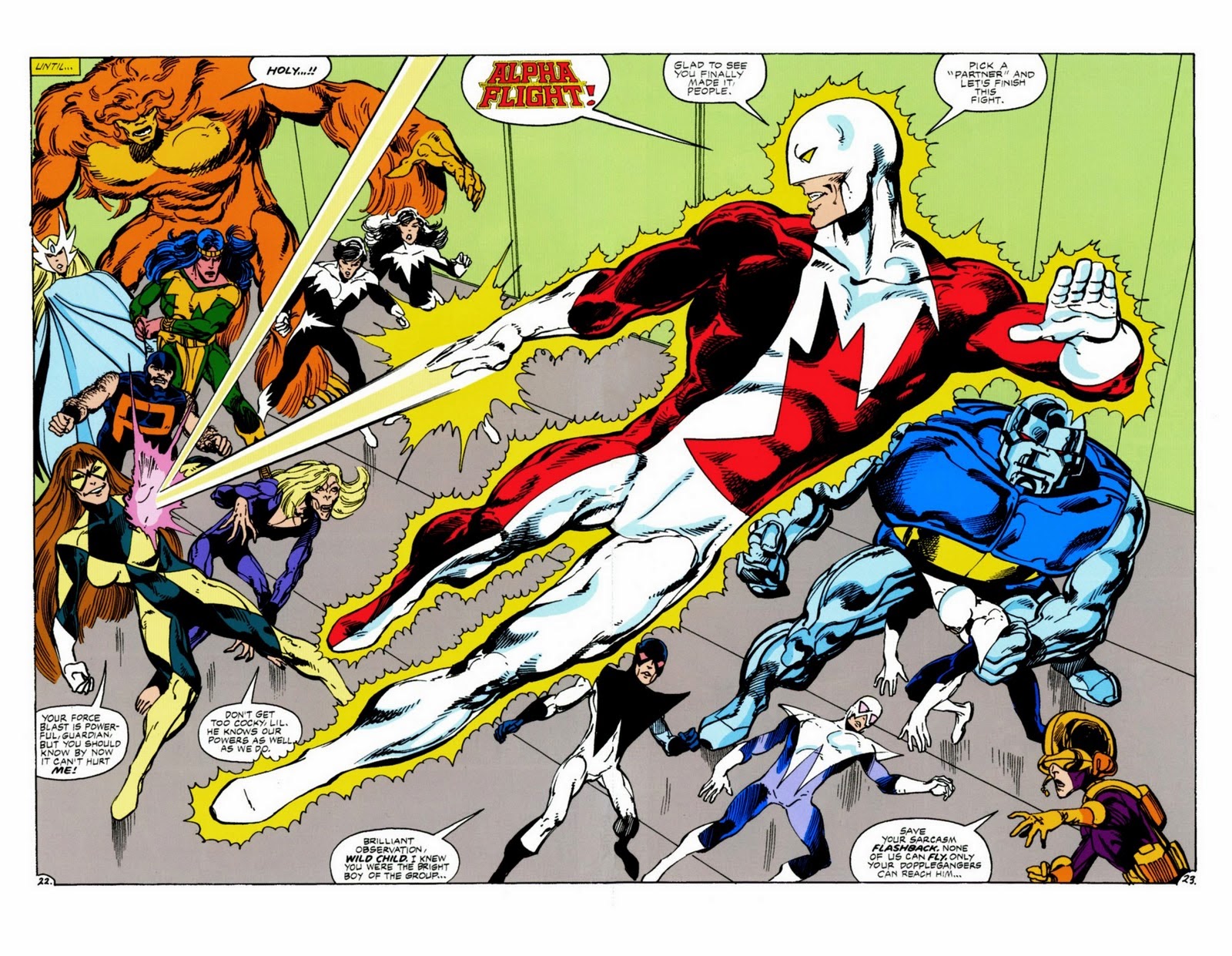 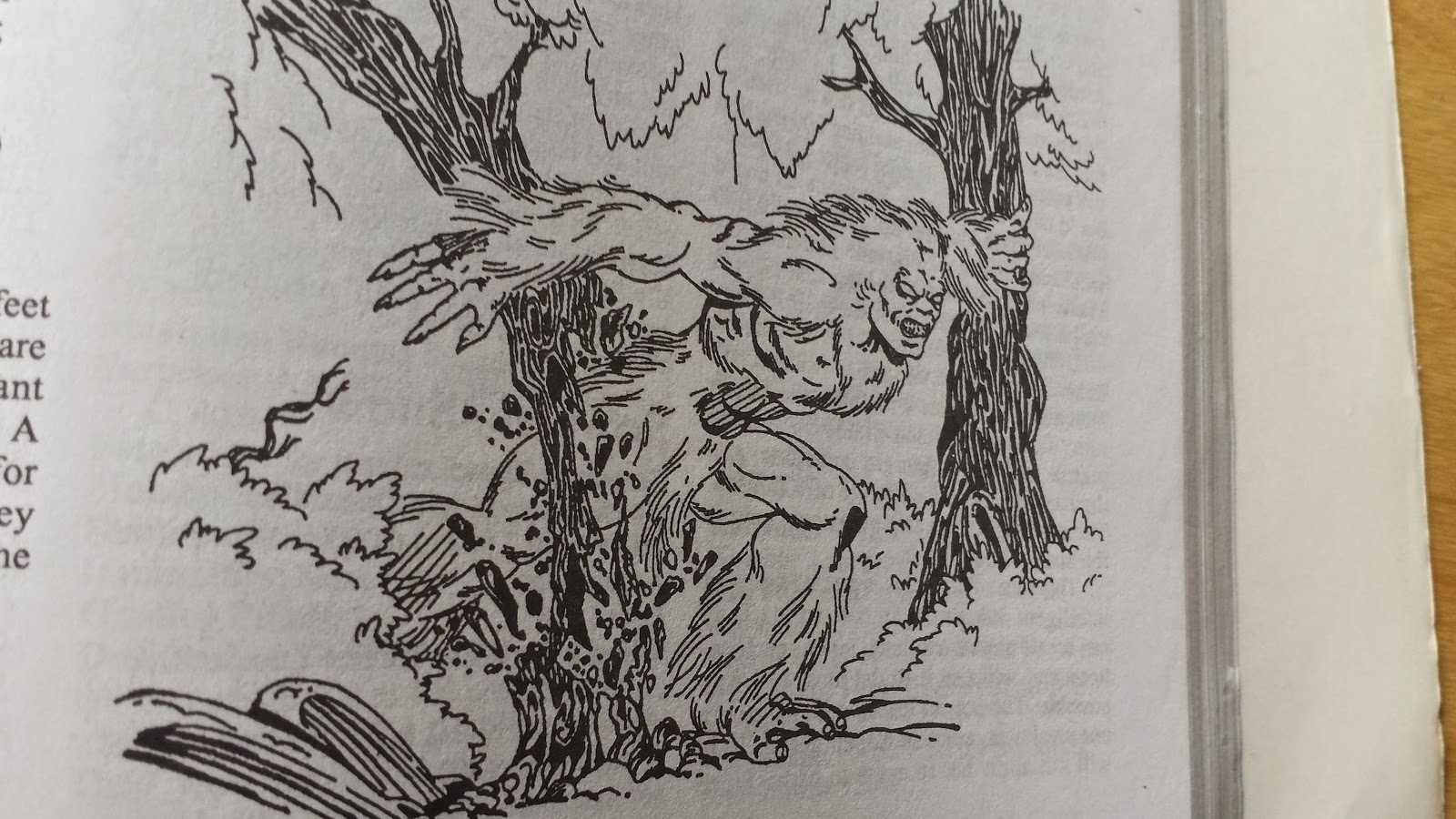 There are also quite a few characters I strongly suspect of being comic characters but can't quite place.

And then how can any discussion of Synnibarr's art be complete without this cheerful little guy? 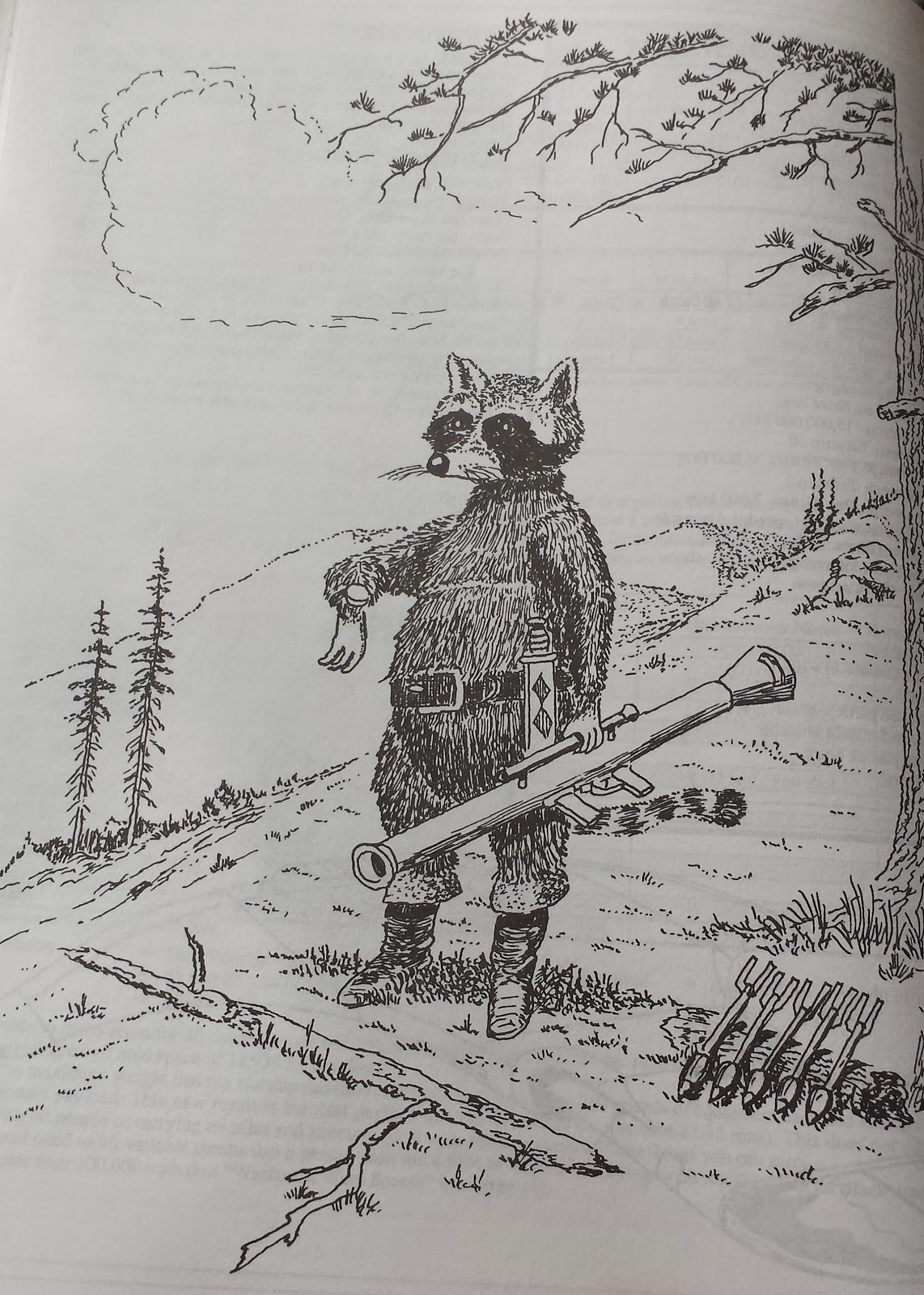 Now, I don't want you to think I'm hating. Again, this is all part of the lifelong-RPG-campaign-ness of World of Synnibarr. When you made your first character, don't tell me your character portrait wasn't something you traced from a comic (or whatever). Legalities aside, I think it adds to the charm.