I mentioned earlier that my vacation has involved a certain amount of game-product shopping, largely at the gaming flea market at Game Kastle in Santa Clara but also at local used bookshops and gaming stores. Here are just a few of the things I acquired:

Today I want to talk about one of these acquisition's, 1987's Ravening Hordes. 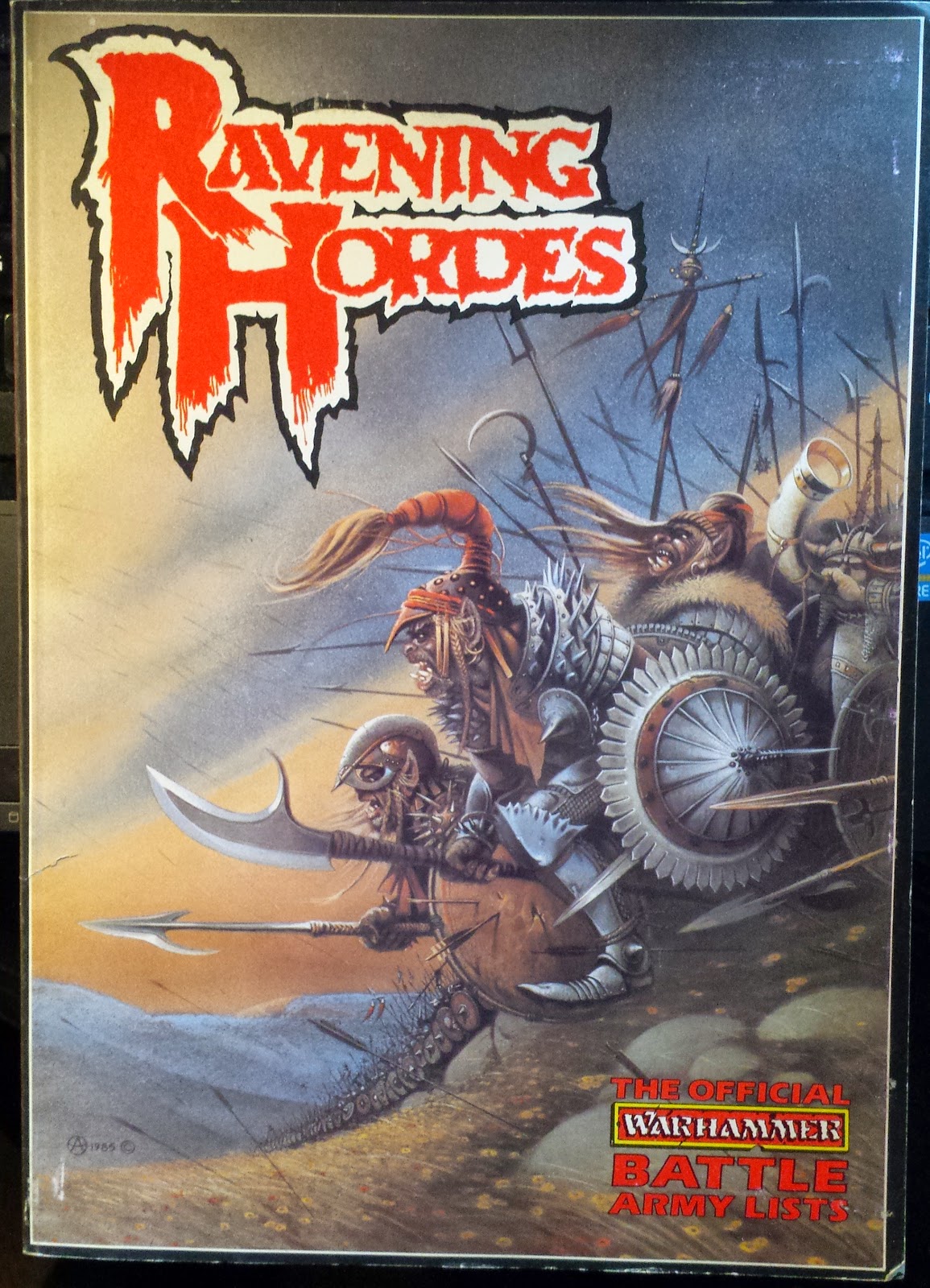 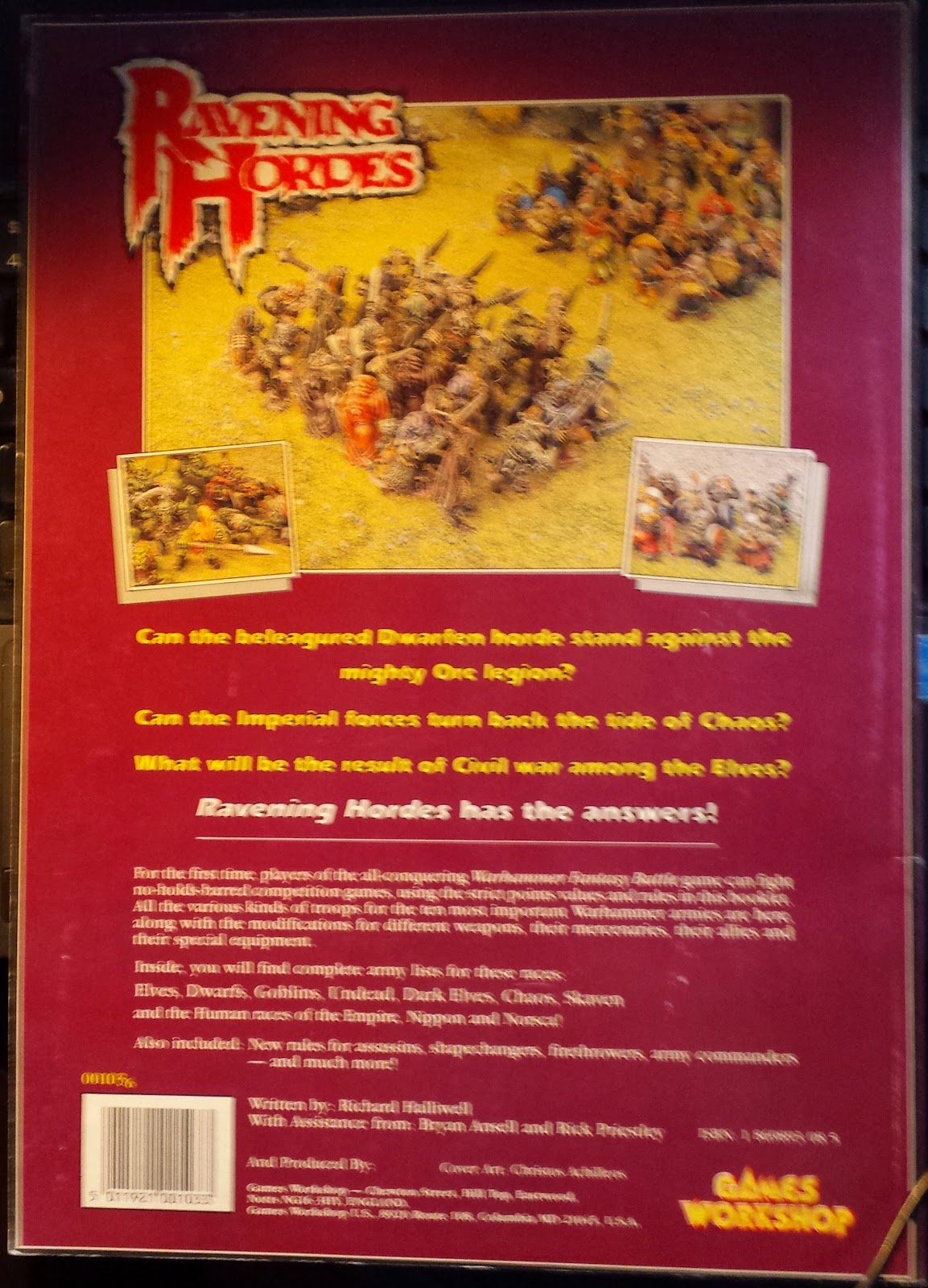 This supplement for Warhammer Fantasy Battle (second edition) is sort of the birth of the modern fantasy wargame, in the sense that it is a big pile of army lists, with lots of different characters and war machines and creatures with special rules -- up to that point, it was very much the case that you just put whatever the heck you liked in your Warhammer army. Here we see the movement toward the competitive game, even the tournament. Obviously that formula would be even more refined in 3rd edition with Warhammer Armies, but at least to my untrained eye Ravening Hordes looks very much like the bridge between 2nd and 3rd editions.

Others, I'm sure, have said better things about Ravening Hordes, so I won't go into too much detail here, but I did want to draw attention to a few things:

The differences between this edition and the Warhammer I played (4th-6th editions) are interesting, as are the similarities. A lot of the iconic troop types are present: Fanatics, Flagellants, Witch Elves, Knights Panther, and what have you. But there are also a lot of things that are clearly sort of left over from Warhammer's D&D and Tolkien roots, like half-orcs. The Empire is clearly much more medieval than it would wind up being (although it does have a lot of gunpowder weapons), the whole Ulthuan/Khaine mythology doesn't exist yet, but the Skaven are almost exactly the Skaven of later editions, right down to the names of the clans and the many and weird special weapons.

The Beastmen are showing their roots, too. Check out this illustration from the Chaos army list: 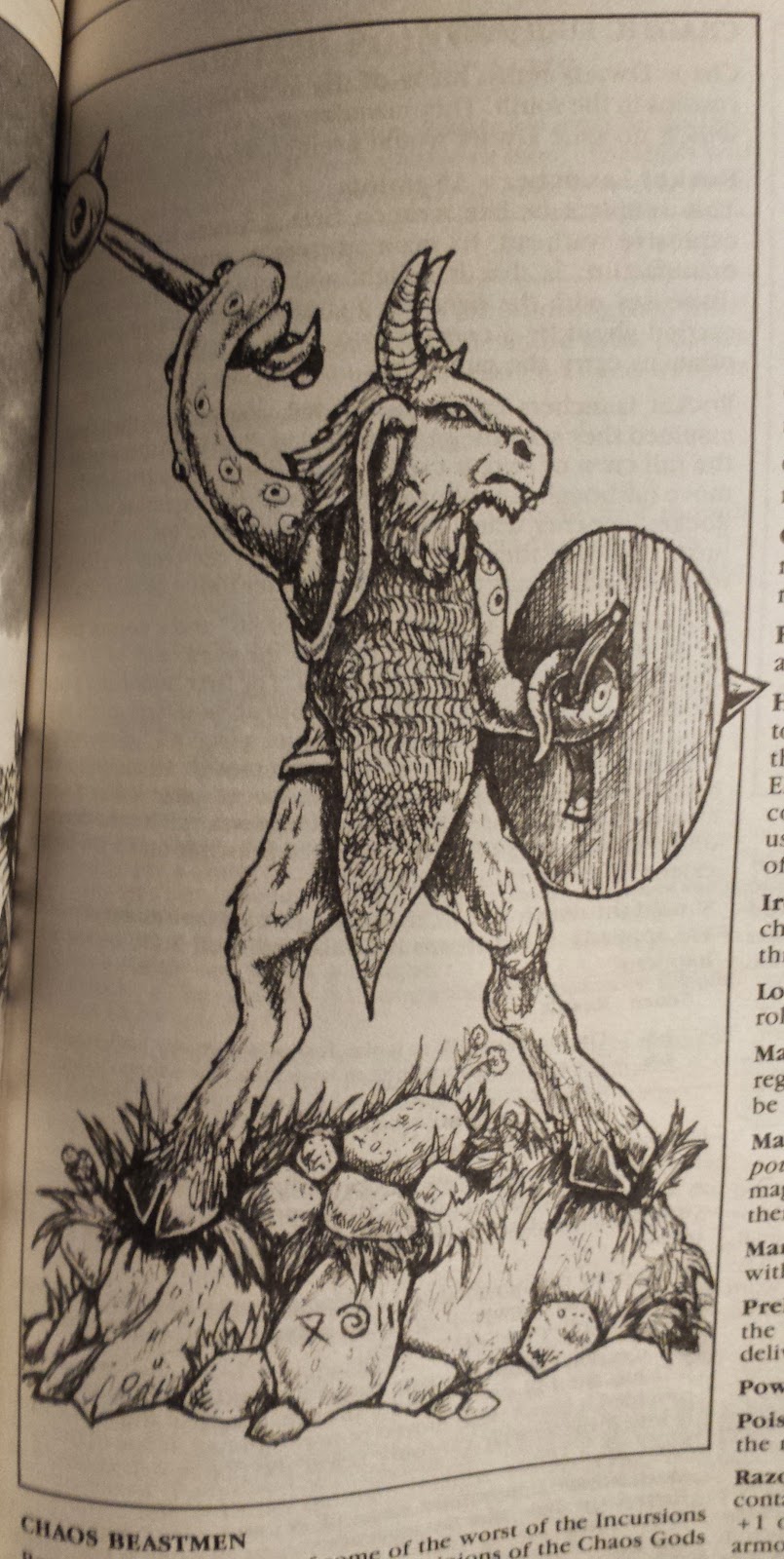 Look at the glyphs on the rock the Beastman is standing on: those are the Gloranthan runes for Somethingorother (it looks like an Earth glyph with a missing lower bar? Someone want to help me out?), Storm and Harmony. If it is an Earth glyph, it seems like "the wedding of Orlanth and Ernalda," a sadly ironic image to juxtapose with what this creature obviously is, a Broo.

The book also came with a flier advertising packaged armies in conformity with the rules in the book. The cheapest one is a Dark Elf army -- that's 123 models for £55.00. According to this site, that's approximately £141 in today's money, which is still a pretty good deal for 123 figures. The most expensive is 274 models for £120, or £307 in today's money. I think that's probably feasible, possibly feasible even in metal, but not perhaps feasible from GW. I may try to do this as an exercise at some point in the future. 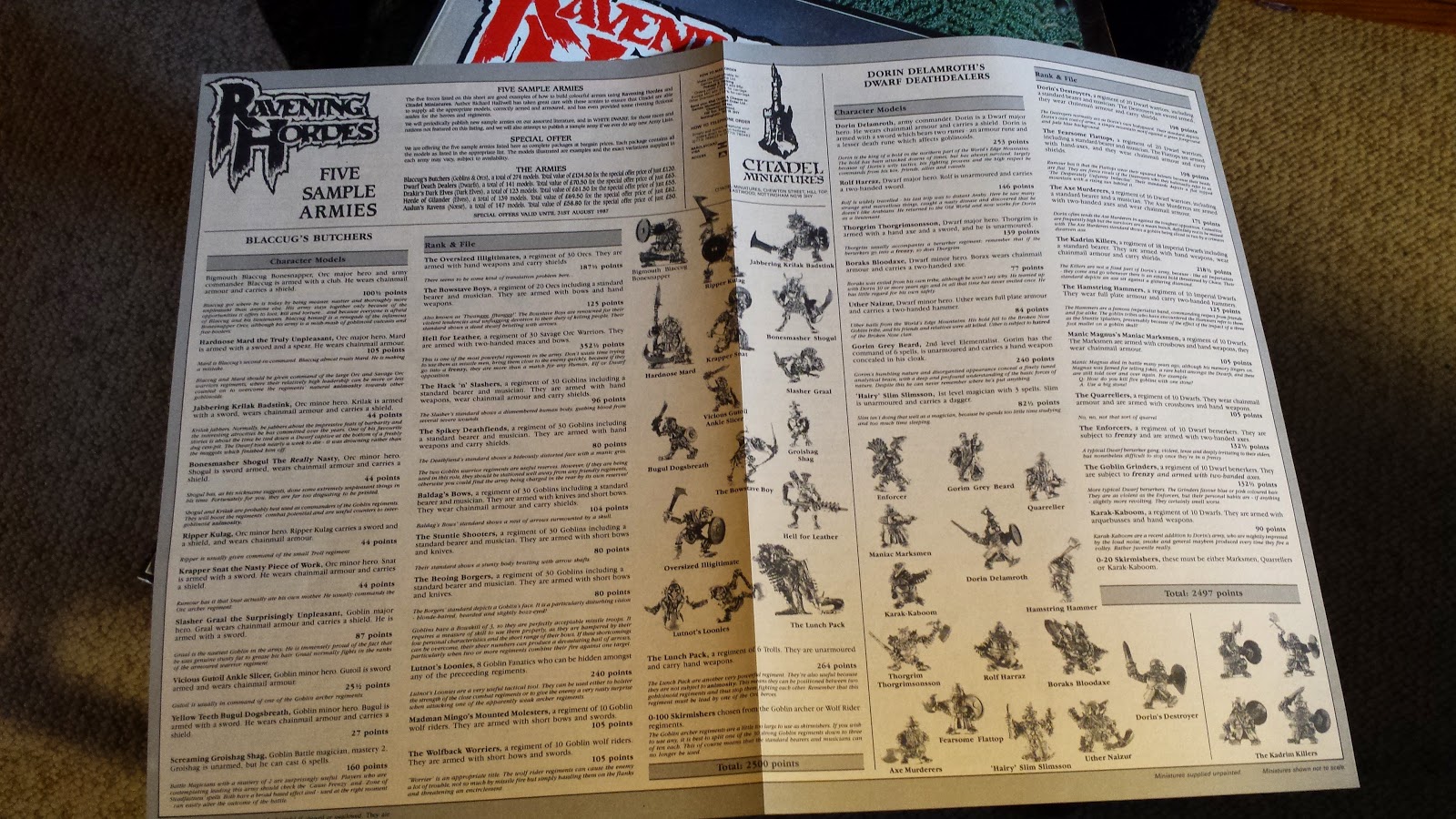 It was fun reading Ravening Hordes, but I doubt I'll hold onto it -- I have a copy of 3rd edition, so if I'm going to play the game I should probably hold out for Warhammer Armies.