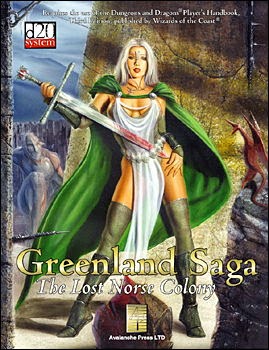 As you may recall from my posts about Saga, Mythic Iceland and Sagas of the Icelanders, I tend to acquire games that deal with the early medieval period. Greenland Saga is sort of an outlier, since it's not actually set in the Viking age, but rather in the 1450s. This is quite an early third-party third-ed scenario, if I remember correctly, released in 2001. It was written by Michael Bennighof and published by Avalanche Press. AP are still around, but they're not making RPG products any more.

Controversy over the covers of Avalanche Press's RPG supplements was one of the ongoing arguments of the early d20 era, and I don't want to rehash it here. In principle I agree that there's nothing wrong with any given sexualised image of a female character -- the problem is simply that there are too few non-sexualised images of female characters, a lack of equivalent images of male characters, etc. However, despite the cheesecakey model and pose, my problem with this cover is not that. It is this: this cover illustration sucks. For two reasons!

First, quite apart from the outfit, what the hell is she doing? Her pose looks awkward and unnatural; look at how loose her hand is on the hilt of the sword. She's standing slightly on tippy-toe (or something; the line between whatever's behind her and the floor is really mushy) while either drawing a sword backward from her belt or stabbing herself in the hand. If she's drawing the sword, why is it covered in blood (and where's its scabbard?); if she's sheathing it, why is she doing that considering she seems to be surrounded by enemies? What is the blurry sort of dragony thing in the right of the image? What is the thing in the foreground, partly obscured by the AP logo? In short, what in the hell is going on in this illustration?

But the fact that the image isn't good is only the lesser part of the problem. The more important point is that the cover gives you a very misleading idea of what kind of scenario this is. Greenland Saga is. In a sort of what-the-hell, high-fantasy romp, this chainmail-singleted Valkyrie would be a fine (if clumsily executed) cover image. But that's not what this is; Greenland Saga is a heavily historically-inspired scenario with lots of references to the sagas, particularly Grœnlendinga saga and Eiríks saga rauða. The Valkyrie appears as a suggested character on one page of this scenario; this is the only image of any character in the entire thing (there's almost no interior art).

So what we actually have is a D&D adventure for history nerds, while what the cover depicts is an 80s trash-fantasy throwdown.

Which is a shame, because it's an OK scenario

The gist of the scenario is that a Papal agent in Norway recruits the PCs (who may have worked for the church in a previous adventure) to go and find out what's going on in Greenland, which has been out of official contact for some time. When the PCs get there, they find that Greenland's Norse population is dwindling and that the locals are reacting to this fact in different ways.

The interesting thing that Greeland Saga does is that it doesn't provide a single explanation for the disappearances. It gives some mundane explanations (the colonists are getting ready to abandon Greenland for a more welcoming North America, the colonists have been enslaved by unscrupulous Portuguese cod fishermen) and a supernatural one (the colonists are under attack from unipeds, legendary creatures mentioned in the saga). 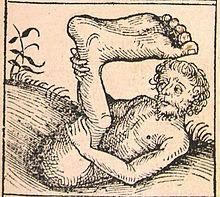 Most of the scenario is actually focused on travelling around the different parts of the Norse colony on Greenland, talking to different people and figuring out what's going on. It's possible that there will be a lot of combat, but there are few scenes where it's absolutely called for -- it's more a byproduct of travel in a harsh environment than anything else.

There are two main problems with the scenario: the first and most significant is the rules system. Historical scenarios test the limits of the D20 system's adaptability. Here, for instance, we're told that the party should include a cleric, but that clerics shouldn't be able to a) cast spells, or b) be proficient with weapons or armour. While this is a pretty accurate description of actual 15th-century priests, it does make playing the party cleric a suicide mission, considering that clerics also don't get a lot of skill points. Similarly, every who-gives-a-crap sailor, beggar and merchant in this scenario gets a full D20 write-up, complete with Forgery skill or whatever, just in case ... something. There is nearly nothing that couldn't be achieved just by saying "Level 1 Commoner." You see the same problem with something like Skull & Bones -- the writer is fighting with the rules a bit to fit them to the history. The difference is that S&B made up for it by providing a ton of new historically-inspired rules.

The second problem is with the historical content itself. There are a few editing glitches -- for instance, some of the Old Norse words have rendered incorrectly, presumably because the special characters needed went missing at some point in the production process. There are also a few simple goofs -- for instance, that valkyrie on the cover? Her name is Sigurd. Not Sigrid; Sigurd. Which is a man's name. I mean, I guess people can be called anything, but it's as weird as if she were called William.

But the thing that keeps jarring me is the inconsistency in terms of how historical we're meant to be. So there are, no fooling, rules for getting dysentery from drinking the water, which you're supposed to roll every time you drink. There are stat penalties for female characters, because "life is not fair. Deal with it." But then one of the first people the characters meet is this like beautiful but deadly Italian merchant princess assassin -- in fucking Bergen -- with like a fancy gown filled with throwing daggers. So which is it? Is it James Bond in the 15th century, or is it a game where you have to constantly roll to see whether you get the death shits from drinking water?

There's a sentence I did not anticipate writing before I bought this thing.

Anyway, it's got a few useful bits (unipeds, I guess, although again Skull & Bones has better monsters-from-medieval maps) but overall it's more interesting as an example of the kinds of things people were experimenting with in the early days of the D20 boom than as a scenario. It does have a few useful maps, and the idea of the different explanations (and a section discussing how to combine them) was a good one.

So: concept OK, execution flawed, I am a weird completist who has bookstore credit he seldom gets to use.
Posted by James Holloway at 01:59