Over the long weekend I have been doing some catch-up painting, much of it just to take care of some simple terrain and other needs. My first post is about some brick walls I picked up back when Modelzone was shutting down. These are Tamiya 1/35 brick walls, I believe. I don't think they're 1/72.

Anyway, this is not all of them -- I think there's another piece in the box which I painted earlier and may have mislaid (or it may be in my terrain box where it belongs).

You can stick the various bits together in different configurations. Mine look like this:

The stepped ends line up so that you can flip them over and link them together:

I primed them by spraying them grey -- with a brick wall the gaps are actually lighter than the bricks, which is not normally how things with gaps work. I then used torn-up blister pack foam to sponge them with Homebase "bitter chocolate" masonry paint, then again irregularly with cheap "rust red" craft paint, then again with Vallejo something-or-other; some orangey-brown.

I then went pack and picked out a few individual bricks with the orange and the dark brown. The result was to give the wall a nicely mottled appearance. 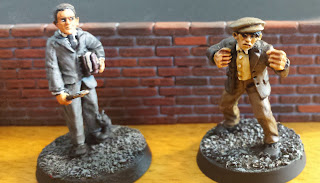 As you can see, the walls go well with these 28mm figures, even though they're nominally 1/35 scale (I think -- unless there's a 1/48 version? I am pretty sure it's the 1/35). I think the blotchiness of the bricks is just right.

So yeah, I bought the thing for like £2 or £3 and now I have a few walls that I can use for Strange Aeons or other modern-ish games.
Posted by James Holloway at 01:32