Bring Out Your Lead is an annual, community-organised gaming ... thing. It's not a convention per se, it's just a weekender of gaming and celebration and special stuff, hosted by Wargames Foundry. Gaj of Warhammer for Adults herds the cats, people volunteer to host games and the whole thing turns out splendidly. At least that's what I had heard, because I had never been to one. 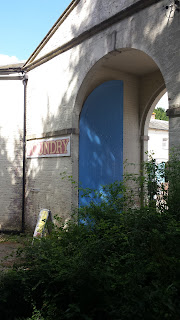 I caught the train to Newark and headed over to the Foundry, which is located in the Carriage Court of Stoke Hall. Games were already beginning. I snapped a few photos of the ships for the Oldhammer Ahoy! game. I don't know who made all of them, but some were by Geoff of Oakbound Games. 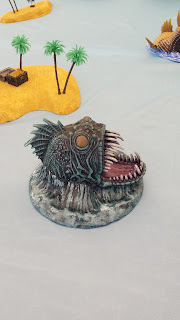 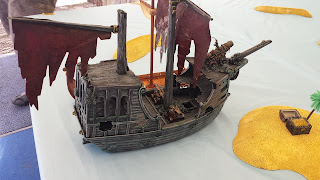 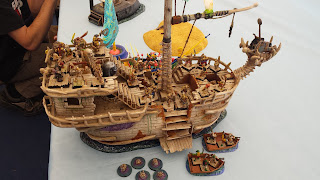 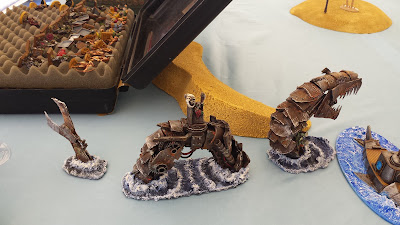 The Foundry also had displays of classic Citadel figures. I snapped a few shots of particular favourites, especially this Genestealer cult: 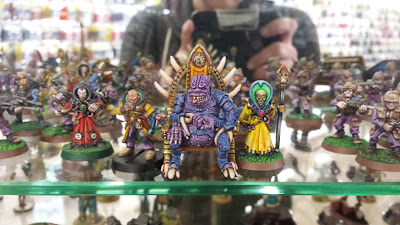 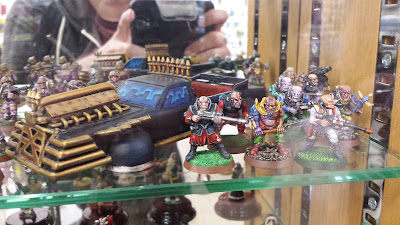 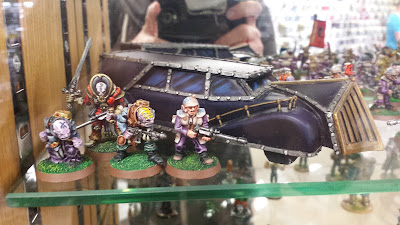 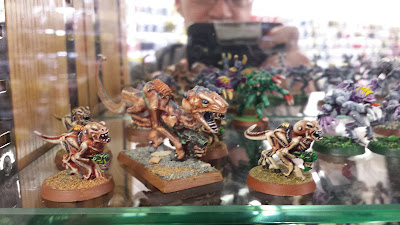 Some games were already underway:


My first game of the weekend was a Judge Dredd game based on the storyline "The Day the Law Died." I had brought along a model, Judge Ford, who was a gift from my friend Josh. Since Judge Ford was meant to represent him, I thought it would be cool to include him in a story that featured some other SJS characters.

Some highlights from the game: 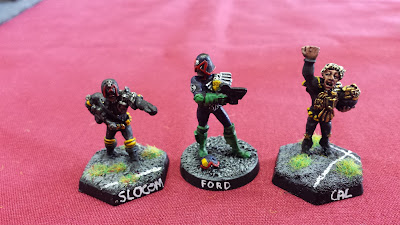 My last game on Friday was a quick Mordheim game, in which I played a Norse warband. Models and terrain were all provided by my opponent, whose name I am not sure about. Stu? I didn't take a lot of photos because my battery was dying. 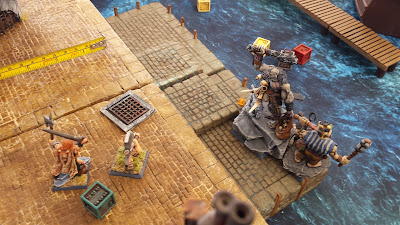 We ran out of time in the evening, but finished up on Saturday morning.

My main game on Saturday was the Fallout Rogue Trader game, in which I played the forces of the New California Republic. I used Capitol models from Warzone 2nd edition, which I chose for their characteristic Smokey-the-Bear hats. Forum member Legiocustodes hosted the game, which also included blogger JB of Lead Plague.

My next game of the evening was Chainsaw Warrior using Space Hulk rules. This was a lovely little game designed and run by Aidan of Warfactory and his young helper; they also played the cultists in the game above.  I didn't get any photos -- dead phone again -- but I won the game with only nine seconds left on its 60-second clock.

One of the amazing things about this day was that Kev Adams was doing custom sculpting for charity -- you slipped the man a fiver and he would sculpt a new face for you on a 28mm model of your choice. I got one of those, and as soon as I get some photos done I'll post it.


Sunday ... Sunday meant just one game for me: Deathrace 40,000. This game, organised through the Oldhammer Forum by Captain Crooks (who was visiting all the way from Australia), saw each player creating a vehicle and steering it through a racetrack filled with hazards, power-ups and whatnot ... basically Mario Kart in the oddball black comedy of the 41st millennium.


I can't tell you how great Deathrace was -- a fun and simple system, beautiful, creative vehicles, and a tense, exciting race. They're already talking about next year's game.

After the cleanup, Captain Crooks and I split a cab back to town -- but having nowhere to go for a bit, we just hung out for a while and watched British gaming legend Bryan Ansell sculpt a hand on a model for Crooks. Artist Tony Ackland, of Realms of Chaos and WHFRP fame, was also there, and we had a good chat about many things; in particular, I learned about the late Brett Ewins' bizarre fashion sense and the fact that Paul Bonner's darkly colourful paintings are watercolours(!). When it came time to get back, there was a brief panic about getting a cab in time -- Foundry boss Marcus Ansell helped us out and even showed us a shortcut to where we needed to go.

Oh, and I got a crapload of miniatures -- more details to come, but a particular mention should go to Geoff Sims of Oakbound Games for providing free souvenir models to the deathracers. Models, in fact, of those stumpy Gnomad bastards who sent my lovely Tombstone Express to the pitstop with blown tyres. He is good people and you should buy his stuff. There are lots of others who contributed, and I'm leaving them out not because I want to diminish their contribution but because of space.

The whole experience was great from start to finish. The surroundings were lovely and the food was nice; the behind-the-scenes look at miniatures casting was very interesting. The games were great, and staged in a spirit of passionate amateurism; every figure on the tables was clearly a labour of love. I was a little nervous because I only knew a few people personally, but everyone welcomed me like an old friend, which was very gratifying. The whole thing was ... enthusiastic and laid-back at the same time, which is one of the things I like about the Oldhammer community and a very tricky balance to achieve. If I can make it back next year, I definitely will.
Posted by James Holloway at 01:23