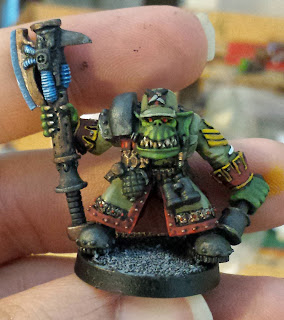 This Blood Axe Nob was one of a big box of Warhammer models I picked up in a charity shop for £20 -- many thanks to my keen-eyed wife! I sold off the Man O' War models to recoup the cost, which left me with some Orks, a Rapier Laser Destroyer, some nice old AD&D monsters, some barbarians for my D&D game and I forget what else. Definitely a winning purchase.

Anyway, his uniform colours -- WWII Russian army green with raspberry, yellow piping and brass fittings -- are based on my Neo-Sov models, who serve an Imperial-Guard-ish role in my games. I decided to do the blade and piping of the power axe in a light blue partly to be consistent with other power weapons I've painted and partly just for a localised area of contrast!

I love this model, in much the same way that I love many of his contemporaries from the Ork books era -- although the core of my Ork force are the old Space Ork Raiders, I think that's actually not the point where the Orks reach their zenith, which is of course the mature 1st edition period. It's a lovely big, imposing model -- but also covered with fiddly detail and hell to paint (table for the middle of study has not arrived yet, which means the area where I'm painting is in the corner and quite dimly lit).

Looking at him in the photo, I can see that he has some areas that need tidying -- I told myself he was going to work on his medals a bit, which I did not do, and the brass crosses on the hem of his coat need a little tidying. Still, overall I'm pleased with him, especially the face and power axe.
Posted by James Holloway at 00:33