The long-awaited return of Mashup Monday!

It's been a busy week, but one that has been marked by the acquisition of some new books I'm excited about reading. To celebrate, let's do another mashup exercise. 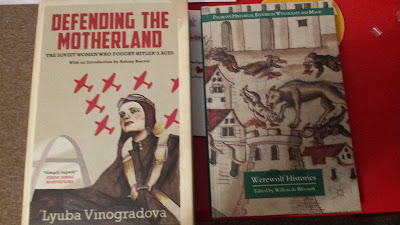 Lyuba Vinogradova's Defending the Motherland is about female Soviet fighter pilots during WWII and Werewolf Histories, edited by Willem de Blecourt, is a collection of academic papers about werewolf beliefs in (mostly?) medieval Europe. I haven't read either of them yet. Let's open them, flip through a bit, and see what we can find. 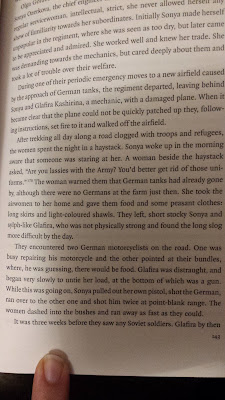 "They encountered two German motorcyclists on the road. One was busy repairing his motorcycle and the other pointed at their bundles, where, he was guessing, there would be food. Glafira was distraught, and began very slowly to untie her load, at the bottom of which there was a gun. While this was going on, Sonya pulled out her own pistol, shot the German, ran over to the other one and shot him twice at point-blank range. The women dashed into the bushes and ran away as fast as they could." 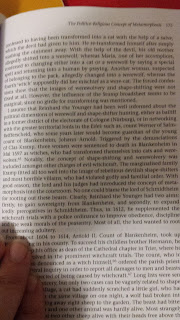 "The marginalised family Kramp fitted all too well into the image of rebellious devilish shape-shifters and most horrible villains, who had violated godly and familial order. ... No one could blame the lord of Schmidtheim for rooting out these beasts. Clearly, Reinhard the Younger had two aims: firstly, to gain sovereignty from Blankenheim, and secondly to gain lordly prerogatives in Schmidtheim."

This all sounds quite WFRP-y, or for that matter my-D&D-game-y. So in order to eliminate a family of political rivals -- or just local troublemakers who are making his life difficult -- a jumped-up local lord accuses them of being werewolves, forcing them to go on the lam. The only problem is that they actually are werewolves. Or perhaps in true classic horror-comic style they aren't werewolves, but are merely highly-trained assassins who are cutting the throats of every hapless son of a bitch waving a sprig of wolfsbane at them? If you want to use that angle, vampires is funnier.

Or maybe being accused of werewolfism is like bad-jacketing; if someone accuses you of being a werewolf, you're screwed. So screwed that the werewolves will come along and offer to "help." Either way what you get is two young daughters wandering along the side of the read with their bindles and occasionally ripping the throats out of soldiers. Works for me.
Posted by James Holloway at 12:21