It isn't always easy to find civilian models. That's true of most periods, and probably less so of the interwar period than most. But still, if you want to do some Lovecraftian gaming it's nice to find a new source of potential investigator models.

One place you might not have thought about looking is in a board game. In fact, a 1990s version of Cluedo from UK publisher Waddington's contains some nice plastic investigator figures. It's this one: 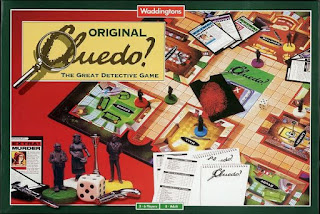 Look for the images of the figures in the bottom left-hand part of the box art.

I don't believe this is still in print, but I see it at car boot sales and in charity shops all the time. I'm half-tempted to buy them if they're cheap and just resell the figures. They really are ideal for 1920s gaming.

Now, note: I'm not talking about the Mark-Copplestone-sculpted metal models that came in some fancy version of the game. I believe those are the rather tall models you can still get from Moonraker Miniatures. Someone can correct me if I'm wrong. I haven't seen these in the flesh so I don't know how they scale. There appear to be other editions with figures; again, I don't know if they're in a useful scale.

These ones are plastic models (with tabbed feet and small slotted bases) and they look like this: 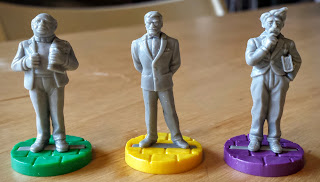 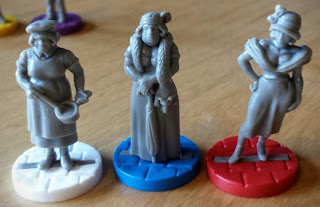 Not bad little figures -- I have had a bit of a go at their mould lines but nothing else. You can juuuust see a little discolouration on Miss Scarlet's ankles, and it wouldn't surprise me to find that they are rather fragile. Other than that, plastic quality looks like GW monopose models of the 90s, i.e. OK. Note that the plastic colour is much lighter than the colour on the box cover. I don't know if there's any variation.

How do they fit in with the other models in my Cthulhu collection? Let's have a look:


As you can see, they're a trifle on the large side, but not absolutely gigantic. If your collection is all Metal Magic / Moonraker or Rafm, then yes, they'll tower over your models. I understand Murch's later Pulp Figures line are somewhat larger, but I don't have any so I speak subject to correction. They are a leetle taller than most Copplestone models (and my experience is that Copplestone and Artizan are usually around the same height), but not so's you'd notice. I myself don't care much about scale, as you can tell from the gigantic and tiny models in some of these photos, so they suit me -- and I got the lot of them for about £1.50. And I can always actually play Cluedo if the urge ever strikes me.

Anyway, I hope that's useful.
Posted by James Holloway at 06:08