So, as I mentioned back in August, I went to Bring Out Your Lead 2015, the weekend-long event organised by the Oldhammer community. In fact, I was one of the last to leave, because I was sharing a cab with Captain Crooks and he was waiting for Citadel founder and former GW supremo Bryan Ansell to finish sculpting a hand on a model for him. This meant we just got to hang out and chat with Bryan and Tony Ackland, which was pretty cool. Bryan showed us some unreleased sci-fi models Foundry had produced -- I don't know anything about who sculpted them or what they're meant to be. We thought they were pretty cool, so he generously gave us a set each and I promised (for what it's worth) that I'd paint them up and blog about them. So here we are!

First, let's look at the models themselves. There are 15 of them, and I suspect they are intended to be in three sets of five. 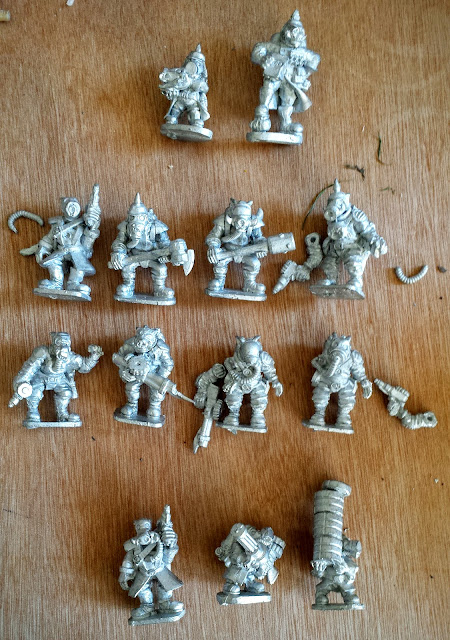 As you can see, they are sort of sci-fi boar- or pig-men wearing uniforms with a hint of 19th-century / WW1 German influence about them. There are both larger individuals and little ones who appear to be some sort of helpers. There are only 13 models in the shot above, because I've already pulled one rifleman and one hammer-guy out for painting, but basically there are three guys with hammers, three guys with rifles, five guys with pistols, a machine gunner, a loader, a commander, and a commander's orderly in total. I suspect this makes a five-man rifle section, a five-man assault section, a three-man MG team, and a commander with sidekick. At least, that's how I've chosen to organise and paint them.

Here are close-ups of the commander and the MG loader: 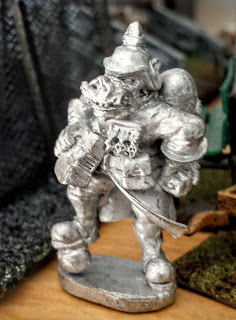 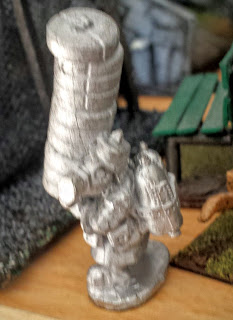 Sorry for the blurry photos, but I think you can see the goofy charm of the models pretty clearly! I really like those little guys.

After cleaning the flash and mould lines off the models, I undercoated them in grey and drybrushed up to white, then applied colour using inks and thinned-down paints. I kept the colour scheme simple, using dark blue for the uniform jackets to reflect the Prussian influence. 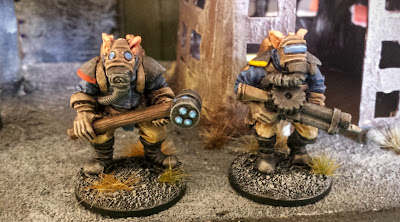 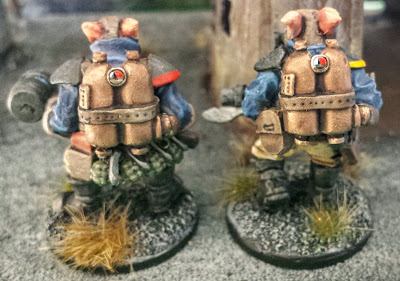 I decided to give each squad an identifying coloured stripe on the edge of the right shoulder pad -- red for the assault squad, yellow for the rifle squad and maybe sky blue for the MG team? -- but I haven't decided what if anything is going to go on the left one yet.

I have vowed to complete the force before BOYL 2016 and maybe even kitbash a vehicle for them. I would ideally like to play a game of Rogue Trader with them for completeness, although I don't know how I would stat them. Given the big-dude/little-dude divide, it seems like they are parallel to Orks, but here's the thing. Check out the size comparison:

As you can see, they are quite a bit larger than the biggest RT Orks, overtopping even the power-armoured Inquisitor. Given that (and the small size of the force) I'd like to make them individually a bit beefier. I guess I'll have to do some tinkering. Or -- and let's be honest, this is the actual truth -- some carefree improvisation.

Anyway, these are models from BOYL, and receiving them as a gift was a wonderful and unexpected cap to a superb and memorable weekend. I should have painted them long before now, but you know how it goes. Hopefully this will serve as an impetus for me to finish off the rest.
Posted by James Holloway at 02:13