So in D&D, confusingly, gorgons are called "Medusas" and the "Gorgon" is a giant metal bull critter, which I believe is based on the brazen bull, a presumably fictional torture and execution device. 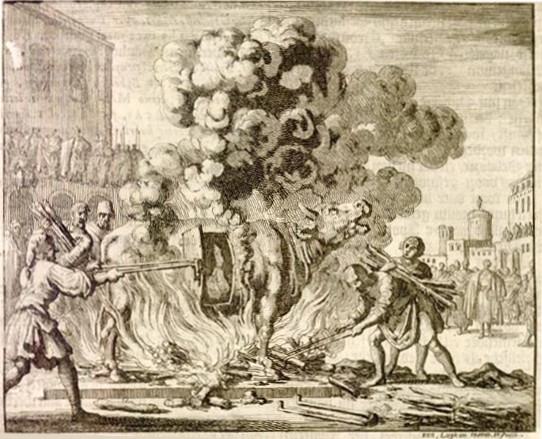 Now, the bull may be associated with the cult of the Carthaginian god Moloch, who a) has a great name, b) is awesome in Paradise Lost, c) already exists in my campaign, and d) gets some extra emotional heft from his appearance in Howl.

That being the case, clearly in my campaign the "Gorgon" is the Sacrifice Engine, a mechanical construct powered by the life energy of humans horribly roasted within it. In 5th ed., its main attack other than just goring and trampling people is its petrifying breath, which obviously doesn't quite fit in with the image, so I'm gonna give it a horrifying scream -- after all, the ancient writers focus on the gruesome sounds the thing made -- which forces characters to save or be frightened. And I might give it a scalding blast of steam as well, although I'd rather it did something cleverer than just do damage. Characters should also be able to get into the hatch on its side and pull out the victim, although presumably at the risk of burning themselves. 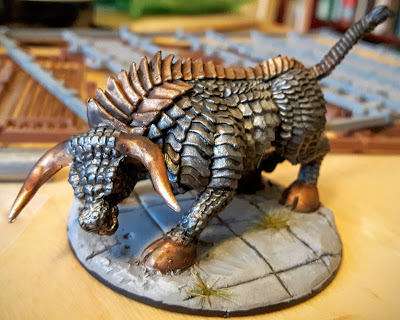 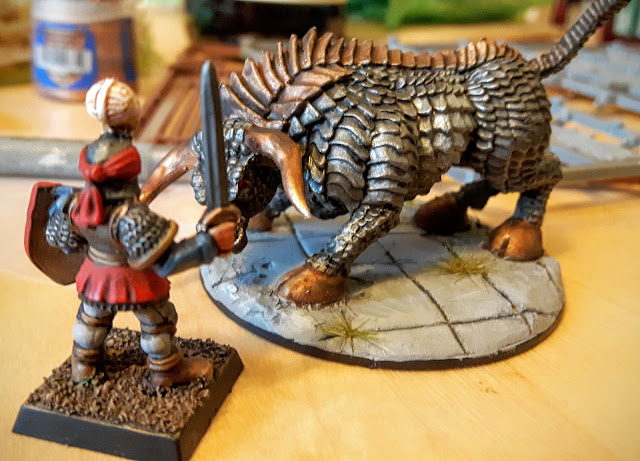 Anyway, the miniature: this Reaper Bones Gorgon was one of the models from the second Kickstarter, and I didn't really care that much about it, but I thought I'd polish it off. I integrated its textured base with some crudely-sculpted flagstones of my own (I suck at sculpting but I'm just doing a bunch of it anyway to build skill and confidence), then primed it grey. Metal paints, slightly lighter metal paints, couple of washes, some bright eyes and the job's a good 'un. I think it looks OK, particularly given that I did not previously give a hoot about this monster. Now I might actually use it, since I have both a mini and a backstory for it.
Posted by James Holloway at 01:04