I post infrequently about my D&D campaign, largely because it usually isn't very visual and I like to make posts that include an image or two. But this recent session was a bit more photogenic than previous ones, so let's have a look.

A quick recap: when last we left our heroes, they were on their way to Eyvind's homeland of Nornrik to help liberate it from the Empire, stopping off on the way to investigate the mystery of Zylphia's family. They did eventually find the Lockwoods, and discovered that they were being manipulated by an alien conspiracy to get hold of a transdimensional artefact, the Worlogog, that contained all of Creation within itself. A big fight with the aliens led to one escaping into the Worlogog itself; our heroes pursued it and emerged in a different dimension -- which is to say a different game. The next session and a half were a game of Call of Cthulhu, with equivalents of our heroes hunting the aliens through 1920s Massachusetts.

After finishing that, they returned through the Worlogog, emerging in Nornrik. Realising that the Worlogog was out of whack, they concluded that since the artefact contained all of Creation, they needed help from someone who had been outside of Creation -- which meant an Abyssal being (unlikely to help), a god (not seen around lately), or a dragon (created before time in the instant when the Creator, er, created Creation). So hey, fortunately Eyvind knew where a dragon could be found, chained to the sky above the Eight Cold Kings range of northern Nornrik. They bandied words with the dragon, who agreed to help if they freed him. Eyvind secretly planned to use the amulet the serpent priest had given him to lure the dragon to Frog Island, but later reflection suggested that was a bad idea.

Aaaaaanyway, they needed some way to free the dragon first, so they tabled the idea to concentrate on the liberation of oppressed Nornrik. Joining forces with Eyvind's overachieving sister Nornvar, they carried out a series of daring raids against the Empire, including staving off an attack on the workshop of Klaus the runesmith: 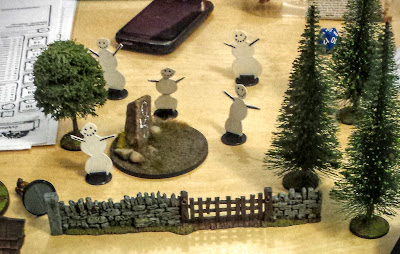 ... and venturing into the ancient tomb of King Bor, where they battled, among others, these guys: 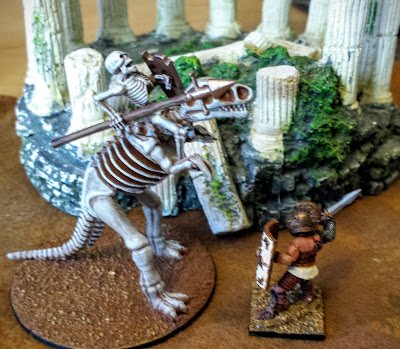 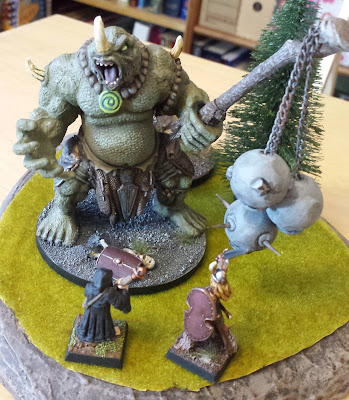 Until they recovered the mystical secret of Bor's legacy. They infiltrated the Immortal Buffalo General's Fortress Golem and encountered both him and his elite bodyguards, the Brides, who included one of Frances' "sisters," Mercy. Defeating them, they hijacked the golem and marched to the relief of the beleaguered Nornic tribes holding out at the fortress of Laxegard. Arriving just in time, they battled the fiercest of the Buffalo's commanders, Lord Tye, in a battle that ended with Tye literally exploding while standing on the head of the Fortress Golem. The explosion nearly killed Zylphia, and in the aftermath of the battle she told the others that she wanted to return to her homeland and get to know the family she'd been separated from for so many years.

Laden with treasures by the High King -- and concerned by sinister new revelations about the mysterious assassins chasing them -- the party picked up a new recruit, tough brawler Caitlyn, and headed back to Frog Island, where they were joyfully welcomed by the followers they'd left behind. They determined that their only real chance of controlling the dragon when it arrived was a set of magical artefacts created by heretic serpent priests and locked deep within heavily-defended temples in the days before the Elves shattered the coldblood civilisation.

So these temples: there was a fight against a guardian beast, a misshapen monstrosity made in the form of a dragon. Ish.


There was also another temple filled with tricks and traps.

And a dramatic undersea battle against a load of fishmen.

Having recovered the artefacts, the party stash them in a safe place and begin planning to seek out the infamous Pirate Queen of the Thousand Isles, who they now believe is corrupted by the Eye of Daoloth, the artefact Frances was mistakenly jailed for stealing back in session one in ... May 2014. Lord.
Posted by James Holloway at 15:54