I have been messing around with bits and pieces of various miniatures, inspired by the idea of a Fallout-style raider group with a Viking theme (like the Great Khans have a Mongol theme). The nice thing about this idea is that they don't have to be historical at all; they should mix apocalyptic and fantasy elements. I dragged out all the spare sprues I had, including a big pile of Wargames Factory Vikings my friend Chris was kind enough to give me after putting together his SAGA army.

Here's what I've got so far: 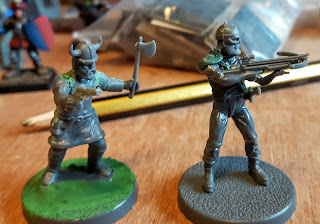 The guy on the left is mostly a Wargames Factory Viking with some bits and pieces from a WWII Russian sprue. The guy on the right is a Wargames Factory apocalypse survivor with a Viking head; the crossbow arms don't fit neatly on the body, so I made a crude shoulder pad and strap for him from green stuff. These sculpted pieces are pretty crude, but these guys are mainly for practice. 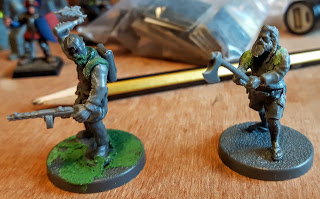 The guy on the left has the body of a Viking, the arms of a Soviet WWII guy, and a backpack and head from an apocalypse survivor. He didn't have much Viking flavour about him apart from the shape of his body armour, so I sculpted a little beard on him. The guy with the axe has the fat-guy body from the apocalypse survivor box, plus the head from a Gripping Beast (?) Viking and the arms and axe from a Wargames Factory Viking.

I have a few more in progress, including one exciting piece I think you guys are gonna enjoy.
Posted by James Holloway at 11:50