As I mentioned in a previous post, I have been helping a pal of mine prepare models for an upcoming megagame. This weekend we tackled the remaining models, which covered a range of different unit types in the game. Probably the biggest job was the rioters.

These 18 models come from Offensive Miniatures. I believe these are the "World Rioters" and "Masked Rioters" sets. One was missing a hand (you can see her at bottom right), so I replaced it with a hand holding a bat from the Wargames Factory apocalypse survivors set, which scaled nicely. 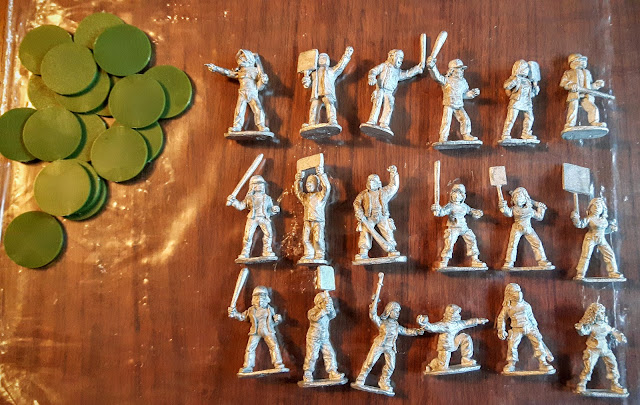 I threw together some test paint schemes: these are primed, then drybrushed up and coloured with washes and thin paints. Each of them took about 10-15 minutes. 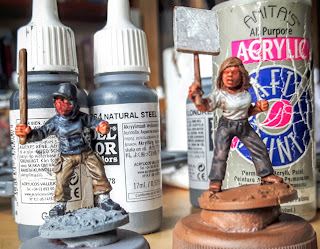 On Friday, Bob and I sat down and just mashed these out. One of them was missing a hand, so I had to finish her on Saturday morning, but basically we got these all done in about four or five hours or so. We kept our paint scheme limited to a few basic colours, and I think it worked.

The paint jobs are simple, but the mob looks pretty good overall, I think. They would make a great addition to any near-future or modern game (or zombie apocalypse or whatever), and they are £22 for 18 figures, which is not half bad.

Next up were some structures for the aliens to build on Earth. These are pieces from a board game, I believe. 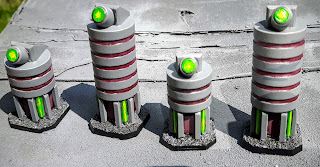 The last item on the list (for me; Bob was slaving away on the alien mothership, which I don't have a photo of) was a load of army units for the various nations in the game. These were just simple playing pieces that had to be given paint jobs in their nations' colours (the same ones used as the markings on the interceptors). 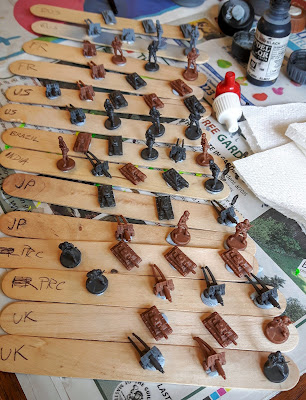 Bob separated them into their factions and I stuck them to popsicle sticks for priming.

A quick two-stage paint job later, they were all ready:

Our main concern was that it might be hard to tell yellow and orange apart, but I think they look quite distinct.

Anyway, there's going to be a lot of fun models in this game. In addition to the ones in this post and last, Bob also created some more alien units that might crop up during play. I think that this all shows that with a little creative nous, you can have a good-looking megagame without having to spend a whole lot of money.
Posted by James Holloway at 01:31