I have talked a bit in the past about Wasteman, the post-apocalyptic game from ThunderChild Miniatures, but although I have read it, I hadn't had the chance to play it until Thursday.

I don't have many actual Wasteman minis painted up yet, but it's pretty straightforward to stat up whatever for the game. It only took a while because it was my first time. I created two posses. One consisted of fierce wasteland bandits:

The next consisted of elite troops from the Lunar Coalition: 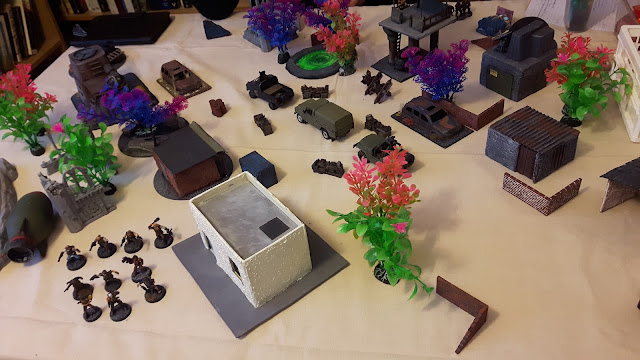 We set up a scenario involving the bandits defending a stalled convoy from the Lunars. Doubtless they had something on there that didn't belong to them.

Things got off to an inauspicious start when a passing giant monster stepped on some of my guys: 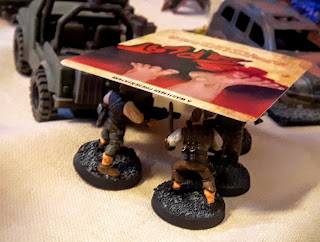 ... but fortunately as it proceeded across the table it then stepped on some of the attackers.

The game itself is fast-paced, knockabout fun, with an alternative activation system and a very simple central combat mechanic. It reminded me a little of Song of Blades and Heroes in its activation system and in its basic few-stats-but-lots-of-special-skills setup. We finished a complete game in two hours, counting setup, and it was our first time. I suspect we could have played start to finish in 90 minutes if we'd had a couple of games under our belts.

The random event cards were something I worried might disrupt the game, but actually I thought they added to the tone and excitement. You build a deck of these things and then draw a hand from it; they may be attacks against the other player, healing for your own guys, rerolls, extra actions, or what have you. Curiously accurate tornadoes kept sweeping models across the board, and at one point or another the leader of each faction was abducted by aliens.

This was a lot of fun and I think that Wasteman is going to go into my go-to skirmish pile alongside games like Frostgrave and Strange Aeons. It's fast-playing, but the factions, despite their mechanical differences being more what you might call guidelines, do feel distinctive. It's easy to adapt other models, but I like the Wasteman models enough that I'm definitely going to expand my collection. Above all, I love the goofy mixture of different genres of trash cinema and TV: it's all very Gamma World but with a bit more of the gross-out sensibility of the 70s.