While I'm talking about D&D stuff, I want to take a moment to review, mainly for my own benefit, what I'm working on at the moment minis-wise, and when I want it done by.

I would like to complete my unreleased John Pickford space orcs by Bring Out Your Lead. I don't have a gaming use for them, but it would be a nice piece of closure. I have five done so far, with another five or six on the table waiting to be primed. 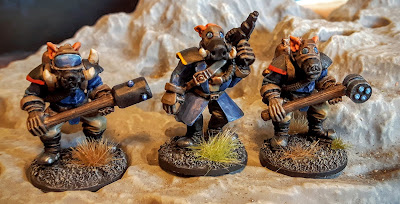 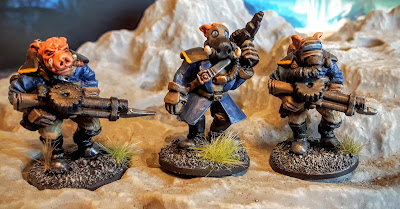 These are the same officer, but I just wanted to show off the two main troop types. I'm going to do the MG team, then finish the rifle and assault squads, then do the commander. If I want to get really ambitious, I will kitbash a vehicle for them, but that seems less and less likely.

I would like to put together a Chaos force for the RT tourney, but I don't know what list to use. This would mainly be a case of rebasing some of my older models, I guess, and maybe dulling down the bright-green paint job of my Predator. I don't know if this is realistic.

I need to finish my Orks for BOYL as well. This currently means painting one base of snotlings and one Gretchin, so that should be OK. I could do quite a bit more, but I don't know if I'll have time. 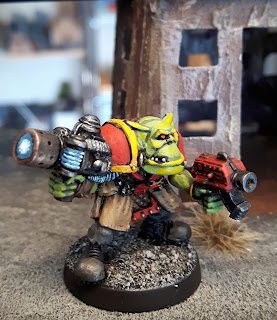 So that's what I'm hoping to get done by the end of August. Then I need to get moving on some more Wasteman models, some Frostgrave stuff, and my long-stalled SAGA Normans. So ... it's quite a bit, especially since I'm sure I'll come back from BOYL with some new models. Still, I'm making this list so I have something to hold myself to; I'll update as the month progresses.
Posted by James Holloway at 04:46