The Magonium Mine Murders: Location descriptions

So in a previous post about the development of The Magonium Mine Murders, I said that I would add some location descriptions in my next post. Here are a couple of samples.

Although it's meant to be a loosey-goosey adventure sandbox, a big part of The Magonium Mine Murders, as the name implies, is a whodunit, so most of the location descriptions are about clues. Here are a few sample locations. They're still in progress, but I don't think it'll be hard to tell which bits are incomplete. 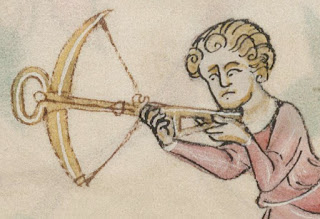 Elsewhere in the mining camp itself ...

Around 120 people work in the mining camp: 40 miners, 50 slaves, about 20 guards and 10 various camp administrators.

Offices of the murdered administrator, Alba, as well as her assistant Bellows, alchemist Rogin Hyland, security chief Lumicent Pulver and head engineer Simvesh Threen. All have keys to the building. Apart from Bellows, they do most of their work around the camp and are seldom present (1 in 6 during work hours). Two guards stand at the door, a new security precaution added by Bellows.

Wooden bunkhouse, usually occupied by 2d6+1 miners napping or socialising. Many hide valuables in spaces under the floorboards. TREASURE STUFF.

Does that all seem clear enough? Each number corresponds to a location on the map, and there may be little breakout sketchmaps of e.g. the crime scene.

Email ThisBlogThis!Share to TwitterShare to FacebookShare to Pinterest
Labels: D&D, The Magonium Mine Murders., thinking out loud