Age of Sigmar challenge: The Chosen of Chaos

Hey, it's about time for another update in my ongoing slow-build Age of Sigmar challenge with Tim of The Responsible One's Wargaming Blog! He's got a recent post on finding alternative models for the unit of 10 Chaos Warriors he's fielding as part of his army. I have a similar issue on my mind this month, although I have only five Chosen to field. Chosen are basically elite Warriors armed with heavy two-handed weapons. I didn't have any good models lying around to represent them, so I looked about for a budget alternative. I had recently sold some models, which meant I had a few quid earmarked for minis spending.

I settled on some models originally sculpted by Mark Copplestone for Grenadier but now available through Forlorn Hope Games. These are "medieval foot knights" or maybe "evil knights," and I've always liked the sculpts. I got four of them to go with a champion I already had on hand.

The champion is a bit of an odd figure. He's an unreleased Citadel model -- Foundry, who recently put him back into production for BOYL 2016, call him a wizard, but that's obviously not the case. He's a medieval Russian type, maybe a proto-Kislevite? That's not important for my purpose; he has a suitably wicked-looking axe. I took advantage of Kev Adams' charity sculpting fundraiser to get a new face sculpted on him. I just asked for a leering, demonic face, and I wasn't disappointed. I like the idea that this is a sort of samurai mask, but given how I eventually painted it it looks a little more organic. Perhaps it's a chaos gift; who knows?. He's a little different from the rest of the unit, but then he is the champion, and the backstory is sufficiently cool that I don't want to leave him out. 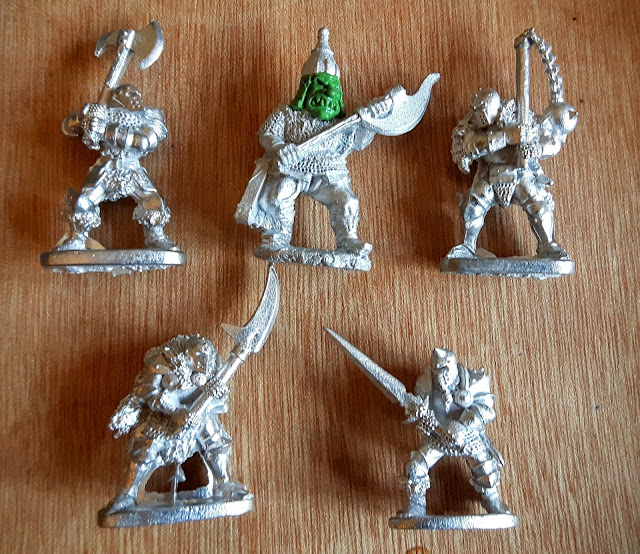 Now, as you can see from the photo, the Forlorn Hope models took a bit of work to clean up. They're new casts from presumably quite old moulds, and there was a fair amount of flash. They're also ever so slightly smaller than their champion, but I guess he is a champion after all.

I mounted them on old-fashioned 25mm slottabases to help add bulk and stature compared to the Marauders, who are on flat bases. I wanted to keep their colour scheme stark and simple, so I gave them black armour and grey-white cloaks with natural accents and the occasional bit of livid green. As usual, I primed them grey, then I washed the armour with a mix of Army Painter Dark Tone and Black Paint to give it a bit of shade; I then highlighted armour edges and so on with VMC German Grey and then the same colour mixed with VMC London Grey. I washed the blades of the weapons with a mix of black and green ink to give it a slightly odd tint, but they're pretty simple paint jobs.

Here are the champion and a member of the unit; I have a few weeks to get the remaining three done. No musician or standard for these guys, although if I expand the unit up to 10 they will get them. 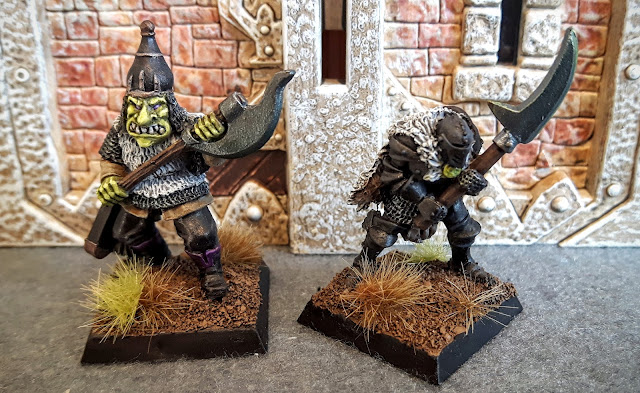 I suppose he looks rather goblin-y or hobgoblin-y, particularly with the vest, but eh. I like the model enough that I'm going to use him, even if he is a leeetle incongruous. Perhaps something else will suggest itself, but he will do very well for now.

Anyway, I think I'm steadily on track for month two. I think for October I may just shoot for the Chimera and defer the problem of finding some Chaos Knights until November.
Posted by James Holloway at 01:09

Email ThisBlogThis!Share to TwitterShare to FacebookShare to Pinterest
Labels: Age of Sigmar, Oldhammer