As I have mentioned, I'm doing an Age of Sigmar slow-build project using the "matched play" points rules presented in the General's Handbook. Together with Tim of The Responsible One's Wargaming Blog, I'm trying to complete a 1,000-point force by the end of the year, which means 200 points a month. This month, my 200 points are a sorcerer (100 points), two familiars (40 points) and a unit of 10 Marauders (60 points).

And here they are: 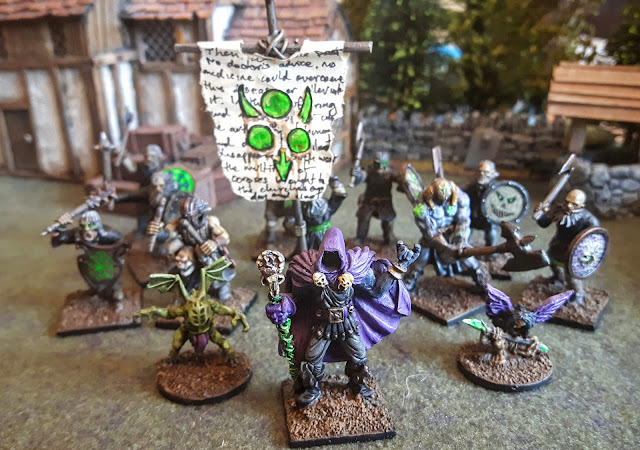 When the plague struck the city, none were spared. The wise died with the foolish, the brave with the cowardly, the poor alongside the rich. Scheltorius was the most learned of physicians and astronomers, but no medicine could prevail against the illness. When his colleagues sickened and died, he applied all the teachings of physic, but to no avail. When his love, the fair Clorinda, began to cough and spit blood, he poured out his fortune to the temples of Sigmar, but no help came. When his children took sick, he sought spells and incantations in forgotten tomes, but they were powerless. But when he himself began to show signs of the disease, then in desperation he called upon the forbidden name of Nurgle. And this time, his prayer was answered.

For his devotion, the plague lord gave Scheltorius his life -- but for his cowardice he gave him life imprisoned in a hideous fleshless form, a cruel mockery of his former self. Chastened by his master's lesson, the sage devoted himself to the unclean one. Now, as a sorcerer of Chaos, he leads a band of wretched survivors on his lord's work.

Speaking of wretched survivors, here are that first unit of Marauders: 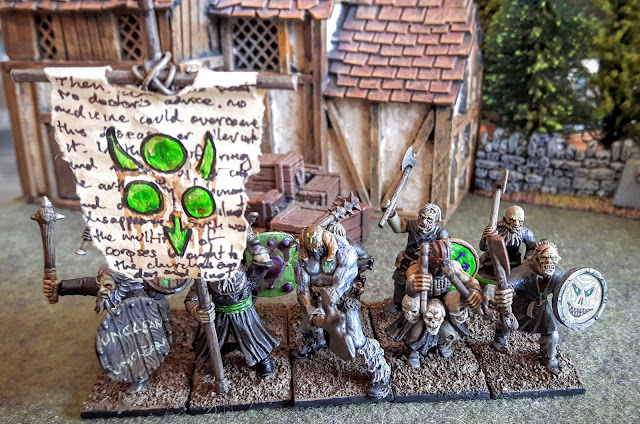 They're a mix of GW Flagellants, zombies (Mantic?), GW Mordheim militia, Frostgrave cultists, Gripping Beast Dark Age warriors, Wargames Factory vikings and a Reaper Bones barbarian. The standard is a mix of quotes from Boccaccio's description of the plague in Florence on some aged paper, with a stylised Nurgle rune. They're going to get their muddy bases tufted up a little, but otherwise they are all done. They represent plague survivors maddened by their experience into the worship of Nurgle, led by the kind of guy who aspires to be a Warrior of Chaos.

Next month I'm doing another infantry unit, but this one is smaller: a five-man unit of Chosen, who are Chaos Warriors armed with two-handed weapons. I have the models picked out, so this should be a nice easy one compared to August, which is good news, seeing as it's the start of the school year again.
Posted by James Holloway at 00:56