I found myself, for reasons too complex to explain here, with some money that I was honour-bound only to spend on miniatures. And then, as if by some cosmic convergence, ThunderChild Miniatures released some models I had been looking forward to. I sent off the order over the weekend and by Wednesday they were here: 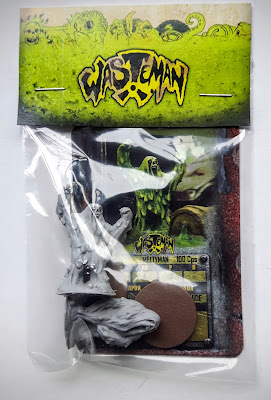 These are Meltymen, for the game Wasteman. I don't know what their backstory is, but in my mind they are people who fell into the toxic ooze that occurs here and there in the post-apocalyptic landscape and, while their flesh dissolved, their consciousness imbued the muck and gave it a semblance of life, sort of like the Swamp Thing in a brighter colour scheme.

You get two resin models in the pack, together with 25mm round bases and stat cards for the game. I cleaned up the models (although they're quite textured sculpts, and as a result I missed some bits. Still, I don't think they're noticeable), stuck 'em on their bases and textured around the integral bases. Normally I put sand over integral bases, but these are sculpted as puddles of goo, which I thought was quite cool and wanted to leave on. 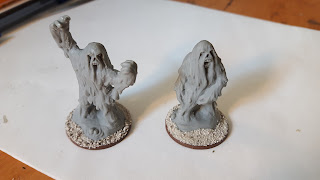 I primed them grey and drybrushed up to white, as is my wont. I then washed the eye pits and facial detail in black. Once that dried, I gave the figures a wash of green wash mixed with acrylic medium and cheapo fluorescent green craft paint. I wanted them to look a little different from each other, so for one of them I added a little yellow ink to the mix.

I then highlighted both up, first with fluorescent green, then with VMC Yellow Green, and finally with cheapo craft paint fluorescent yellow, went back and picked out the eyes in pure yellow and dotted in the teeth. I think they look OK, although overall I'm happier with the lighter one. 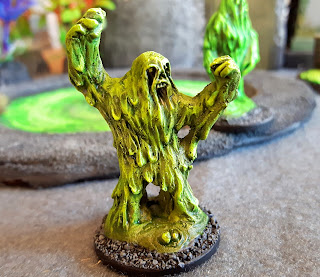 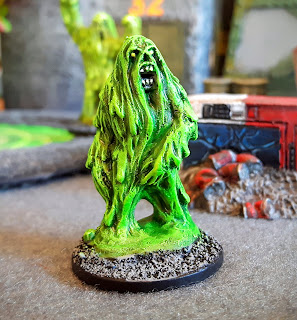 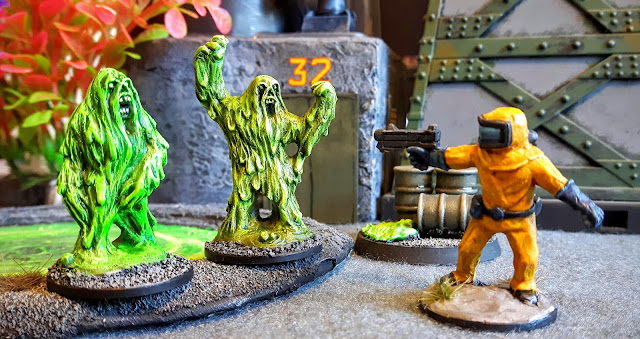 I like Wasteman, but I understand that some people have concerns with the height of the models, which are rather taller than most figures. In this case, though, it doesn't matter -- how tall is a goo monster? I certainly intend to use them for my Wasteman game next month, but they could also be monsters in my D&D campaign or a Strange Aeons game.
Posted by James Holloway at 01:00