Having unique miniatures for enemies in your D&D game is very cool. But spending a lot of time and money on characters who are only going to appear once or twice is not practical! How to solve this problem? Frugal gaming, of course!

These bad boys represent some, er, bad boys, in this week's session of my D&D campaign. The players went looking for the notorious Pirate Queen of the Thousand Isles but ran into some villains with a certain ... theme. 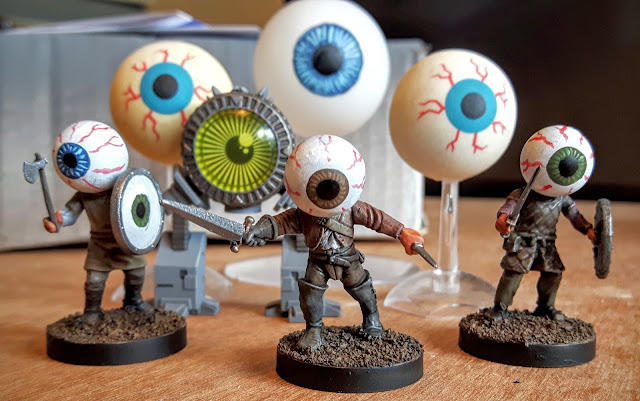 These models represent various sort of tiers within the enemy force. The hapless humans who have fallen under its control have giant eyeball heads and come from a variety of sources, including some spare Wargames Factory Vikings given to me by my friend Kit and a Mordheim militia figure I've had lying around since I started to put together my WHFB Empire army in liiiiiike 2001 to 2002. There are more in the pipeline, including one based on an old plastic Dark Elf missing his head. The spheres used to make the heads are the projectiles that came with the little robots I bought a few posts ago. I kept them around because, well, you never know.

Speaking of Teutans, the eye walker thing is one of them; I think it'll make a good shrine or altar for this group.

The medium-sized eyes are bouncy balls that came in a pack of Halloween toys for 99p many years ago. I have more, but some are too yellowed by age to look good. I mounted them on cheapo flying bases from em-4 miniatures.

The big eye is a ping-pong ball from a pack of them I got at Poundland mounted on a later-style Citadel flying base.

The paint jobs on the zombies are a bit basic, but again, that's part of the idea -- if I thought I had to spend a lot of time on these guys who are only going to be in the game for a little while, I'd never do this kind of thing -- or worse, I'd railroad my players so that I knew where they were going to be months in advance.

Here is a shot of our heroes in action against two eye-guys, a smaller floating eye and their scurvy pirate thralls. Kaia is in the form of a giant frog. 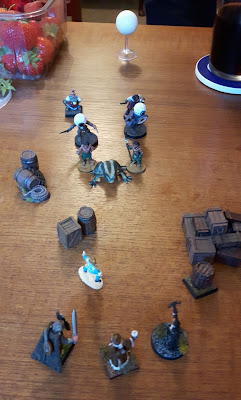 Next session, they may run into the enemy leader: can you guess what it is?
Posted by James Holloway at 00:49