So today's prompt is "most memorable encounter." For me, as a player, I don't think that I necessarily think of my favourite gaming memories in "encounter" terms -- if a traditional tabletop game is going on, like as not I'm running it, and the kind of social live play I really enjoy isn't really "encounter"-y. And older games tend to fade a bit for me so that I can't really remember the precise details of an encounter. I remember laughing like mad during Luke's WHFRP game, but I'm not sure I could put my finger on any one encounter.

So anyway, here are two of my favourites from games I've run -- not the best, not the best-run or best-designed, just two that spring to mind at the moment.

The first is a recent scrap from my D&D game. I don't think this was actually my favourite encounter from this scenario, but it does have a photograph that illustrates the chaotic nature of an interesting fight. Here we see the PCs locked in titanic struggle against the mysterious mole men and their earth elemental minions. I wanted to create a sense of the multiple levels in the cavern, so I set up some rudimentary terrain. 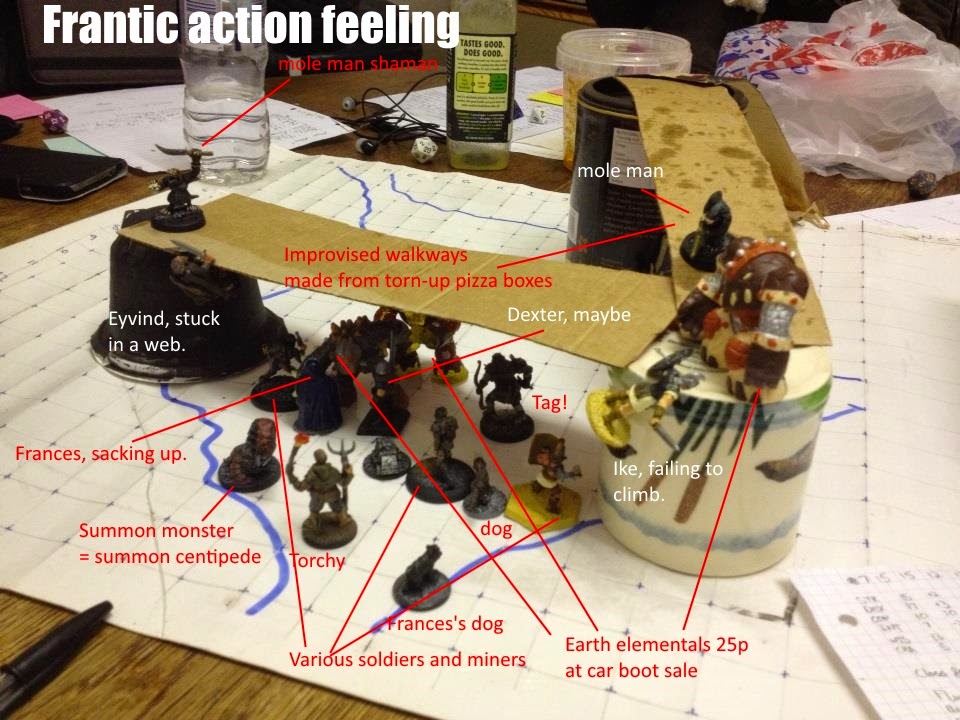 The title is a reference to an old interview about the game Serious Sam, but I like the phrase as a way to think about a good combat scene. The mental soundtrack of a good fight should be "ohshitohshitohshitohshit," which I think was pretty much how this one went. Plus I liked roleplaying the Mole Men; I got to say things like "you are lying! All surface-dwellers are alike" in a hissy monster voice.

The other one that leaps to mind comes from when friend Jeff and I co-ran the Beyond the Mountains of Madness campaign. Near the end of the campaign, the Investigators were fleeing from a shoggoth, as one does.

Now the shoggoth's task (spoilers for a campaign that came out like 12 years ago, I guess) is not to kill them but to harvest their living brains for use in the Elder Things' botched-up bio-computer. They don't know this, but if they get grabbed it's a quick trip to the flesh-removing pits or whatever for them.

So they're running like hell, and as the creature gets closer and closer things are getting pretty tense. And finally one of the players, already looking a bit guilty, says "OK, I'm gonna trip him." So his character trips up the guy fleeing next to him. Or maybe he just naturally tripped up and the other didn't help him? I cannot recall. Anyway, the shoggoth swarms over the fallen explorer, the other guy scrambles to safety, and that's that. Except ...

The guy playing the betrayed character -- and I will always admire him for this -- decides that just because he's been glomped by this ancient protoplasm doesn't mean it's over. Instead, he goes to town roleplaying the process of having his nervous system removed from his still-living flesh, sitting there and wailing in terror and agony: "oh God, it's eating me alive! I'm not dead! No! No! Why did you do it? WHYYYYY?!"

The surviving player sat through it, just getting paler and paler. His character got back to base camp, completed whatever it was his mission had been, made sure everyone else was going to get out of Antarctica safely, then took off his parka, walked out into the snow and was never seen again.

Personally, I found it very satisfying.