Sometimes I think I am just making video for the sake of making it, but today we have a visual question! Let's take a look at the coolest-looking gaming products I own. I am a pretty utilitarian gamers, so I don't have too many fancy games; this is pretty simple stuff.

You can get Hell 4 Leather from Prince of Darkness Games.

Wayne Barlowe's books are stupidly expensive on Amazon, but if you see one at a reasonable price you should grab it. They are pretty cool. You may know Barlowe as the artist who did a lot of work on the kaiju in Pacific Rim.

I mention Underground, which was published my Mayfair Games. A friend of mine had this in high school, and it was ... interesting. I don't think I was too impressed by this at the time, but I've come to appreciate it in context. I think at the time the flaws in the execution (and a certain amount of trying too hard from the game) put me off. 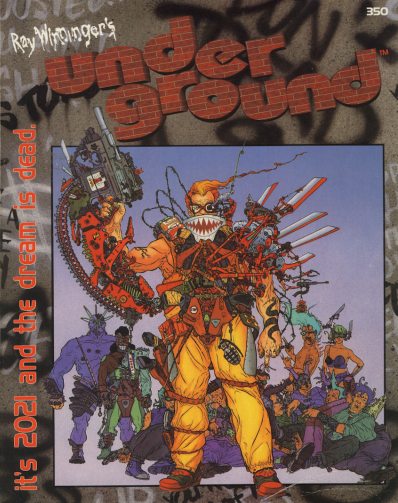 It's a game about being genetically-modified and cybernetically-enhanced supersoldiers who are trained to believe that you're superheroes. When the war ends, though, you're just dumped on the streets of a comically grim American dystopia and left to make your own way. It was in full colour when that was pretty rare, and it had lots of neat visual features: the page borders were colour-coded to tell you what section of the book you were in, for instance, and there were all sorts of materials like a newspaper full of stories and images from the setting and a campaign notebook that was an actual binder you could add stuff to. Unfortunately, I don't think the execution was really there in every case, and the system, which if I recall correctly was a variant on the old DC Heroes system, was a dog from hell. It had art from all sorts of people including Geoff Darrow and Peter Chung. Gotta love that Darrow cover. Someone called it Marshal Law, the RPG, which I don't think is quite right, but it should give you a taste of the aesthetic, anyway. I acquired pretty much the whole line in the early 2000s, but I got rid of it when I moved because the chance of my ever taking the time to convert it from a system that wasn't a migraine factory was 0.0%. These days I think I would find that process a lot easier.

You can still get it, quite cheaply, either in print from Paizo or in PDF from DTRPG, so that's cool. It doesn't look like Paizo has the core rules, but they do have the superb Ways and Means Washington D.C. supplement by Robin Laws.

Email ThisBlogThis!Share to TwitterShare to FacebookShare to Pinterest
Labels: #RPGaDAY, art, Call of Cthulhu, D and D, games that are good, RPGs, Underground