It's a sad fact that historical buildings often aren't really interesting enough for use in roleplaying games. They're seldom really complicated enough until you start to get into the modern day. "Seldom," not "never," and we're definitely going to be seeing some of those exceptions on this blog.

But for right now I want to focus on something that's not actually historical, but has all the good features of history while still being simple to understand and quick to use enough for gaming. And that something is Estalia.

I do not know how to do Estalia justice. This fictional nation was the creation of the late Wyatt James, who seems to have loved castles -- he had a site about British castles which appears no longer to be up. But James had another hobby, which was painstakingly designing fictitious castles, manor houses and fortifications, complete with floorplans, elevations and histories, which he wrote up under the excellent pseudonym "Grobius Shortling." Here's just one example:

And what's better yet about them is that their histories have been incorporated -- like, you get medieval buildings that have subsequently had all sorts of modern features added, very much like what you get in real life. These things are amazing resources for games of all kinds -- and not just for D&D and its heirs, although I certainly downloaded one of them, erased all the room names and used it as my first location in my own campaign. But these could also function as remote country houses in a Call of Cthulhu or Trail of Cthulhu game, an elder vampire's haven ... all that kind of thing.

Check 'em out, download a few, and keep them in your hip pocket for a game emergency.
Posted by James Holloway at 11:23 No comments:

Gamers like weapons, and gamers like mashups. It's surprising, therefore, that you don't see a lot of combination weapons in RPGs or wargames. I think it may be because most fantasy games take their inspiration from medieval settings and combination weapons, which include both a hand-to-hand weapon of some kind and a firearm, are really a Renaissance phenomenon.

Let me show you the kind of thing I'm talking about. These two examples are from Poland, where pistol/axes seem to have survived particularly late as cavalry weapons. I guess the idea is that you do that one-shot charge thing that 17th-century cavalry were so fond of, then shift your grip down to the handle of the axe and start busting heads. The first one in particular seems like a pretty robust piece. 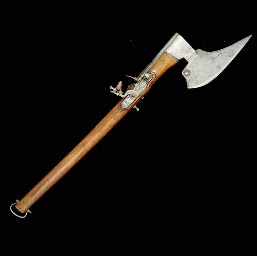 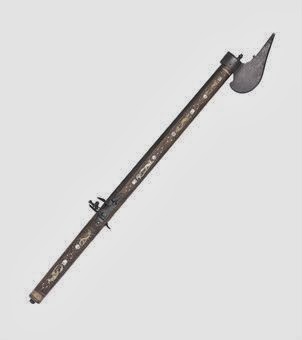 I think it wouldn't be hard to get gamers hyped for this type of thing -- in particular, I can see it as something that you'd see in WHFRP, either as just a particular local specialty or as the kooky invention of some weirdo. Of course, mechanically in WHFRP (2nd ed, anyway) hand weapons aren't distinguished, so there's not much point. Still ...

Anyway, most combination weapons, as far as I can tell, are not like this. They're more like wealthy people's playthings. Take a look at this example from the Tower of London. 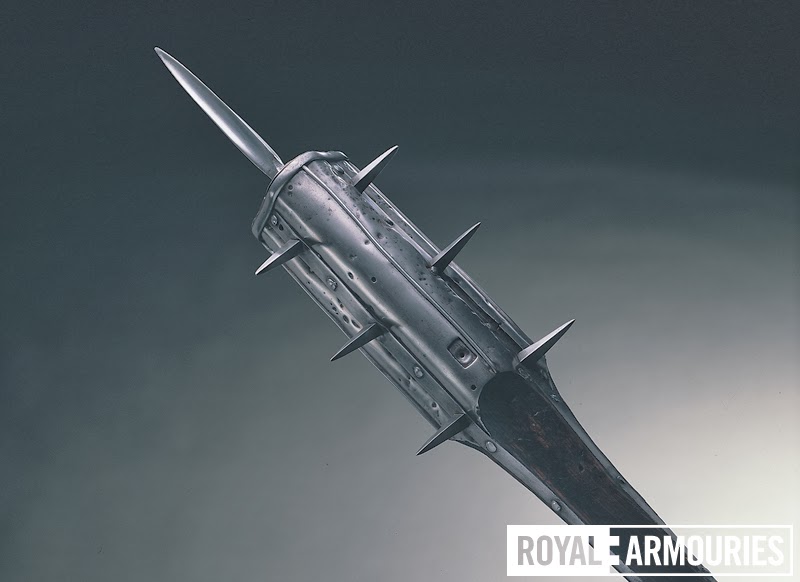 This is an example of a charmingly brutal Renaissance polearm called a "holy water sprinkler," and for added comedy value it's got three pistols built into it, the idea being, I guess, that if you really don't like somebody you can shoot 'em three times, stab them with the pointy bit, and then bash them round the head with the mace part. It's known as "Henry VIII's walking-staff," which is pretty good. But somehow it seems kind of impractical, or at least impractically expensive. It's not clear what advantages it really has over a plain head-beating club and a couple of pistols.

I do like the idea of weapons designed along these principles -- or, heck, not even weapons, anything. An old D&D joke is "a wizard did it," but I think "a rich idiot did it" is equally plausible. I know my players have recently spent a lot of time looting the homes of rich idiots, and I do sort of like the idea of giving them some comically implausible weapon that's so valuable they can't pass it up but so distinctive they can hardly fence it: "oh yeah, it's a halberd, but it's got, like, a crossbow built into it and then when you push this button knives pop out...".

Likewise, I can legitimately see characters wanting one of these gun-shield things. People used to think these were just another armourer's fancy, but there is some new thinking that suggests they were actually used -- the examples in the V&A, for instance, have some powder burns and stuff, so they must have at least been test-fired. 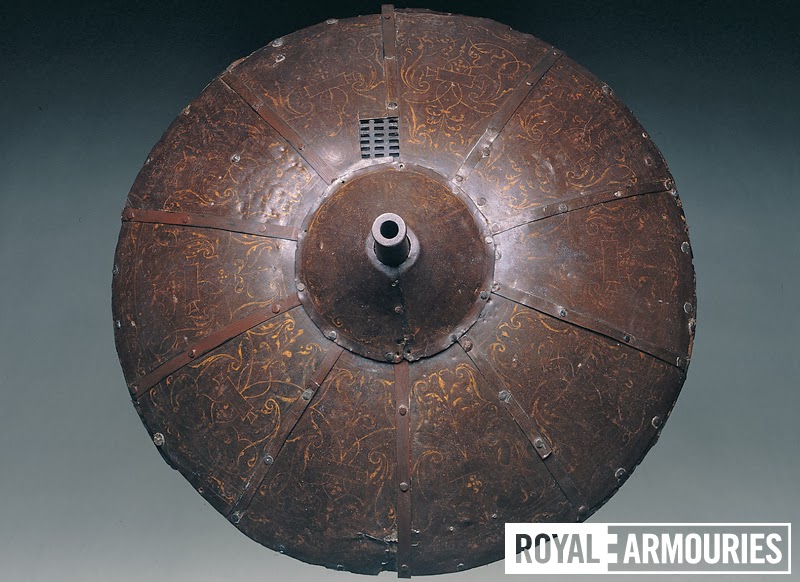 Some of them were probably intended for naval use, the idea being that you run up to the gunwale, slot the shield over it, and bang away, which I guess is fair enough. Others were probably for hand use, which is less practical-seeming. Might have been hard to aim. I can definitely see this in the hands of a WHFRP character. 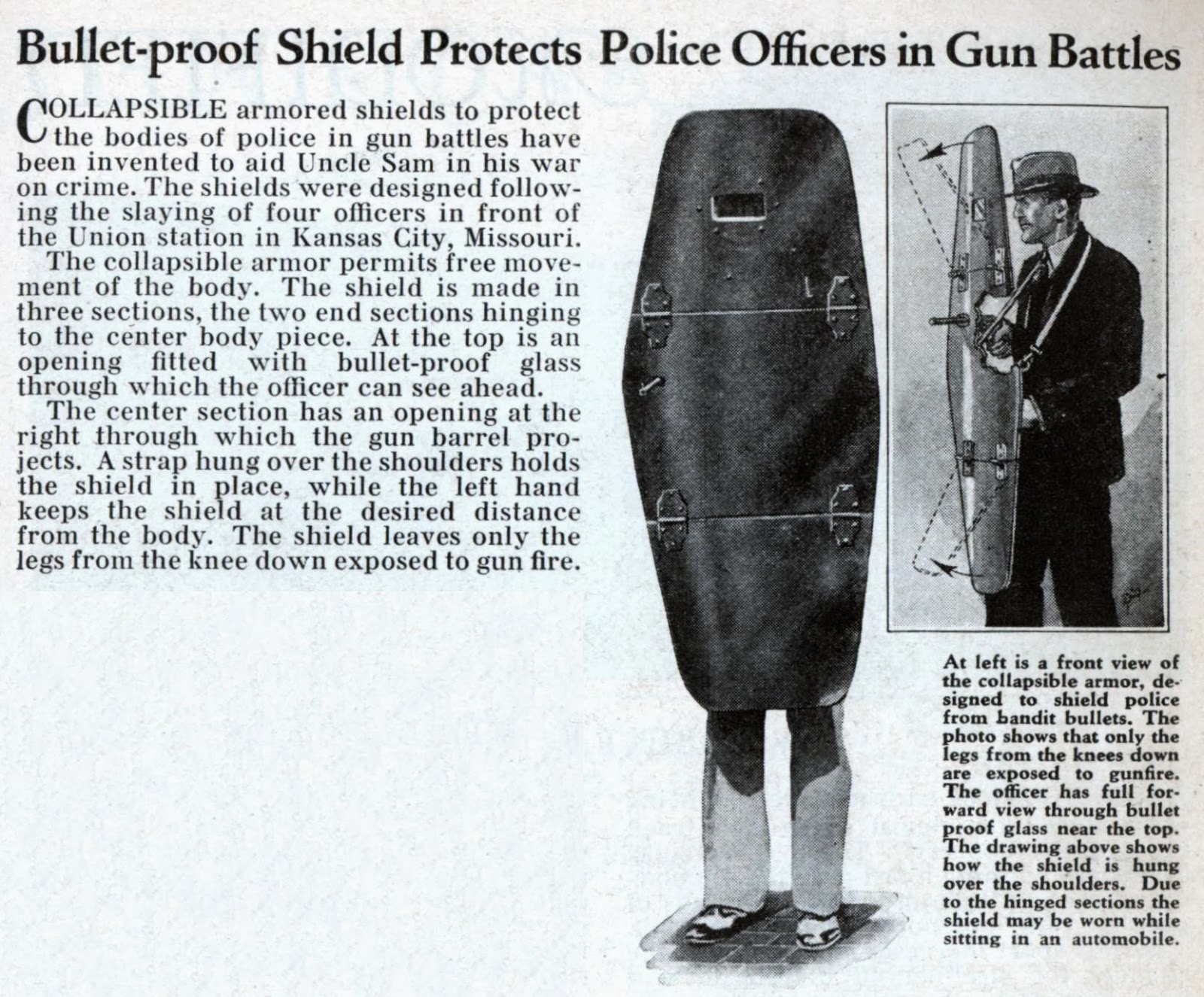 If you look at the modern version of this, of course, you can see the problem -- once you have relatively modern technology, there's not much point in having a gun-shield rather than a gun and a shield if you happen to want it. But more broadly, I think these combination weapons are actually really well-suited for gaming because they have all the problems that games typically don't account for -- clumsy, unwieldy, a pain in the ass to carry everywhere, and expensive.

I suppose if you're really committed to the idea of emphasising the clumsiness and so on, you could do it Paranoia-style, and have the PCs be issued a bunch of clumsy, malfunctioning combo-weapons by some head-in-the-clouds R&D jagoff. "Hey guys, we've attached a chainsaw to this plasma generator. Now you have a mixture of close-combat utility and ranged firepower."

Obviously, that isn't a joke in all games.

Email ThisBlogThis!Share to TwitterShare to FacebookShare to Pinterest
Labels: armoury, combination weapons, D&D, weapons, WHFRP
Welcome! I've started this blog as a spinoff from my history blog, which you can read here. I find that a lot of the history I read or study has game-relevant elements, but I don't want to bore the non-gamers in my audience with it, or the gamers with non-gaming stuff. So here we are!

I play a lot of different games, so you'll find that the things I write about tend to be related to the things I'm currently obsessed with playing. At the moment, that means old-school D&D, World of Darkness, Stars Without Number, and various miniatures games. I can also never shake the influence of Call of Cthulhu and Unknown Armies, two games I love a lot.

This isn't meant to be a very organised blog -- it's just a collection of things I find interesting.
Posted by James Holloway at 12:53 No comments: