This old D&D character model was my third painted figure over the holidays, painted on the 27th. She'd been sitting on my painting table for weeks. She's one of that very generous gift of old models I received from a friend. 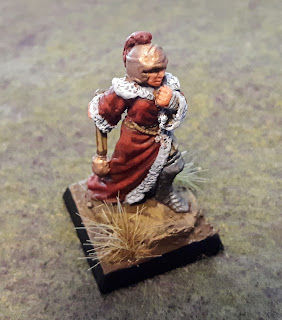 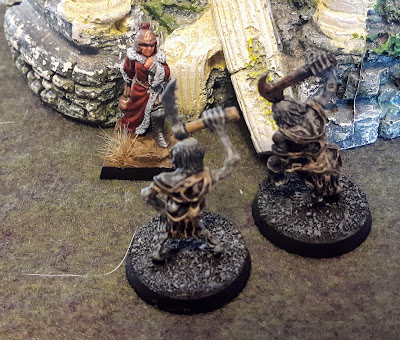 The Grenadier models are very small compared to more recent figures, but they have a lot that I like, and one of my favourite things about them is the variety of female characters. I swapped away a few of the male adventurers, but I kept pretty much all of the women.

This is just a quick paint job, and the helmet and face could do with a little more detailing, but she'll do. In honour of the holidays, I painted her robe and fur trim in Yuletide colours.
Posted by James Holloway at 02:49 No comments: 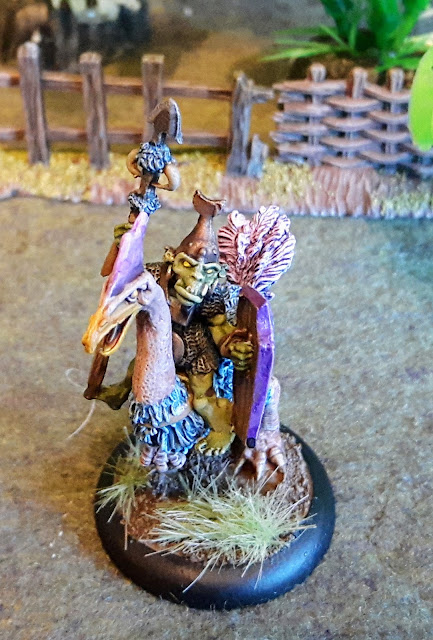 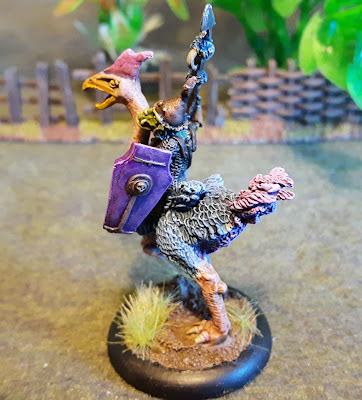 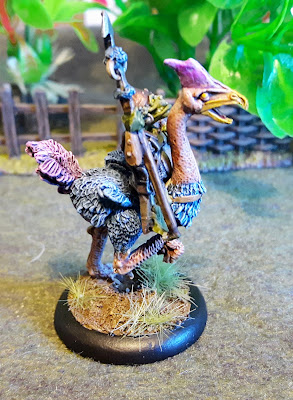 This model took two sessions; I did the colours of the mount on Christmas day itself nad the rider on Boxing Day. It could do with a smidge more detail, but I'm satisfied overall.
Posted by James Holloway at 02:33 No comments:

I did not do much painting during December. Indeed, I don't think I finished anything at all. I wasn't well, work was very stressful, other commitments were more important and, in general, my mojo was missing.

So when the holidays rolled around and I had a couple of days off, I decided to do some painting. And even though it looked as though my challenge with Tim of The Responsible One's Wargaming Blog was going to be a write-off for the second month in a row, I decided that I wasn't going to paint anything I felt I should paint. Instead, I was just going to paint as the spirit moved me. And the result was ... well, I'm pretty pleased.

My Christmas day painting was this Titanotron from ThunderChild Miniatures. It's a big chunky model that I picked up as a birthday treat for myself. I took him from bare metal to pretty much done over a relaxing Christmas. 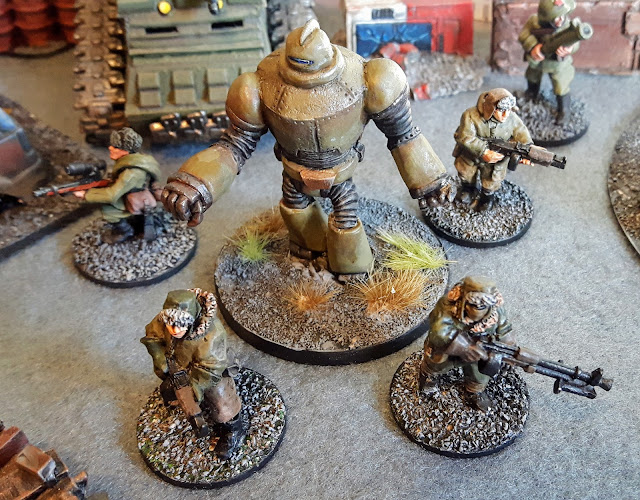 I am going to use him not only in games of Wasteman but also as an Imperial Battle Droid in Rogue Trader, swinging two power fists and with a head-mounted plasma gun to represent the eye beams. Pew pew pew! Here he accompanies a patrol of Copplestone Castings Neo-Soviets through the post-apocalyptic ruins.

The base colour is Vallejo Russian Uniform, and the rest of it is just washes and weathering. It's a simple paintjob and I might punch it up with some inspirational slogans or decals or whatever, but I'm happy to field it the way it is at the moment.
Posted by James Holloway at 15:12 3 comments:

So it seems to be an annual tradition in my D&D game that I run a holiday special, complete with a goofy Doctor-Seuss-ish poem and some seasonal themes. Last year our heroes got into a flying-sleigh-fight with a bad guy who wanted to prevent presents from getting to good boys and girls, and also battled a squad of snow golems (snolems for short).

This time there were Christmas treants hung with alchemical globes, each of which produced a different effect. And it's not over yet. 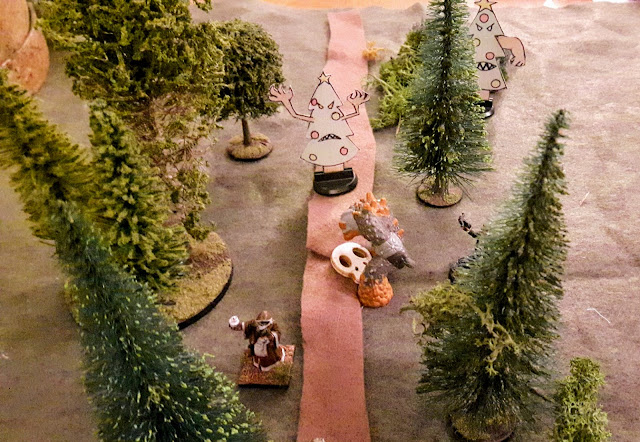 Here, Kaia, in rock elemental form, digs a hole while angry Christmas treants approach. Frances casts spells and Reginald skulks among the trees. Zylphia is just outside the bottom of the shot, hacking one up with a sword.

Posted by James Holloway at 12:49 No comments:

Age of Sigmar challenge: not going so great

So my challenge with Tim of The Responsible One's Wargaming Blog came something of a cropper in November. In short ... I basically didn't paint anything and am now a month behind. I still have to finish five Chaos Knights, and now to that I have to add ten Marauders and a Chaos Lord on a demonic steed. I may have to try to finish by the end of January rather than December to take full advantage of the school holiday (work has been nuts).

However, I have not been completely idle. I have done the following things: 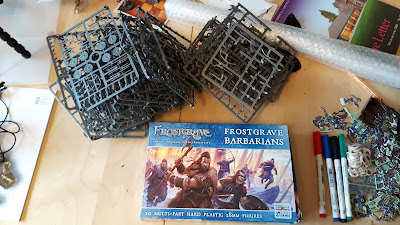 Acquired this box of Frostgrave barbarians with which to make the remaining Marauders (combined with all the miscellaneous sprues you see next to them)! 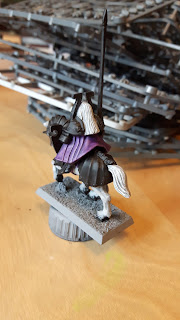 Painted most of this prototype Chaos knight to test the paint scheme!

It's not much, but it's more than nothing.
Posted by James Holloway at 05:41 No comments:

Email ThisBlogThis!Share to TwitterShare to FacebookShare to Pinterest
Labels: Age of Sigmar, painting

Road to Heaven: A new game by a cool dude

So last weekend I was at Dragonmeet, of which more anon. But also there was my friend Stephen Fleetwood, who is Kickstarting his new game, The Road to Heaven! It's a FATE-based fantasy RPG set in a Bronze Age-influenced setting where humans have the potential to become gods, and it looks like a lot of fun. I have backed it myself and am already receiving requests to run it. You can check out the Kickstarter here. 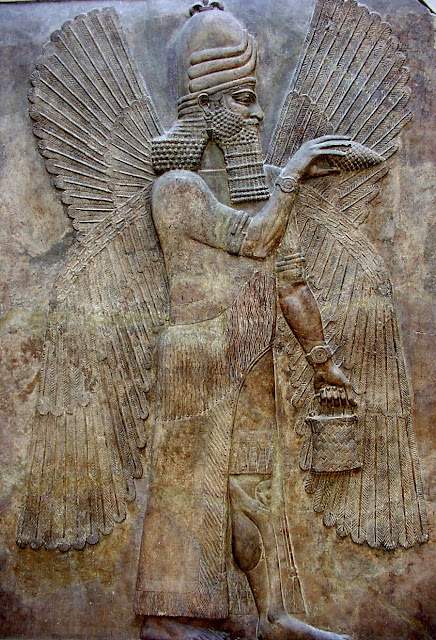 Posted by James Holloway at 06:17 No comments: