The other day I had one of those ideas that comes to you as though in a dream: an idea for how to bulk up my year's painting total, provide a team for anyone who wants to play Stargrave with me but doesn't have models, and test some techniques in the process. It preyed on me all of Monday night, and on Tuesday I got to work. By Saturday morning I had this: 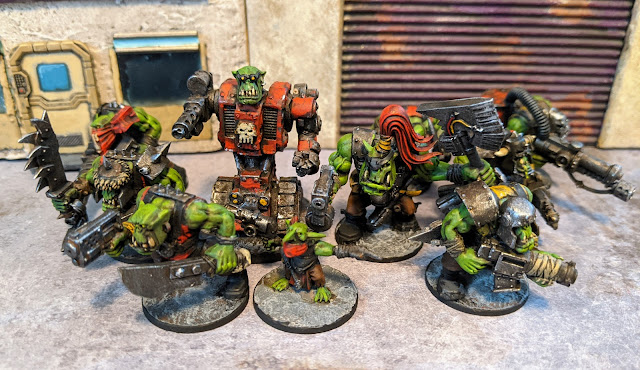 If you are a British gamer, I think you have some Space Marines. You may never have played Warhammer 40,000 in your life, but you'll have some. I think they grow in cardboard boxes or someone puts them through the letterbox. Only marginally rarer are the multi-part plastic Orks from ... Assault on Black Reach, I think? Anyway, I have a few, plus some other Ork kits, in a big tackle box, and I'm never going to use them because they don't blend well with my Ork army, which is in an older style. So I put some together, with some spare parts from the bits box (mostly Ramshackle Games stuff). This was actually a pretty long process -- about two to three hours. I mounted them on plastic bases from Renedra and textured their bases with acrylic modelling paste from Hobbycraft. I primed them with Halford's matt black spray paint and then gave them a zenithal spray with Halford's grey primer. This is a quick and dirty way of creating some shadow and contrast: very important for speed painting. 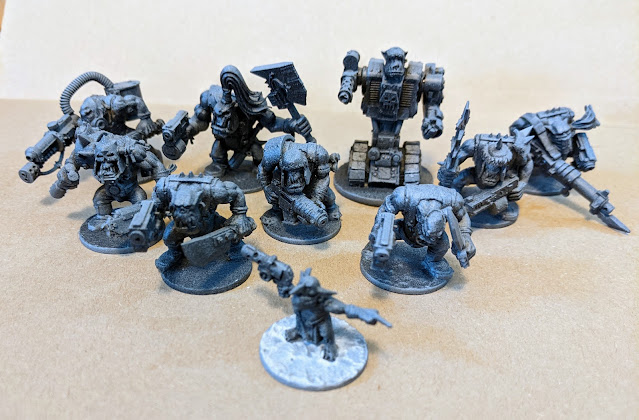 Now the actual painting process began. I mainly used cheap craft paints in dark red, brown, ochre, silver, black, yellow, and white. I did use a few actual miniatures paints, which were:
I flicked brown, black, and white paint at the models with a toothbrush. This might seem like a mad thing to do, but it's really just there to help create a feel of texture and weathering that should show through the coats of paint. It'll save a lot of time, especially on the metallics. This process took about 10 minutes. 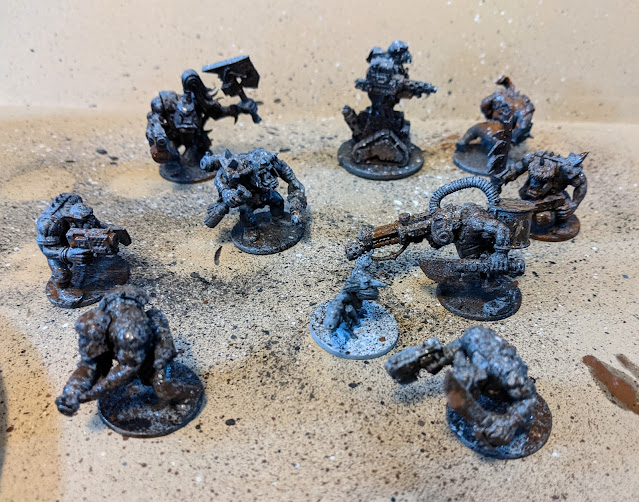 Next I blocked in the base colours using thin layers. I didn't both to make the coverage very even on anything but the skin, and I really just jabbed the silver paint (mixed with a little black) onto the metallics. As you can see, they look rusty and nasty, which is what you want for orks. I did this in a series of steps, each about 10-15 minutes, but the whole process took about an hour and fifty minutes. Counting flecks, that's two hours. 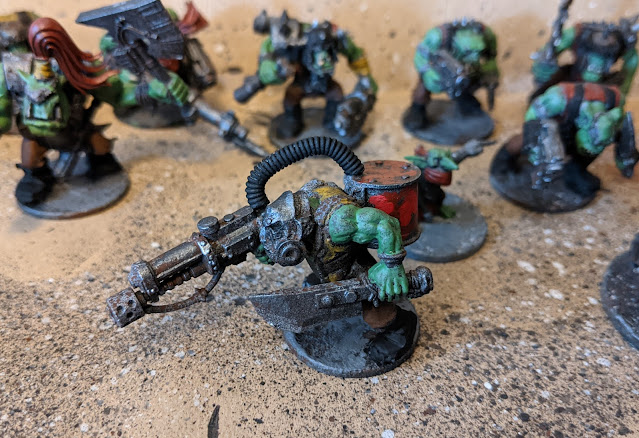 I did a tiny highlight of the skin with a mixture of green and yellow, and then I hit the whole model with that Agarax Earthshade wash -- including the green areas. It looks OK! This took about 15 minutes. 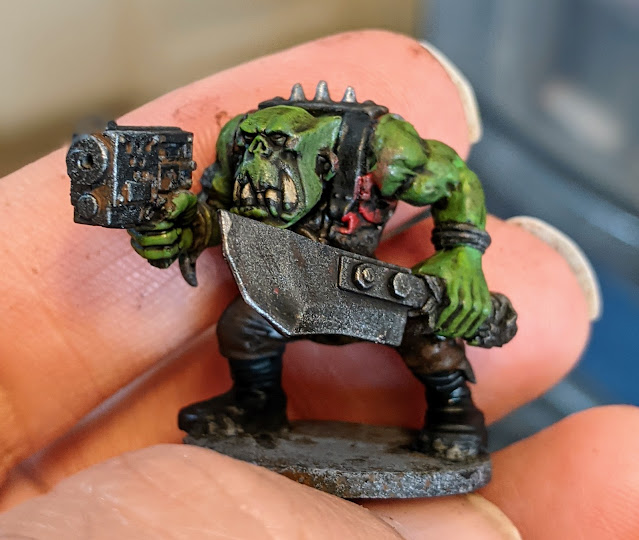 Then I went back and touched up and re-highlighted the skin with that green-yellow mixture. I also dotted in the eyes with ochre and then a little splotch of yellow in the centre. This took about another 15 minutes. 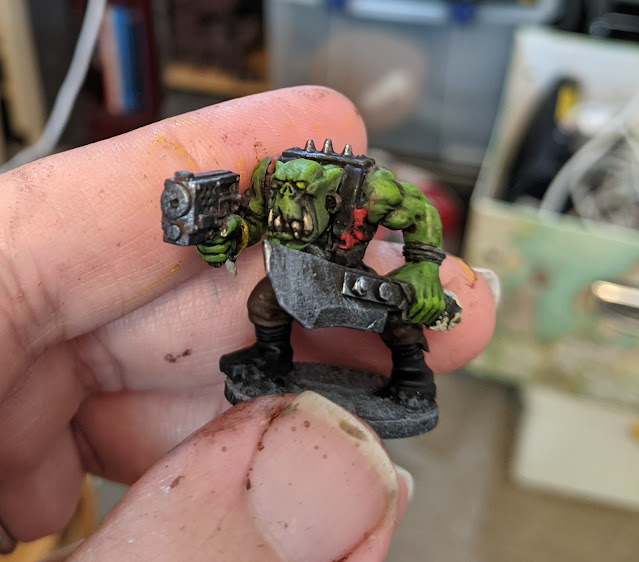 Finally, I took each model and spent a few minutes doing the individual details -- picking out pouches, straps, fur trim, goggles and so on. I didn't want them to be perfect, and I could have skipped it, but it didn't take that long and I think it helps, particularly on fiddly areas like the captain's goggles. I rehighlighted some of the metals as well and just touched up a missed patch here and there. This was actually one of the longest phases, taking nearly an hour.
When you add up all of that time, the process took just under three and a half hours. Adding in priming and some other things I'm probably forgetting, I'm happy to round up to four hours, or an average of 24 minutes per model. I think that they're pretty good-looking for that level of investment, and I

It's been nearly a year since I updated this blog! Honestly, most of my gaming content is on Twitter or Facebook these days. Still, if I want to tell a story with pictures, this is the place to do it.

Picture, if you will: Captain Horatius Mortsafe and the brave crew of the Simple Misunderstanding, reluctant to do the law's work but equally reluctant to get thrown into a black hole by the pirate syndicate to whom they owe an alarming amount of money, take a contract to hunt down galactic malefactor Chrysophon Marrs. Weeks of fruitless searching, and then: a lead! The elusive Marrs is getting ready to take ship from a small spaceport on a backwater world. Mortsafe, his first mate Berenice, and their band of space scoundrels are in hot pursuit!

But who do our heroes find waiting for them as they arrive at the launch pad?


Meanwhile, Marrs herself rushes among the different areas of the spaceport, getting her ship ready to make a getaway. The battle commences!

Now, I will confess that I played the scenario three times because I kept getting walloped in the early rounds, but once I got the hang of it it went pretty well. And I think the crew is looking good, which is nice!
So yeah -- don't expect regular blog updates, but when I have a story to tell, I might try to do one now and again.