In the eclectic process of collecting post-apocalyptic figures, I seem to have built up a couple of themed squads that have no obvious application. Some of these aren't necessarily post-apocalyptic, but could be generally sci-fi. I dunno. Anyway, here are two of them!


I bashed these guys together at some point either because I was planning an Orlock gang for Necromunda or because I wanted some ruffians for my Petersen's World 40K setting. The indigenous "Petes" have a Viking-like culture, but these guys are locals who moved to Landfall City looking for work and wound up in the dangerous dock gangs. I wanted them to have a certain element of primitive appearance, so I used GW Mordheim, Empire soldier and Flagellant sprues plus various weapons from the bits box (and some Warzone plastic pieces, but those are quite hard to spot). The odd man out is a plastic em-4 ganger I painted much earlier who still fits in pretty well with this bunch. His arms are from the Mordheim mercenary sprue again: is this the most useful kit GW ever put out?
Posted by James Holloway at 01:22 2 comments:

Junkyard January: Get your motor runnin'!

How can it be the apocalypse without some Mad Max vehicles? Actually, I don't have too many of these, but I have lots of various modern or near-future vehicles I press into service. Here are the most post-apocalyptic of them! 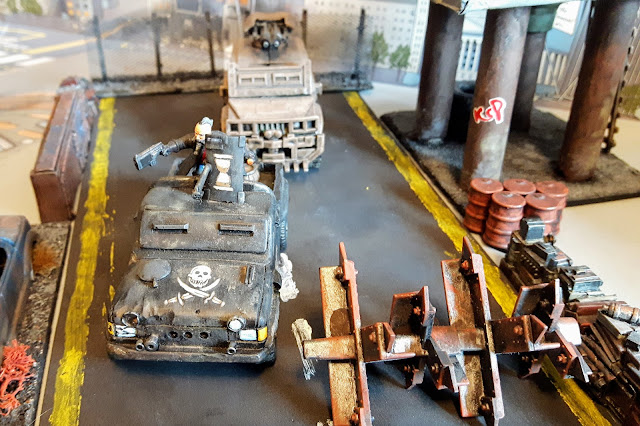 The truck in front is an old Grenadier Miniatures vehicle I've had since high school. The gunner is a converted Mordheim mercenary. The rear vehicle is a toy from the pound store (came in a pack of five!), up-armoured with some bits from the versatile Platformer kit and various things from the bits box.

I ... may have a drawer full of toy cars and model kits I want to use to create vehicles for post-apocalyptic gaming.
Posted by James Holloway at 06:04 No comments:

In previous Junkyard January posts, I've separated by theme. Today's mini-post looks at a particular manufacturer, ThunderChild. ThunderChild Miniatures make Wasteman, a humorous post-apocalyptic game I've been enjoying. I like their miniatures, but they are a little on the large side, so I tend to collect monsters, robots and so on, which could be any size.

Most of the previous entries in Junkyard January have been what you might call Mad Max type post-apocalyptic characters: a little fanciful, sure, but more or less within the bounds of scientific plausibility. This entry's characters presuppose a more Gamma World sort of a situation, and consist of all kinds of odds and sods that don't quite fit in with any of the rest of my minis collection. They're a collection of repainted Star Wars models, Necromunda guys, old Grenadier Space Rangers, Leading Edge models (for Living Steel) and some cool bug dudes I got off Lead Adventure and don't really know what they're supposed to be except I love them. Again, photos aren't fantastic, but it's all a bit of a rush job this week. And ... all future weeks until half-term. 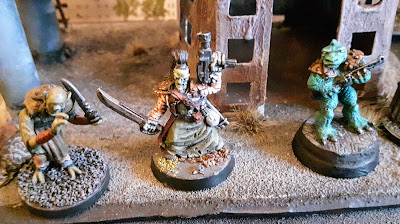 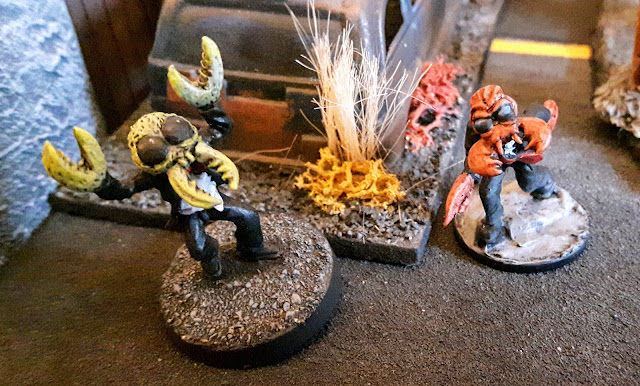 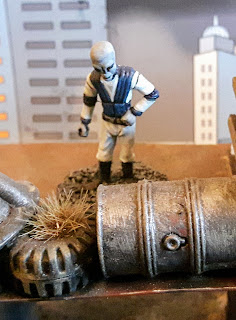 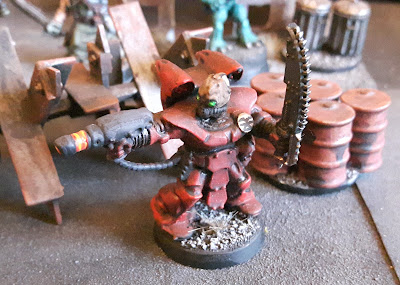 Posted by James Holloway at 02:49 No comments:

Junkyard January continues with some more models from my post-apocalyptic collection. 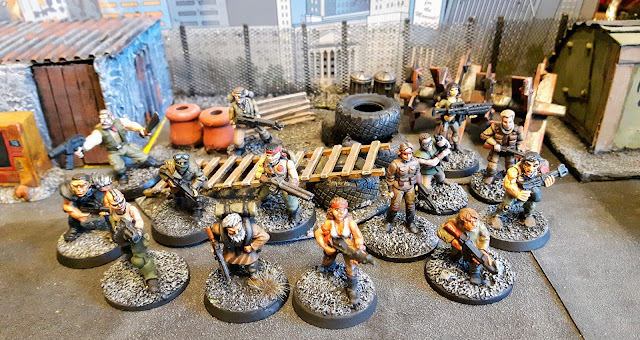 The wastelands are a violent, dangerous place, and there are lots of gun-toting men and women out there. These guys could be well-armed wanderers, caravan guards, settlement militia, bandits, you name it. The photo (which is a little washed out; sorry about that) features models from Citadel, Fantasy Forge/Scotia Grendel, Copplestone, em-4, Gripping Beast, Metal Magic/Moonraker and Prince August. Basically, this is my miscellaneous leftover models, plus a few Copplestone sculpts I missed earlier. 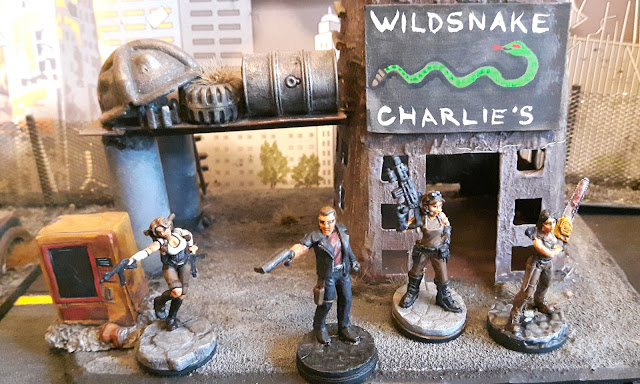 These guys, on the other hand, are your more heroic types. They're mostly Reaper Bones models, and some are more in the zombie-survivor direction than the post-apocalyptic one, but potayto potahto. That could be a whole other month. They're seen here in front of Wildsnake Charlie's, one of my favourite pieces of terrain. The main body of it was originally a feta cheese container, and the rest is till rolls, scrap card, bits of broken toys and spare parts from model kits, all stuck to a piece of scrap MDF.
Posted by James Holloway at 01:28 No comments:

Last time on Junkyard January we looked at scavengers, ordinary folks trying to get by in a harsh world. This time, let's look at savages, once-civilised people gone feral in the burnt-out wastes. I don't actually have as many of this kind of model -- or rather, I do, but I've combined them into some themed groups which I'll look at later.


You can read more about the Dungeonquest conversions here. Honestly, other than Chainy McChainface, they could be scavengers.

Posted by James Holloway at 05:06 No comments:

I have been painting post-apocalyptic models lately, and this prompted some friends to ask for photos of my whole collection -- which is not that huge, but still pretty big my my standards. I don't have a lot of room to take photographs, so this will necessarily be done in bits and pieces. As a result, I am declaring it Junkyard January, and am going to photograph as much of my post-apocalyptic collection as I can over the coming month. It's not huge by proper collector standards, but given my combination of limited budget and being really easy to distract it's one of my most sustained

Today I decided to start with what I regard as my 'core' post-apocalyptic models, the scavengers sculpted by Mark Copplestone. Some of these were originally sculpted for Grenadier and are now available from em-4 and Forlorn Hope, while others come from his own line, Copplestone Castings. They fit together well stylistically. 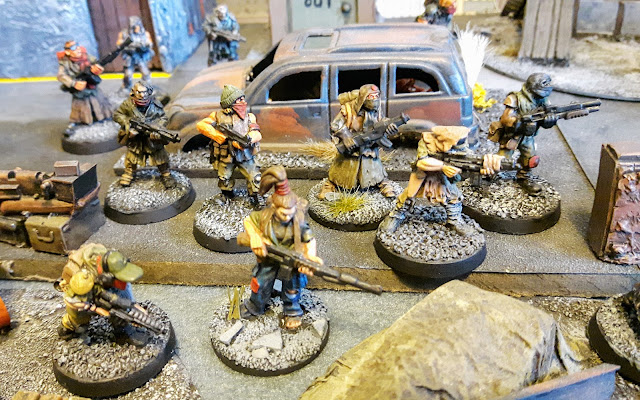 I figure that these guys are your rank-and-file scavenger types; in my mind, the gas-masked guy and the one pointing the pistol are the leaders. They appear in a lot of games as armed settlers, militia, mercenaries, wasteland scavengers and so on.

One of the things I like about post-apocalyptic gaming, and which I find reflected in Copplestone's sculpts, is the idea that everyone's a character. Even the rank-and-file guys are raggedly individual, and there are a lot of fun, distinctive models. I think the guy with the bowler hat epitomises that for me.

Posted by James Holloway at 01:51 No comments:

Gaming goals for this year

OK, so here's a quick rundown of what I plan to do in various gaming projects this year. Let's go. We need a photo, so here are some models I've painted recently:

I've done a few more models since I took these photos, so I'll try to find a time with good light to take some pictures.

Anyway, so here's what I've got ongoing:

I am going to conclude my long-running D&D campaign this year, hopefully with a suitably epic battle against a world-threatening antagonist. Before the end of the year, I will start a new campaign, although I haven't decided exactly what. Probably a post-apocalyptic game of some kind. I will possibly run a short game of something off-beat between the two.

I am going to try to make my local one-shots group a little more often, but they meet on Wednesdays, which isn't great for me.

I am going to try to complete a draft of The Magonium Mine Murders by the end of the year. And hopefully more!

I am going to continue to run my monthly game, and I'm going to make a serious effort to finally run the kind of event I really want to with the upcoming weekend event I'm currently writing for. I may try to run a short-run live-action Unknown Armies game, but no promises.

I am going to complete my Age of Sigmar challenge -- I need to complete a unit of 10 Marauders, a unit of 5 Chaos Knights, and a lord with a demonic mount. I'm currently partly done with both units, but I need to sort out the character.

I am going to finish my Norman army for SAGA, which means painting another 8 archers and (sigh) a whole load of knights. I don't know why I hate painting horses so much.

I am going to begin at least one new fantasy army project: watch this space.

I am going to try to paint at least one just-for-fun model each time I put a batch of models in for priming.

So those are my resolutions for this year. Manageable.

Posted by James Holloway at 03:51 No comments:

Email ThisBlogThis!Share to TwitterShare to FacebookShare to Pinterest
Labels: admin, thinking out loud

Works in progress: a periodic update

Happy new year, everyone! While we're nursing our hangovers, let's look at some blurry photos of half-complete miniatures. I haven't done much more painting over the holidays, but I haven't been idle. Here's a quick update on what I've been working on.

For my ongoing Age of Sigmar project, I've assembled the last ten Marauders. These are assembled from a mixture of Wargames Factory Vikings, Frostgrave cultists and barbarians, Gripping Beast Dark Age warriors, GW Flagellants and whatever I had lying around my bits box. I have done this lot without a champion, standard bearer and musician, so they'll be an upgrade to the existing unit rather than a unit on their own, but I can always go back and change it if I want. 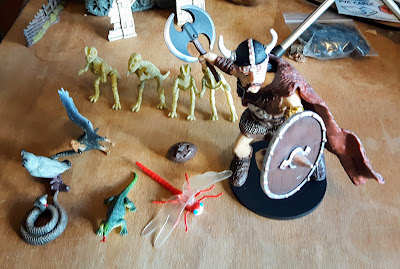 I bought all kinds of junk for an upcoming frugal gaming post and am working on getting it ready to photograph. 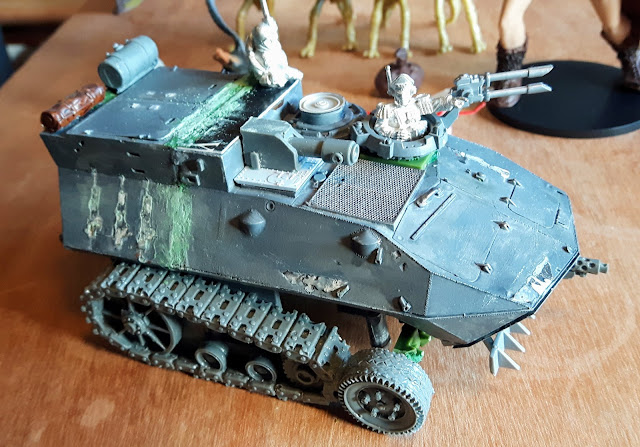 I started building something for a scenario and it turned into something completely different -- looks like my Neo-Sov/Petersen's World PDF guys are getting a bigger troop transport.

This is current up to 1 January; in the intervening days I've done a little painting, which I will show off over the coming week.
Posted by James Holloway at 08:47 2 comments: